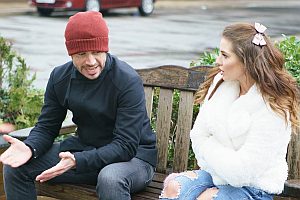 One by one, Ken's assailants were eliminated. After initially thinking the attacker would be a secondary character, I came to the conclusion that it was Adam. I noticed that Adam was continually focussing on one after the other of the suspects, trying to redirect attention off himself. He didn't want to be blamed for something "someone else did" and at the end, when he realized Ken's memory was starting to return, it took very little to persuade him to make plans leave town.  Of all the family, he had the most convenient opportunity and possibly motive though Rosie thinks his main MO is sneaky and underhanded. But someone else was anxious to get away from the heat and returning memories, as well.

I agree with Rosie's assessment of Adam, but an argument can quickly get out of hand and accidents happen. Ken's memory took a long time to return and when it did, in flashes, and by the end of the month, we *finally* got the answer we've all been waiting for as each suspect was eliminated. Every one of them were questioned and most of them were arrested, making the police look ridiculously incompetent, but that's nothing new for the Weatherfield Police. Craig had better look sharp or he's in danger of becoming a joke on the force, as well. Or he'll end up running rings around them all and become a super-cop! I'd love to see that. 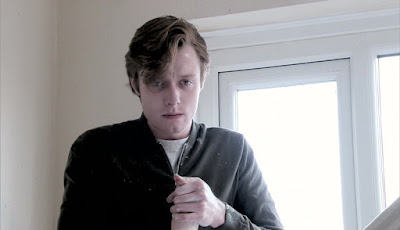 So what do we all think of whodunnit? They pulled a fast one with an about-face at the end, and Daniel was the culprit all along. The scenes with him in his old flat with Ken were very dark and disturbing in that you could really see how broken and damaged Daniel really was for his mother's abandonment and Ken not being there all his life. The huge twist here was the precisely timed arrival of Denise on the scene! I had known she'd be back at some point but had no idea it would be at the climax of this storyline. Well done, ITV for keeping that under wraps. If Denise hadn't come through that door when she did, Ken might have gone out of it feet first! A lot of things kep her away all these years. None of them were very good excuses if you ask me but that's how the storyline was written.

Ken won't press charges  and swore to attest to the same in court, frustrating the police, and he will both forgive and try to help Daniel who has a lot of demons to face. I never did think Daniel killed his mother because that would make him un-redeemable and he'd have to go and Rob Mallard is one of the best additions to the cast in years. He and Daniel must stay! I do hope they keep Denise around to 'splain things even if Daniel might not want anything to do with her now. 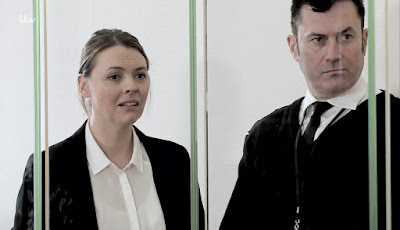 Tracy really came into her own, I thought. As selfish as she is and has always been (and isn't really going to change that much), she decided to take the blame for Ken's assault because she worried that Amy was the one that did it. This included being unable to resist the charms of bad boy Rob Donovan, the man that got away. Ok, the man she made go away when she turned him in over Tina's murder. Rob is the love of her life, the one man that really did "get" her and mostly was able to get past her faults. If he couldn't, he'd give her a dressing down for them but loved her anyway. Not even Robert the Sanctimonious was able to do that. Rob also did the right thing and turned himself in to save Tracy and Amy by default (because she'd have effectively lost her mother to prison).

Self sacrifice worked. Ken had changed his mind and was going to give her the inheritance early so she could buy the florist shop and he still did it once he knew she didn't hurt him and realized she'd (mistakenly) taken the blame for her daughter. It's good to see Tracy enter her forties with a business of her own and a flat of her own. If she and Amy move out of Number 1, that leaves room for maybe Adam or Daniel to move in. I don't know if Adam and Daniel will be able to share the same flat after all this but I am equally unsure whether Adam and his resentful chip on his shoulder can share a house with Ken. 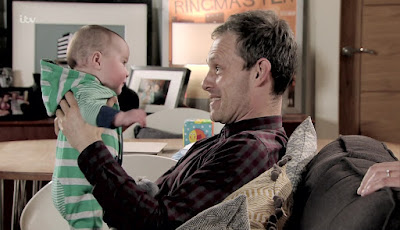 The existence of baby Oliver has become the turning point for Nick's delusional paranoia. He's never got over Leanne's connection to Peter and now with Steve in the picture as well, he's been pushed over the edge with his jealousy and insecurity into the depths of paranoia and I don't think it's got anything at all to do with his brain injury. David had it right. Nick can't accept and appreciate what he has, a woman that loves him and he keeps picking at it until he's pushed it away. He doesn't deserve the happiness he's been given.

Why is Nick so insecure about Leanne? Because I think he knows damn well that though she loves him, he loves her more. He's never got over her but she had other big loves in her life that weren't him. She seems  to go back to him when she's had a knock back, someone safe, her first love. Then he hurts her yet again. At some point, she's got to end it for good because he's never going to change. He's every bit that manipulative, selfish, passive aggressive kid that he was when he first got together with her as a teenager. He really hasn't changed, just got older and more arrogant. I've said it many a time. That is his downfall. He finally realized it.

Leanne tried a last ditch effort to get everyone to make peace, taking them all to a beach. But Leanne found out he could have given Peter an alibi and didn't and then the men ganged up on Nick and pressed every insecure button he had until he contemplated walking out into the sea like they suggested. I did think Peter and Steve were a bit harsh even if Nick had pushed them too far. Telling someone to walk into the sea, to kill themself really isn't right. He didn't really try to throw himself into the sea but he got stuck in quicksand and it was almost too late. Nick survived, as I thought he would but it was a near miss. I couldn't see them killing off one of the Platts. They've recasted before so they can get away with doing it again in the future and I'm sure we've not seen the last of Nick Tilsley over time. 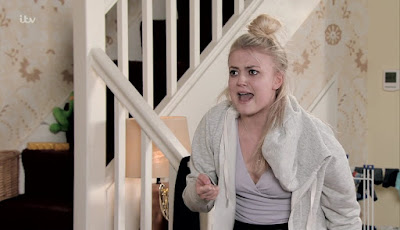 Nathan put his end game into play and he's farming young Bethany out to his friends, sex for money. She was shocked to her core after the first time, unable to believe that a man that said he loved her could allow, nay, expect her to have sex with someone else, let alone let it continue.  Yet, he's got such control over her that she didn't walk out the next day. The twist that Neil, that friend of Nathan, is a police officer, crooked as a corkscrew, was unexpected and, frankly, not just a little sinister.

Sarah tried her best to get Bethany away but Nathan's hold on her is now too strong. She was pressured into it. Sleeping with strangers is not what she wanted. Nathan even ramped it up to having her in a room with three men! Good grief! That's pretty grim, isn't it? Shona, as we all predicted, finally realized who Bethany was involved with and came out fighting. She got beaten up for her trouble but managed to alert the Platts who rescued Bethany but it wasn't in time to prevent her having to sleep with three men in a row. She's determined to be on Nathan's side and refuses to see him as a villain. Yet. The story isn't over, though it's going to be about realization and recovery from here on in. 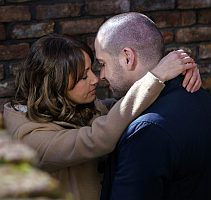 Maria has gotten herself tangled up with yet another wrong'un, a love rat who might say all the right things and make all the right promises but is going to hurt her badly in the long run. Eva rushed Aidan into a commitment before he was ready though likely he'd never have been "ready". He strikes me as that kind of man.

Be that as it may, I think Aidan lapped up Maria's crush on him as a way of rebelling against Eva's domestication quest. She's always so full on, is Eva and always ends up getting hurt. She pushes too much too far too soon and then wonders why she keeps getting dumped. Maria always seems to go for men that have commitments or feelings for other women, and even if she only finds out about it after they've gotten together, seems to have the attitude that if the fella isn't cheating on his woman with her, he'd be cheating with someone so it might as well be her. It's led to heart break for her in the past and I don't anticipate any different this time.

Eva is determined to get a ring on her finger and we all know Aidan won't do that. Nor will Maria get one on hers, I'm willing to bet. But when Eva finds out about Maria, and she will of course, it isn't going to be pretty.

Brian and Roy are bickering and rubbing on my nerves, mainly because I really don't like Brian. He's such a buffoon. I put him in the same boat as I used to put Derek Wilton. Both actors are very good but I really detest the characters and only occasionally find Brian funny. I can't see what Cathy sees in him. She's got far more about her, daft as she can be at times, than to hook up with him. I hope they aren't trying to make them into the new Mavis and Derek because they don't have the charm. Cathy was much better with Roy. Too bad Roy just wasn't ready, but it's understandable.

June will be an interesting month. Bethany's story will continue as we see her still under the throes of Nathan's psychological hold over her. Will Steve sell the pub to Peter in the end? I think he will now that Nick is out of the picture. Will Ken throw Daniel to the wolves? Not likely. How will the rest of the family handle the news and will Adam percolate even more resentment towards his grandfather? What about Todd and Billy? Will Todd relent and help Billy raise Summer? Will Anna ever let Kevin touch her again? Will Phelan ever pay for his misdeeds?

Stay tuned for another month of Corrie and find out!