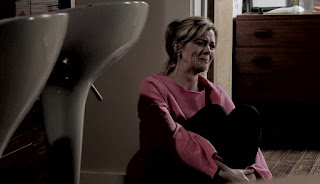 This month, Coronation Street's storylines were quite varied. We had such a climactic last week of May that June has been a month of fallout  and followup for the most part.

Nick is gone and Leanne is left alone. She can't get her head around him leaving and leaving so quickly and he's gone for good. She's sure he'll cool off and come back but he's selling his half of the Bistro and cutting off business ties. Leanne will soon have something else to distract her, though, because Eva's found out about Maria and Aidan's affair. 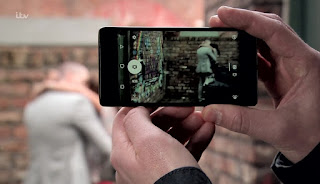 Adam caught the two snogging in the ginnel and took a photo, intending on using it for blackmail. Even that didn't stop Aidan. He's determined to have it both ways, stringing Maria along with the usual promises to tell Eva the truth but never quite getting there. Except Eva found out because Aidan left his tablet hooked up to the television after a session of afternoon delight and it's obviously hooked into his mobile phone account. He destroyed the pay as you go phone so Maria sent him texts to his normal phone that popped up on the television screen leaving no uncertainty. Eva and Leanne were both there to see it. Busted.

Here's the twist. Aidan and Maria don't know she found out and Eva is now the one doing the stringing along, intent on revenge and she's pretending to Aidan that she's pregant (due to the fact that she thought she was but isn't)  In her revenge, it's likely that Toyah and Leanne will be her wing-women. She vows to get as much out of Aidan as she can.  Leanne gets to take out her anger at Nick and direct it in the guise of sisterly outrage in Aidan's direction.

Johnny got a diagnosis of Multiple Sclerosis and freaked out, as you do. He doesn't want to be a sick old man and have a young, vibrant wife have to look after him so he broke off with Jenny. A stern talking to from Kate gave him second thoughts but he's not been able to persuade Jenny back yet. I don't blame her. He really hurt her and let her down and she's had trust issues going back years. One of the best parts of this storyline was Rita going down the Mama lioness route and tearing Johnny a new one after he hurt Jenny and then, after getting drunk, being one of Jenny's wing-women, along with Gemma, when Johnny tried to apologize. Barbara Knox doesn't get enough really meaty scenage and it's glorious when she does! I do hope Johnny and Jenny find their way back to each other in the end.

All the Barlows except Ken are spending a lot of their time hissing and spitting in Daniel's direction after what he did to Ken. Poor Daniel couldn't deal with his mother's return and insisted she leave him again and Sinead won't have anything to do with him either. He's lost his place at Oxford and his family mostly all hate him. Is it any wonder he jumped into a mess of cocaine and other illegal and legal substances and overdosed? It was surprising when Adam actually cared enough to look after him and stay over the night he left the hospital, just to make sure there were no after effects. I don't think Adam likes him any more than he did, but he's family and Adam doesn't have a lot of that left, does he? Turns out, blood really is thicker than water. I do hope Daniel does get counselling. He needs it badly.

Bethany was yanked out of Nathan's flat but Nathan still has full control over her. He was out on bail and kept up contact, first, face to face and then through Neil. He made plans to wisk her away to the Continent. She thinks it's a romantic gesture and they're starting a new life. It isn't. He's selling her to the highest bidder. As she was leaving to run off, Mary tried to stop her. I loved that scene, with Mary telling her about her own past and desperately trying to make her realize that everything Nathan is doing is wrong. It didn't look like Bethany took it on board but it sowed a seed. When she admitted she didn't have her passport and discovered he was sending her off to Belgium alone to stay with a "friend", I think she realized what was he was doing to her, the truth and the whole truth. Mary was right. He was using her.  I can only imagine the broken heart coupled with the panic as Mary's words echoed in her head. 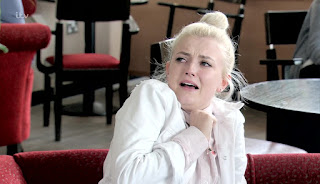 She did the right thing and went to a family in a service station for help and Nathan was arrested.  Now she's got to find a way to deal with it all while we wait to see if Nathan goes to trial. We've been promised he'll pay as will the crooked cop but I would imagine the road to conviction for both of them will be full of potholes before the cage is closed on those two. 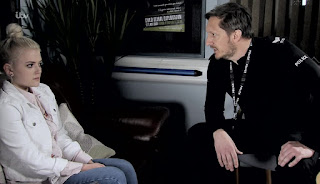 Really good storyline, I think. I've enjoyed it a lot. Excellent performances all around. I know some have been upset that a corrupt police officer has been brought into it as a dramatic twist. They hop up and down and holler that it will put girls off from going to the police if they're in a similar position but it's television, it's drama, and it's never going to be 100% realistic. I think it was a good twist and it will be all the more satisfying to see Neil behind bars. Too bad we won't see the whole truth, all the inmates taking their own brand of justice out on these two men for what they do to young girls. Because they would, you know. Something else I wish and hope we see, that police inspector that dealt with Ken's case, DI MacKinnon, remember her? She grew on me. I really liked the character and I hope we see her again. I'd love to see her be the one that takes down her corrupt colleague! We have a different female police officer working with Sarah at the moment, though, so I suppose that's not going to happen. 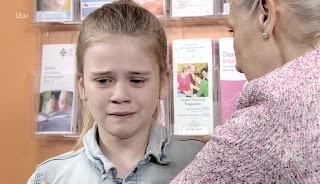 Billy and Todd have met the daughter of Billy's dying ex boyfriend, Drew. She's called Summer and she's quite a character. I did think she was a bit too calm and collected for a child who's dad is dying but never mind. Todd, being the sarcastic tongue that we all know and love, made a crack about putting her in a home but didn't know she'd overheard and she's now not predisposed to be taken in by them. I'll say one thing, if they do adopt her, they'd better find a flat of their own because I don't think Eileen will have yet another mouth to feed under that roof! Summer is 9 years old. She might be a friend for Max, Asha and Aadi if Billy and Todd to end up taking her in.

I have to wonder why Drew didn't have guardianship in place for her a long time ago, though. He didn't get sick overnight after all and I got the impression he was sick for awhile before he finally approached Billy here a month ago. He would know what his parents were like, surely he would have made it a priority to find a guardian for Summer rather than have his homophobic parents take her. 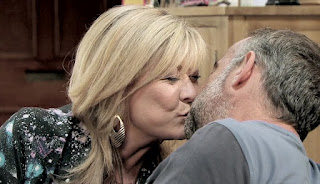 In other news, Seb seems to be out of juvvy with a new case worker. Anna is furious that Faye continues to defy her. Kevin is getting more and more sexually frustrated. He's not had a shag in a very long time, since Anna's accident. We saw him looking up the side effects of the medication she's on. It's an antidepressant which can indeed have an effect on the libido.  So Kevin is going to take another chunk out of her self esteem and go sniffing around Erica, from the look of it. Once he got a taste for it with Natalie Horrocks, it didn't take much, just a bat of the eye and some flattery and he starts panting like a puppy dog. Here we go again.

I'm really not all that interested in Anna and Kevin nor do care about Cathy and Brian. He's far too rude, selfish and ignorant to be at all enjoyable for me. The actor is a little belter, but the character is repugnant, too much so for me to "love to hate" him. 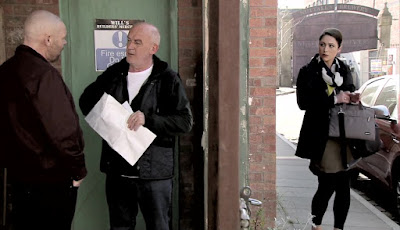 Another interesting storyline has started. Pat Phelan's past comes back to him. He met Seb's case worker and it turns out he knew this woman, Nicola's parents. Not only that, he had an affair with her mother and he's pretty sure she's his biological daughter. There was no delay, no secrets kept for long, nobody sneaking around. It came out fairly quickly. I really like that Nicola stood right up and confronted him with it straight away rather than keeping it secret that she knew, and that she has had the reaction you might expect from normal non-soap people. Shocked, but not about to go out and self destruct, either. Eileen took it well, knowing it's his past rather than have a hissy fit like soap characters usually do. She's being very supportive. I expect she will turn out to be his daughter.

Phelan is a villain, he's done nasty things and in the long run he will have to pay. But finding his daughter, will she end up being his conscience? Will, in the need to be a better man, she be the catalyst to him confessing to things like leaving Michael to die and killing Andy? I reckon he'd only do that if somehow Nicola finds out first, at least about Andy. If Andy's really dead. It's all up in the air and it's going to be great fun speculating on this storyline. 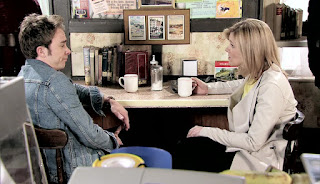 Lastly, David has found out that Shona is Clayton's mother after finding Shona at Kylie's grave. She might have helped Bethany and she and David were beginning to fall for each other. I did like the scene where David talked to Leanne about finding someone new after your loved one died. Because she got together with Nick after Kal died, she'd know what he was feeling. But when he found out Shona's secret, David can't get his head around Shona being the mother of the kid that killed Kylie. It would be pretty strange, that's for sure. How could the kids manage it, growing up knowing that, as well? I realize she was not the one that made Clayton kill Kylie and it's really not her responsibility but it's difficult to separate the two. Anyway, she ran out of town but I don't think we've seen the last of her.