The Madness of Michelle 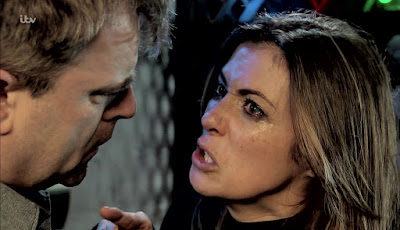 I don't like Michelle much, I never did. I always thought she dragged Steve down with her drama. Having said that, I do feel badly for what she's been through, losing a baby and then finding out her husband has a newborn by another woman, not even a woman he had a proper affair with. There was no love between Leanne and Steve, it was a pity party. It didn't matter that Steve thought he lost Michelle. She was on her way out of town, and turned around a few hours later, that's barely enough to qualify being "on a break". He didn't know that at the time but he didn't waste any of that time, either. She's allowed to feel angry and betrayed.

Yes, I felt terrible for her. For about a minute. Until she laced into Leanne and gave her a bloody nose. My sympathy slipped a little but her reaction was understandable. The instant she went shrieking it all out to everyone in the pub,  she lost a bit more of my sympathy and when she assaulted Eva, she lost it all. I can't blame her for being angry but her attack on Eva was uncalled for and I don't care that she was pissed that Eva knew about the baby.

So did Liz, so did Toyah and they came away unscathed. Locking Liz and Steve out of the pub and threatening to take half of everything was vindictive but a less violent reaction but I doubt very much she has a legal right to take half of everything. Liz owns half of the pub so I do hope the writers remember that and only award her half of Steve's share. I don't think she should have half of Steve's share of the cab firm either, because he owned it long before he married her but again, where Tim owns half, she should only get her manicured mitts on one quarter.

She's out of control and all the things she's doing and will do in the near future are not winning her any votes of sympathy from me in spite of her situation being indescribably dire. I get that she's out for vengeance. What Steve's done is much worse than her flirtation and near affair with that Will fella. Had he told her from the start what happened, he probably wouldn't be in this mess. Would he have lost Michelle if he'd told her about the one night stand? Possibly but possibly not. When Leanne then found that she was pregnant, it would have hurt Michelle, but she probably wouldn't have got pregnant herself. She'd have been too angry with Steve to want to have a baby with him, providing she was even still living under the same roof as he. 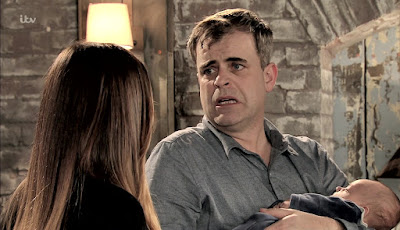 We all know Steve is a bit of an idiot. He continually lies, thinking he's doing it for the right reasons. He's not vindictive, he's not dishonest for the sake of being hurtful, he's just a weak person and doesn't want to upset the applecart. Yet his lies always, *always* make things worse when they're found out. He didn't tell Michelle about the one night stand and therefore, when Leanne found herself pregnant, he was in an impossible situation once Michelle got pregnant as well. He really did think he could keep away from the baby, and had their Ruairi lived, he probably could have managed it. But he held that child and he knew it was his and his heart melted. He did the right thing but it was far too late.

From spoilers, but without giving anything away, Michelle is going to wreak havoc on Steve's life, I think, far more than is necessary but she doens't do things by halves. I have a feeling I'm going to be doing a lot of shouting at my screen for the next while.