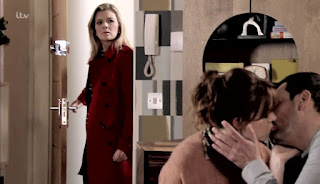 It had to happen. Of course Toyah and Peter's affair was going to be found out by Leanne and it wasn't going to be pretty. Leanne swears she's not jealous and I don't think she is but that affair has been going on for a year and Toyah never told her sister. On top of that, she'd found out Toyah never told her about the five IVF attempts. I can fully get that contributed to the ruination of her marriage. That's such a stressful thing to go through, even more so if what Toby said was true, that he was only going through it for her. She was vulnerable and latched on to Peter. She'd have known him, of course, and he *is* charming when he wants to be.

But you'd think knowing all the stuff he put Leanne through would make you more cautious, wouldn't you? And just running into him by chance while she was in Portsmouth, visiting from Liverpool? What are the odds. I know, only on a soap. Never mind that. Leanne and Peter had chemistry when they were together. I've yet to see it with Toyah and Peter. Now he's knocking around with this Chloe, driving her places and taking large tips and already they have more chemistry than he's got with Toyah, at least I think so. But then again, she's kind of Carla-ish isn't she, with that long dark hair and stylish manner?

Leanne mentioned that part of the reason she was upset was that she didn't want to see Peter ruin Toyah's life like he did her, and others. Probably true. She's got other things to worry about. There's Nick still fizzing with rage, anxiety and jealousy over that wee baby not being his. He's sure something is going to happen to take it all away. He wouldn't have to worry if he was convinced Leanne loved him as much as he loves her. I never thought she did. She always turns to Nick on the rebound from one or another or when she's lonely. 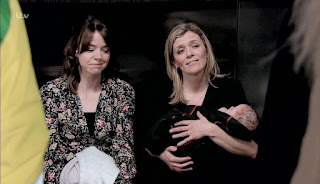 Since nobody on soaps ever gives birth in a hospital, Leanne had to do it in an elevator (lift), bickering with Toyah in between contractions. Coincidentally, there was nobody in the builder's yard and nobody in the garage that could lend a tool to get the doors open even though it was the middle of the day. There's the debut of baby Oliver! What a cutie patootie. Never mind that he's the size of a 3 month old, they can't use real newborns on set so we have to put that one aside. I did laugh at Toyah remarking how tiny he was, though.

Realistically, Leanne was sent home the next day. That's how it happens these days. Then she was inundated by company, though of course the immediate family was going to be first up. I thought it was a bit insensitive of Michelle to go over. If the tables were turned, she'd have thought it was awfully cheeky and dead awkward if Leanne had turned up on her doorstep mere weeks after having a stillborn baby. But the biggest surprise of all was Steve blurting out that he was the baby's father in front of everyone in the Bistro! Wow! I did NOT see that coming. David put the baby in Steve's arms to go help Nick and Steve's face just shouted his emotion, holding his son for the first time. How could you not tell from that look? 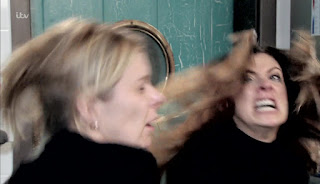 Oh it's all going to kick off now! And boy, did it ever. Steve couldn't hold back and told everyone it was his son. Nobody could lie and say otherwise and Michelle, well she was metaphorically kicked in the gut over it, as you would be. I can't imagine being in her stilettos. It has to be the worst kind of betrayal to find out your husband has a baby son with a neighbour after you've lost your own child. I expect that had Ruairi lived, she wouldn't have gone so far off the deep end. Not that it would have made it better, but she wouldn't have had the weight of grief to deal with at the same time.

I don't like Michelle much, but I fell terrible for her. For about a minute. But the instant she went shrieking it all out to everyone in the pub, she began to lose my sympathy and when she assaulted Eva, she lost it all. I can't blame her for being angry but her attack on Eva was uncalled for and I don't care that she was pissed that Eva knew about the baby. So did Liz, so did Toyah and they came away unscathed. Locking Liz and Steve out of the pub and threatening to take half of everything was a better reaction. She's out of control and all the things she's doing and will do in the near future are not winning her any votes of sympathy from me in spite of her situation being indescribably dire.

Adam sets up a law firm with Todd? Well it seemed like they would, then not, and I can't remember if it's on or off at this point. Todd did seem pretty disgusted with Adam selling drugs to finance it and cheating on his exam but the sale hasn't happened yet. I have a feeling Adam is going to bite off more than he can chew with this scheme. I don't get it, either, all this scamming and scheming for money. He's a greedy, underhanded, sneaky so and so and he has the nerve to accuse his grandfather of treating him badly because he was the son of Mike Baldwin. This is the man that spent nearly a year looking after him in a foreign country. Well, he's proving that he's Mike's son and far worse. Even Mike Baldwin had some scruples. It doesn't look like Adam has any.

Sinead and Chesney were clearly cooling down and quickly. She didn't want to hurt him but couldn't stop it. Chesney thought a new stylish hair cut would help. Poor, deluded bloke. I don't know if Sinead and Daniel will go the distance but maybe it's what they both need right now. Ken seemed to put all his hopes and dreams in Daniel, the son that might actually do something with his life, something Ken always wanted to do and never managed it. But now he's turning into just as much of a disappointment as all the others, including himself, getting attached to a woman that's not his intellectual equal, in Ken's view. Like father, like son. And before you jump up and down and say that Sinead is, too, a smart woman, I agree and she probably could go to university if she'd wanted to but her talents are more artistic.

I like Daniel. I like that he's quiet and polite and studious and smart. I like that he can also stand up for himself and not take any bull from Adam or his father. He might regret that his father is disappointed but he's going to do what he wants just the same. He's a lot stronger than Ken, I believe. I do hope we find out what happened to his mother some day, though. Daniel's occasional bouts of anger also seem quite reasonable when you think his mother had abandoned him for no apparent reason that we know yet, and of course, his father was never around either. 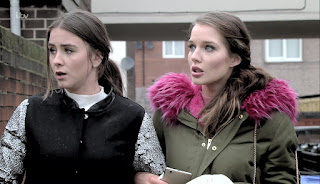 Rosie Webster is back on the street and heels first into a load of trouble. I truly believe she'd have been naive about a package from her boyfriend. But I don't believe that it wouldn't have been discovered at the airport. They Xray and have dogs sniff at checked luggage just as much as they do carry on bags. It wasn't disguised at all, just in her makeup bag in a package. Chances are that makeup bag was carried on the plane as well. That was something I really didn't buy.

But other than that, it's good to see Rosie and her daft, shallow self back. She makes me laugh.

Brian is still drifting about. He wore out his welcome at Norris', and he's rapidly doing the same thing at Roy's, freeloading, using the flat as a hotel, helping himself to Roy's food. I really dislike that character but the actor, Peter Gunn, is superb. Now it looks like he's going to be scratching at Cathy's skirts. I don't think they'd make a good couple. I think he's far too pompous for her. I really find it hard to believe she'd put up with him.

Phelan has been on a quest to ruin Kevin. I'm not really sure why, though. Kevin doesn't like him and shouts at him now and then but he's no threat. That's usually what brings Phelan to these schemes to ruin someone. Ok, I do see that the CCTV catching his and Todd's conversation about the scam about the flats would make it necessary to take action and that's why he burned the garage hoping to destroy the laptop. He's not smart enough to realize that footage is probably backed up to a cloud service somewhere, is he? At least, it would be in the real world.

Now he's using a kid, Seb, who is probably very much like he was at that age. Someone that he can get to do his dirty work and Sep will match him every step of the way, or at least he'll try. I don't see the point and I wish he'd fade into the distance. Seb is a thoroughly dislikeable little (well, I can use a few words here that are probably not safe for work so I won't. Use your own favourite label!) Faye can't see that he's using her but she's not that different from a lot of teenage girls.

Jenny is making waves at the factory and she actually came up with a Really Good Idea, the mastectomy bras. Johnny went along with it but Aidan has his doubts. Then the client decided they wouldn't make enough money even if the public relations would be priceless and Jenny isn't going to take that lying down. I can't wait! The old Jenny is back, isn't she? She's always had a scheming side to her. It looks like Maria is going to come out of the prison gate in a fighting mood, as well. We've only seen a couple of scenes with her on the inside but she's simmering on a low boil and I can't blame her. Aidan hasn't treated her very well even if he says the right words. If he loves her, he would have left Eva even if Maria was going to be away in prison. Problem is, he loves Eva, too. I'll be very disappointed if he does get together with Maria in the end though I won't be surprised.