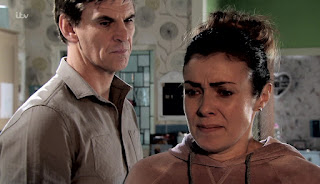 This month, many of the characters on Coronation Street seem to be angry and unhappy. The ones that aren't just seem a little glum.

First we have Michelle, who, it has to be said, does have a pretty good reason to be pissed off. She was grieving for her stillborn baby boy when she found out that her husband fathered a healthy child with a neighbour after a one night stand. The heir and the spare, so to speak. How could he possibly feel the loss of their child as much as she did if he knew he had another one? That's not fair, mind you, but she's so hurt and betrayed that she'll say and do anything. She's determined to take Steve for half of everything he's got. She even tried to get back at Leanne by shagging Nick but he rejected her advances after a kiss so she fled to Devon to see Carla.

Why do people think that's the thing that's going to hurt them the most? It's only money. Yes, it's Steve's business and really, Michelle only has a claim on his half but Liz is going to sell her half as well to support him. I wonder if that means Michelle would get half of Liz's half? I hope not. And I hope the sale of the Rovers doesn't happen. Because...Peter Barlow? Seriously? If he wasn't an alcoholic, I'd say he might actually make an ok landlord but not with his tendency to slide back into addiction, even if this time could very well kill him after he poisoned himself on Jim McDonald's prison brew. I think Steve and Liz have made great pub owners and I'd be sad to see that era end. 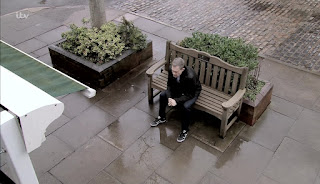 The fallout from the paternity revelation is affecting Nick and Leanne, too. Leanne doesn't know what the right thing to do is. Should Steve stay away from baby Oliver like they originally planned? But if the secret is out anyway, why not let him see his son now and then? Personally, I think that's the right thing to do in this case. Nick needs to suck it up and grow up but Nick is ever the spoiled and entitled brat that Gail brought him up to be. He'll sulk and be sarcastic and moody, using every passive aggressive tool he's got in the box to manipulate Leanne's emotions, already in a mess due to post-partum hormones. He's already used to sharing Simon with Peter, it shouldn't be that far a leap. I guess he doesn't like being the perennial bridesmaid instead of the bride.

Baby news is also germinating for the Barlow family. One shag in the factory storage closet and Sinead's in the club, too. She did say they tried to be careful. I do wonder how that happened, though. Does she carry condoms around in her pocket? Did formerly virginal Daniel carry one in hope? I don't really want to know, too much information. Let's just go with the Oops method of birth control and leave it there. After all those years with Chesney, you'd think she'd have been on something more permanent like a pill, an injection or an implant, though. Even if they hadn't been sexually active for a few months, you don't stop taking a pill if you're in a relationship, just in case.  It would just seem a bit odd that a committed couple would be relying on condoms for years, knowing they're not the most reliable method, as she soon found out.

What to do? They talked about it sensibly and decided on an abortion but Daniel ended up changing his mind because he is pretty sure she actually does want the baby and maybe she'd end up resenting him for pressuring her into it. You know, he also looks a bit trapped. He had his future all mapped out with university and then finding a career and now he's got to be responsible for a child which could seriously curtail his plans, especially after being accepted to Oxford. Now he's going to turn it down, much to his father's dismay. Ken thinks he's just ruined his life, much like he did sticking with Deirdre. Uh oh. That rant is going to cost him. 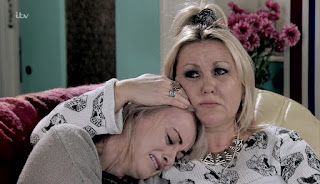 But the rant also hit home with Sinead who came over all noble and told Daniel she had a miscarriage and he should go to Oxford after all. She lied, she had a termination and her lies didn't last very long. When Daniel found out he really lost his temper and I can't really blame him. They're done and she blames Ken for making her feel so guilty that she went through with it. They had kind of mentioned her moving to Oxford but Daniel seemed intent on staying put and raising the baby. Really, though, they could have moved to Oxford and she could have had maternity benefits. But it's over now, no baby, no relationship. I hope they don't get back together, this issue would be hanging over their heads and the resentment would grow to huge proportions. 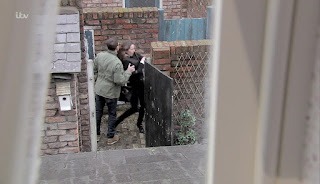 Then there's Peter Barlow. He's no stranger to juggling two women, is he? He's just the boy that can't say no and has a long history of it from that aspect. Lucy and Shelly and bigamy, anyone?  All because he couldn't bear to tell one or the other that he couldn't make a committment because of the other one.  Let's see. Then there was Leanne vs Carla, and Carla vs Tina and now it's Toyah and Chloe who really just tells him what he wants to hear, not the way things really are. She doesn't call him on his unrealistic crap, she flatters and flirts and he eats it all up. Of course he keeps going back for more only this time it's going to bite him in the backside.

She's turning into a proper stalker. She's tracking his phone and telling believable lies about him and like the boy that cried wolf, nobody believes him when he contradicts her lies. He's not drinking and he's not having an affair with Chloe. Not technically, anyway. He blames his father for believing her and spreading her lies and he's pretty angry about it. He was on the verge of leaving, from what it looked like, on the night Ken was injured. 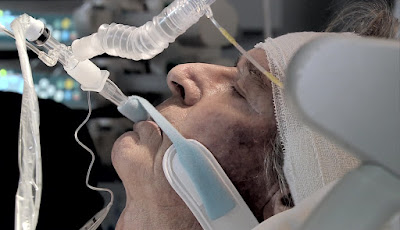 There were lots of people angry with Ken. Tracy overheard him being dismissive about his relationship with Deirdre and she's feeling like he prefers his blood relationships. I can see how it looks from her point of view but then, as Ken said, she has always been self absorbed. Adam certainly has a reason to hold a grudge. He didn't actually go to Canada even though Ken gave him money and ordered him away after he got beaten up by the drug dealer. Even Phelan got the short end of Ken's temper and he was about to go give him a piece of his mind. We saw Ken head up stairs to fill the kettle in the bathroom (the kitchen still being under construction). He heard someone at the back door but kept going. The next thing we know, he's been found at the bottom of the stairs with Phelan standing over him. The police think he struggled with someone and went down that way, either fell or was pushed. Who dunnit? that will be April's story.

There are a lot of theories out in the web world that have Peter being the father of Leanne's baby due to her taking Simon to see his dad around that same time. Is it possible? Maybe so. Steve never asked for a DNA test. Leanne *seems* to believe the baby is Steve's but what if she's saying that because if it's really Peter's, it causes even more trouble than if it was Steve's though I'm not quite sure how that would be considering the earth shattering implosion it did cause in McDonald Land. But while Nick is not happy about Steve being the dad and he has had his jealous moments, he knows Leanne and Steve have no romantic history. He's very intimidated by Leanne's past with Peter and always worries that there is unfinished business and a lingering love between them. If the baby turns out to be Peter's, Nick is going to lose his rag altogether but at this point, it doesn't seem likely.

Maria's out of prison already. That didn't take long. She's still got to wear that ankle monitor for a while longer. I wonder if they deported poor Pablo? Anyway, she's had nothing but time to seethe and simmer that grudge she's building against Aidan, the man that had feelings for her but wasn't going to break up with Eva because Maria would be in jail anyway, right? And he did have feelings for both women. Weak and spineless are the names of the game here and Maria seems ready to bubble over like a glass of warm champagne. It's not going to be pretty. 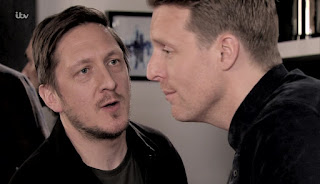 As much as I love the Platts, it's kind of nice that they've been scaled back a bit and let the Barlows take the front burner but there's still Bethany's dark storyline ongoing. Nathan and Mel continue to work on Bethany and manipulate her. She's so young even if she thinks she's all grown up. She won't even be 17 until June while that ratbag is 35 and as oily as they come. Sarah's in a tough position because if she forbids Bethany from seeing Nathan, she knows she'll only push her daughter right at him. Bethany is over 16 so I don't think the police can do anything about the relationship. You know, in one small way, I almost wish Callum was still on the scene and partnered with Sarah because he'd take Nathan down a dark alley and have his henchmen (and Gemma!) work him over.

There seems to be a connection between Nathan and Shona and I suspect in the long run, Shona will be the one that saves Bethany though it won't be soon enough. I think Nathan will be pimping her and manage that a few times before this is over yet. Creepy storyline, isn't it? The actor playing Nathan is spot on and cast very well. He's very believable. 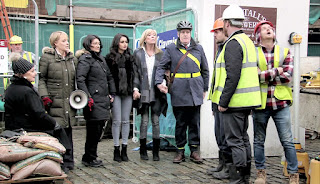 Sally went on campaign to defend her chick from the obnoxious wolf whistling builders and was successful. If only Rosie hadn't undermined her by giving a naive interview to the press who twisted it for all it was worth. The internet trolls came out from under the bridge and targeted Sally which isn't very fair but that's what they do. The ultimate prank was calling her, pretending to be the hospital and telling her that her cancer was back. Some people really are sick. And I don't mean that in the new,  trendy "good" meaning of the word.

And so it goes.