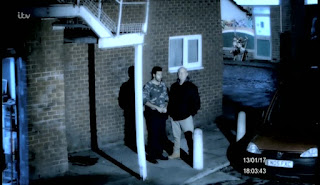 Phelan has now taken against Kevin Webster who mouthed off at Phelan on New Year's Eve after he broke in the house to help Anna who was on the ground after falling down the stairs. I'm not quite sure I even accepted that Phelan would do that considering there is no love lost between he and Anna. Perhaps he thought it would put Anna in his debt? Did he do it because of little Jack looking up at him to help? Possibly. Even he couldn't have a heart made up of so much concrete that he would take out his hatred for his enemies on a child.

But Kevin couldn't keep his enmity out of things so now Phelan has turned his animosity in his direction, using Andy as his puppet. He stole Kevin's breakdown truck and sold it off. He had Andy burn the garage because there was CCTV evidence of him admitting to Todd that he knew about the flat building scam on the laptop that he didn't manage to break. I did wonder why the seemingly top quality CCTV system wasn't storing the footage on a cloud server rather than a laptop that would then have to remain in the garage and turned on all the time for the downloads to be saved. It sure would use up a lot of space, too. 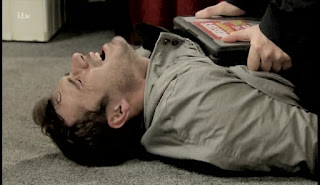 He discovered that Andy had the laptop on the day that Andy was planning to skip town with Steph and there was a fight. Andy of course, is not a fighter and wouldn't be able to put up much defense against the stronger, tougher Pat Phelan and a hard sided laptop. Phelan has crossed the line and killed Andy, scrubbing away the evidence. Will anyone ever find out? Likely but since he's now a murderer by his own hands, his days are numbered. I reckon we'll get a "Who Killed Phelan" story with someone like Gary or even Todd as the culprit, Eileen at a stretch if she finds out about his misdeeds before his death. And if that's the case, my guess is that Vinny will have returned and killed him in a confrontation because he'd be the expendable crew member. Speculation. It's all fun and games, isn't it?

Kevin is deep in debt now, because of Phelan torching the garage. The insurance seems to be able to decide not to pay even though the police have cleared Kevin on the suspicion of arson (due to Tyrone's lies to the police, because even Tyrone suspects Kevin thanks to Phelan). I wouldn't have thought insurance companies could do that but they do seem to be a law unto themselves. Sophie's medical bills added up on top of it all. Surely he could ask Sally to help out on that side, it's her daughter too? He didn't but she did offer and it took a little heat off his financial troubles.

It's probably added to his relationship troubles, though because he never told Anna whom he had persuaded to sue David for compensation even after knowing about Sally's cash. Pound signs flashing in his beady little eyes, and all that. I suppose the 7 grand from Sally only gives him a bit of breathing room but he's still weighed under. He will have to sell the new premesis but he won't get anything for them if they're burned out and he can't afford to do them up again. 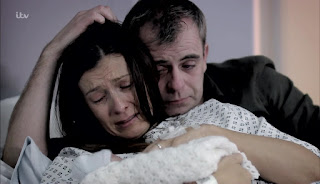 The tragedy of Steve and Michelle's loss of their baby was heart wrenching to watch. I don't normally rate either one as much of a dramatic actor. I have seen Simon Gregson do very well in the past but rarely has Kym Marsh impressed me as she did the week of Ruairi's death and in the aftermath. I think that because both of them have been through that situation in their own lives, they had something to draw on. It had to be very difficult for them, reliving all the pain they had probably managed to get through. You have to admire the bravery of both actors for agreeing to do it. 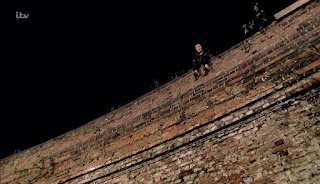 There was stoic Steve, trying to keep busy and keep himself distracted while Michelle's outer metaphorical skin was turned inside out, raw and bleeding. You never get over the death of a child and it doesn't matter if it was stillborn or if it does later on in life. Grief is subjective and everyone handles it differently, with nobody really handling it well but some manage a semblance of normality better than others. Steve is one of those and Michelle resented the hell out of him for it. She had nothing left to give him to help him in his grief so he had to reach out to his mother and his friends. Michelle didn't seem to want anyone's help, because she felt it wouldn't be of any comfort at all so she pushed everyone away including Steve. It was heartbreaking to watch and very real. 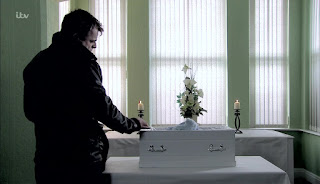 The death of a child is often the cause of the death of a marriage, even a good one, because grief is like nothing else you could experience. By the end of January, Steve and Michelle seem to be holding each other up and are off in Ireland for a break. I'm sure her mother will be just what Michelle needs.

But there is another bomb lurking in the shadows and that's Leanne's baby, also fathered by Steve. If the death of Michelle's baby has created cracks in the marriage, the revelation that Steve still has another baby will bust those plastered-over cracks, wide open, and shove Michelle right into Robert's waiting arms. You can see it coming, right? Until then, Nick is getting more and more unstable, possessive, suspicious, and all from an increasing sense of being unsure of where anything in his life stands. 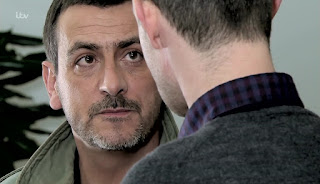 He sees Steve as a threat because he's the father of Leanne's baby. He sees Peter as a threat because he's Leanne's ex-husband and his rival. He doesn't like that Leanne and Peter have found a place where they can be friends and Peter's just as bad, rising to Nick's bait. Simon got hurt as a result, so maybe the two men will back off each other for awhile. Nick didn't know that he had nothing to fear from Peter, but he does now. He now knows about Peter and Toyah as does Leanne. Nick's such a (insert insulting name of your choice here). I've never liked him much as an adult character and still don't. I do like Ben Price's depiction.

It looked like Leanne and Toyah were about to make peace over Peter. I know that Leanne is over Peter but sometimes stuff happens to drag up all the old pain and feelings of betrayal and that's what happened. And she's right, it's also about loyalty. She was settled down until she found out that both Eva and Simon both know and didn't tell her. It looks like Leanne has lost both her sisters, now, at least for the time being.

Bethany and Nathan seems to be everywhere Bethany is, curb crawling in that car and flattering her, offering her a compliment and a sympathetic ear. He's Shona's ex, I think, and surely she's going to have some input into this situation at some point.It was also interesting that Gemma thought she recognized Shona from somewhere and Shona seemed very thoughtful looking at Kylie's photo in David's wallet. I wonder if there's a relation somewhere there, a blood one or an old friend.


Mary didn't go to South Africa after all but you know, she should have. She should have at least gone for a few weeks or a month to get to know her son and his family, meet her new grandchild, promising Norris and her friends that she'd return. She's not been seen at all since New Year's Eve when she decided not to leave so she might as well have gone! I know in this day and age of the internet, she can talk to Jude every day via a video app. I hope we do see her fly out when his baby is born (I think it was mentioned briefly that his wife was pregnant) but they'll probably drop the storyline. 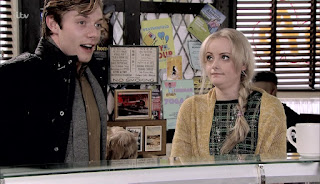 Looks very much like we've seen the end of Sinead and Chesney. It's too bad, really, they were very much suited to each other at the beginning but he's grown complacent and she's just grown away from him. She's a bright spark but should she be with someone like Daniel? He might encourage her but he's a bit quiet and shy himself. Maybe she's what he needs to bring himself out of his shell, I don't know. And as shy as he is, he certainly didn't seem to find it difficult charming her in his own way. Ken's son,  for sure.

He's a good character, is Daniel. I like how he can very much hold his own against Adam and Tracy's barbs. He seemed so happy to finally have a family around him and a support network, he didn't have to do it all on his own anymore but he knows he can if he has to. I think he's going to hang on to that family with all he's worth now he's got them. I wonder if we'll ever see his mother back. There is unfinished business there.