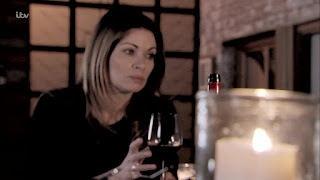 Carla's parentage has been revealed. She got pissed off with the world and she didn't handle the news very well. There was a really good scene when she went to the prison to see Rob. There's always been such great sibling chemistry between the two actors and each character always knows how to push the buttons of the other, even if neither of them will show that a point has been scored. I suppose that's the last we'll see of Rob because they won't be able to keep coming up with new reasons to show him in prison causing trouble for the 15 or so years he's been sentenced to serve. They can't get away with a release on a technicality because he confessed.

So now Aidan and Kate have a new half sister. Aidan is really angry with his father for betraying his mother and inadvertently causing her death (after a row she left the house, still angry, and got hit by a drunk driver. She wouldn't have been on the streets if they hadn't rowed). Kate's head is spinning but she doesn't have many memories of her mother and she's already coming around and forgiving her father. I think she's pleased to have a sister and she and Carla seem to be building a relationship, very slowly but it's coming. Aidan doesn't seem to be bothering on that score at all, too involved with his own war against his dad, I guess. Johnny? He's just treading water, hoping that Aidan will come round. I expect he will sooner than later.

But Carla's one night stand with Robert over New Year's is also having repercussions. We all know how Carla handles guilt. Badly. She tried to break it off with Nick but he talked her back because he doesn't know the real reason. He thinks she's just getting cold feet and if you'd had as many bad marriages and relationships as she's had, you probably would as well.

Secrets come out because they have to on a soap  and Tracy overheard Robert and Carla talking in a closed Bistro (after a power cut). Before she could go raging after Carla, burglars came raging in and she fled. That's another story, we'll get to that in a minute. What annoys me, but which is typical of Tracy, is that she's going to plot revenge on Carla but she seems to be giving Robert a pass. It takes two, and he should wear some of her anger, too, but she doesn't want to lose him. I suppose she could justify it to herself because they had been split up at that point so technically, he wasn't cheating on her. Carla was the only one cheating on a partner and that's nothing to do with Tracy. But Tracy needs to direct her hurt and anger somewhere and Carla's the one she's had it in for in the past, so why not go for the jugular?

She almost didn't have to worry, though, because of the accident following the break in, Carla was in pretty bad shape. She'll survive, of course. 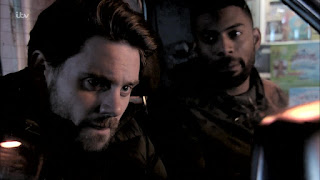 That burglary was the doing of Jamie and his mate whose name I've forgotten. Jamie, you remember, of the porn pictures he posted of Steph, his ex girlfriend when he was blackmailing Luke into the illegal racing in November and early December. Once Luke and Andy found out Jamie was bailed they went out ham-fisted and got Jamie sacked from his job. Jamie hadn't told the manager of the bar that he had a court case pending (or why) and his mate, who knew, vouched for him anyway. Both of them lost their jobs so Luke decided to take it out on Steph  because he thought she sent them to do her dirty work.

That just proves he never knew Steph at all because I figure she'd have gone to the bar herself and done her own dirty work if she wanted to upset things for Jamie. And because Jamie's a bully, he'd naturally prefer to go after a woman than two men. They broke into a restaurant that had been closed for hours due to a power cut so there was no cash to be taken and no Steph to be scared. Carla ended up the victim because they took her handbag in desperation and she wouldn't let it go. I think that bottle of wine she'd consumed clouded her better judgement. She ran after them and grabbed the bag before the car door could close and Jamie drove off while she was dragged along and then pushed out. Not very bright, are they?

They got caught thanks to something they said that Carla remembered and told the police. That sent them to Steph and Steph knew Jamie probably had a grudge against her for getting him arrested etc. They even confessed once all that came out and Carla's going to recover. We await Nick's discovery of her infidelity because that's going to come out, too. It always does. I did enjoy Steph giving Luke and Andy yet another dressing down. I do love Steph. 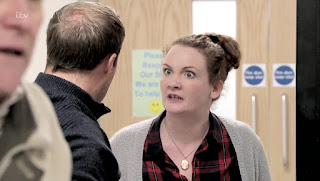 Tyrone and Fiz struggled through the month with Hope's chemotherapy and then another operation to remove the shrunken tumour. Her prognosis is looking very good but just as things might be looking up, Fiz has discovered the depth of the debt Tyrone has racked up and she's horrified, as you would be. Over £10,000 is a lot of money for a couple that don't have high paying jobs. Fiz will have to go back to work and Tyrone will have to make a comfortable bed in the doghouse for awhile. Hope was supposed to start school but didn't due to her illness. I don't know if she'll start late or if she'll be going to the same childminder that Ruby will be with until the next school year. 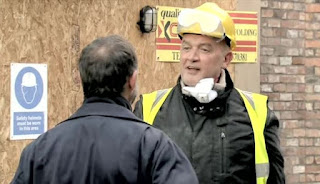 We have welcomed back the villain of last year, Pat Phelan who has lost everything in a divorce after losing everything to bankruptcy before that. He's working as a regular builder for someone else that has the contract for Kevin's new garage under the viaduct arches and he's just as smarmy and cocky as ever. He really does know how to insinuate himself and wasted no time doing it. He outed the gaffer for ripping off Kevin and he and Jason are going to team up to finish the job. I assume there must have been some way Kevin could get out of the contract he signed with the original guy. That seemed to be glossed over though it was mentioned.

The big thing is that Anna is freaking out. I mean, really freaking out. Phelan told Kevin some of the history but not the whole thing, nothing about his blackmailing Anna into bed to let Gary off the hook for assault and Owen off the hook for a big debt. Phelan really is a piece of work. Did you see him pretending to cower when Gary attacked him? "No, Gary! Not again!!!" then walked away with a smirk that made you want to smack it off his face. Come on,  as *if* he couldn't hold his own in a fight like that!  He's an excellent bad guy and the actor is superb! 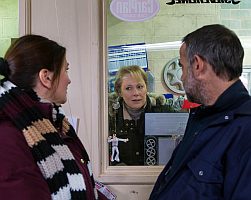 I think if Anna had told Kevin outright, Kevin probably could have understood after a think about it. But she is continuing to lie to him and he doesn't understand why she's so upset all the time. When it comes out, and it will, he'll be pretty pissed at her. I don't know whether they'll come out the other side as a couple or not and it's too bad because I think they suit each other. The other fun bit is Sally's reaction and continued contempt though really, it's nothing to do with her is it? I think she just likes the idea that all of her exes are pining for her!

To add a slice of comedy to our show, we have Sally dipping her oar into the political maelstorm. She's running for the local Council in the great tradition of Corrie councilors, (Len Fairclough, Alf Roberts, Deirdre Barlow, Audrey Roberts and Curly Watts!) She's already started sucking up to potential voters. I think Sally actually has the means to be a decent councilor. She certainly has the drive and ambition to push her views across and would stand up and defend her district. She might not be the brightest button in the box but she isn't stupid, either. She's very organized and has held down many a responsible job even if she does irritate the hell out of her managers! I really hope she wins. I'm going to enjoy the campaign, in any case. 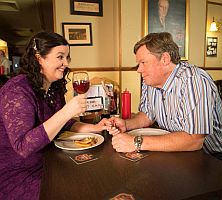 Brendan is still stringing Mary along. All of us viewers along with Rita and Norris have the measure of him. He's so clearly using her. I hate seeing single women get involved with married men but occasionally, as in the case with Eileen and Paul, you could see that there was real love on his part even if he was stuck in a difficult position with an ailing wife. It was, however, pretty rotten of him to have said wife right under Eileen's nose but never mind. Water under the bridge.

I'm only comparing the situation, because I don't believe for a minute that Brendan is passionately in love with Mary. If he was, he'd leave his wife. He's stringing her along and the end of the month proved it. His wife confronted Mary and he defended his wife, dismissing Mary cruelly as a rabid fan. It's too bad. It would have been nice to have found a man for Mary, someone as quirky as she is. He could have been just the right one but instead, she's been left humiliated and heartbroken, another woman who's been done wrong by a married man. 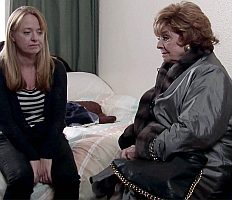 The month ended with the return of Jenny Bradley, fragile and shaky but back on her feet. She wants forgiveness and she wants to get her life back. I reckon it's going to be a very steep uphill battle and I doubt very much she's changed all that much. Leopards don't change their spots and Jenny has always had a manipulative streak. She might not be on the edge of a breakdown anymore, but she's still fully capable of causing mischief. Bring it on! If Anna and Kevin break up, she'll be in there like a dirty shirt but I don't know if Kevin would ever trust her around Jack again.