Here's how it should go down 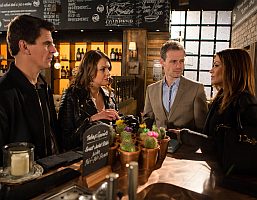 Tracy is holding Carla hostage and it just isn't right. Carla is nobody's bitch and there's no way the Carla we all know and love would put up with Tracy's blackmail. The funny thing is, I think if Nick had found out about Carla and Robert's one night stand, he'd have understood. He knew that Carla was in a bad way and he knows that she lashes out and gets self destructive when she's in a state. I don't think he'd have dumped her for the infidelity though he might have sacked Robert.

Now, it's gone on too long and Carla is manipulating Nick at Tracy's command. Tracy wants to be the Lady of the Manor, ruling the Bistro with an iron fist like she had hoped to do with the Rovers. That fell through and I sincerely believe that the powers that be will not allow Tracy to "win" and be the pseudo-owner of the Bistro. So, something has to happen to blow her out of the water. I think Nick will ignore Carla's nudging and will sell to Leanne in the end. He may accept Robert's bid in theory but for once, maybe real estate transactions won't be pushed through unrealistically fast as is the norm in Weatherfield.

I would like to see Carla get a grip. Barring that, I would like to see Nick overhear something or otherwise find out about Carla and Robert but not from Tracy. A miss-sent text from Michelle, perhaps? I want him to be the one to confront Tracy and Robert, or just Robert, tell him what his beloved has been up to. Have it out with Carla. I'd like to see him want to marry her anyway, give her a happy-ever-after but it probably won't go down that way. He'll probably finish with her, with a great puppy-dog sad face and she'll do what she always does and skip town.

If there's any justice, Robert will finish with Tracy once he finds out what she's been up to, and he and Leanne will get together. I think they're a much better fit.

How do you think this *should* play out? Do you think Robert and Tracy will end up owning the Bistro? How will Nick find out about Robert and Carla (because it's going to happen, it's soap law!)

I want to know why Tracy'luv is still a free woman after confessing to Robert that she started the fire in Carla's flat that wound up killing two people?
We know she's a serial killer (recall Charlie Stubbs) and I am gobsmacked that the writers have let her get away with killing 2 more innocent people.