A bit of a stretch 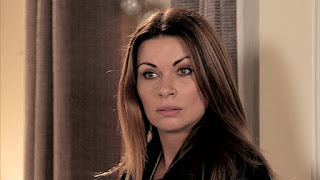 Carla's 40, nearly 41. Aidan, the older of the two Connor siblings must be about 30 and Kate is 26 I think, or thereabouts. She was 4 when their mother died 22 years ago, I seem to recall. Aidan wasn't much older, still a child so though I don't think it's been said, I'm going to put his age at 30 as stated. If he was 8 when he lost his mum, he'd definitely have memories of her.

Therefore, a solid 10 years between Carla and Aidan. We know that Johnny and Carla's mother had a one night stand, producing Carla 9 months later. Therefore, nearly 42 years ago, 20 years before Mrs. Connor (Lou) died and probably about 12 years before she had Aidan. We don't know how old Lou and Johnny were when they got married and there's been no comment that they waited a long time to have children, either by choice or by nature taking its time. It seems like Lou must have been into her thirties when she had her children unless there were miscarraiges before that, more information we don't know.

It's all conceivably fathomable (yes, I know, terrible pun) but it feels a bit patched in and contrived which is almost par for the course for Stuart Blackburn's reign on Corrie. It would have made a lot more sense to have Johnny unmarried at the time of the fling, perhaps being a good friend to Carla's dad (though, yes, we've also had that before with Lloyd and Mandy and her husband, Lloyd's good friend). Or perhaps he could have been a teenager, unmarried, part of a group of mates from the housing estate that included Carla's mother and her future husband, and living an 'on the edge' lifestyle of drugs and booze which he was able to kick, something Carla's mother never did.

It's bad enough that a long lost parent is one of the soap cliches and almost always feels less of a shocking surprise than a "Here we go again" storyline. At least they could use a bit more imagination. I'm not even going to bother discussing Aidan and Kate's predictable reactions and what will probably happen. You can all guess without too much trouble.