Let's talk about Sophie and Kate 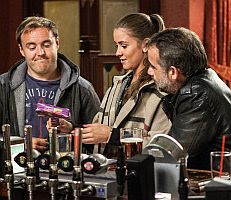 Sophie Webster is 21 and now owns a share of the garage. Let's forget for the moment, the complexities of who owns what of the business. Sophie has been lingering behind the counter of the corner shop for years now and many fans have continually bemoaned the fact that she's lost any ambition. She was a bright little spark in school and was in college when it all fell apart. The aftermath of the tram crash had it's effects on her life and she definitely seemed to be experiencing post-traumatic stress.

To remind you: Her mother had just recently recovered from breast cancer. The aftermath of the tram crash revealed that her father had an affair with Molly Dobbs and fathered a child with her, a child his best friend and business partner thought was his. When Sally found out, the marriage collapsed. The media tends to use the word "reeling" to the point of it being meaningless most of the time, but in this case, Sophie really was reeling in the aftermath and found it difficult to focus on school. Her girlfriend at the time, Sian, became impatient after awhile and Sophie soon left school altogether, to work in the corner shop.

Since then, she's been coasting. We fans have been frustrated that she never went back to school or done something more with her life like travel. I think she tends to be snappish, rude or "mardy" because she's probably not really that happy but now, as a part business owner, maybe this will be the making of Sophie Webster. I think it could be. She'll have those men whipped into shape in no time and have that garage running smoothly and efficiently. At the risk of sounding cliche, Go, girl! 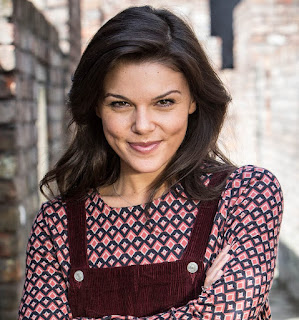 We don't know much about Kate Connor yet, but what I've seen of her so far, I like. She's cheeky, she's a bit spoiled and she's a Daddy's girl, She seems to have a lot on the ball,  a fairly good judge of character and quick to size someone up to find their strengths and weaknesses. She sure had Beth pegged when she had a bit of fun flirting with Kirk!   It strikes me that she and her father are very alike, which is probably why they are close. She and her brother have affection but also have that sibling rivalry, a little sister always taking digs at her big brother, knowing exactly how to wind him up. I think she'd defend him fiercely if the situation called for it.

I'm looking forward to meeting Caz, her fiancee and seeing how that relationship dynamic works. Since Sophie is gay as well, the chances are that the Powers That Be are going to throw a romantic triangle in there somehow. Caz is in the military and is away a lot so perhaps that's the sticking point in that couple and Kate will find herself lonely and looking for company. While it does sound like a typical soap cliche, I think there might be potential in a Sophie-Kate partnership.

What I don't like about soaps is that these things are often thrown together. If this is going to happen, I'd like it to develop slowly. Kate is a few years older than Sophie but not a lot, like Jenna was. I think the two of them could be really good friends and I would like to see it start there and not turn into a romance for awhile. A much longer while than soaps usually play things. I'll probably be disappointed in that wish.

But you know, putting them together just might work anyway. Maybe Kate can give Sophie her sense of humour back. They're young and Kate, at least, clearly knows how to have fun and Sophie has needed that for a very long time. I don't think Sophie and Maddie had that. They always seemed so serious and earnest. It felt like Sophie always took care of Maddie who was younger and vulnerable after a rough upbringing. They were a sweet couple but I think Sophie and Kate could be really good together, as grownups, on a more equal footing. Probably the first relationship of that type since Sophie was with her best mate, Sian.

Right, then. It's very early days and this new relationship may or may not come to pass but at this point, this is me coming out in support of it, if it happens. Sophie has been floundering and I think her time has come. I think I could learn to like Sophie a lot and I already like Kate.