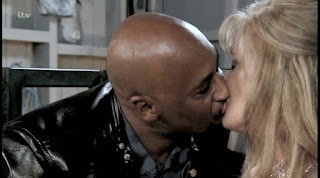 One of the staple storylines in a soap is the love triangle. Another is revenge. Sometimes one is a result of the other but not always. The most recent revenge storyline in Coronation Street was about love but also betrayal of a different kind.

Let's recap: Tony Stewart and Liz McDonald are a couple. For the first time in a long time, Liz seems to have picked a man that she was really passionate about. That's probably because Tony had a dangerous edge and Liz likes that in a man. She gets bored with the good guys after awhile. As much as I really liked she and Lloyd together, he wasn't exciting enough for her. Tony was.

Tony also had a good side. He's matured since he and Eileen split up years ago. He finally came back into his son Jason's life and wanted to have a real father-son relationship. He had bridges to build and slowly, he did it. He financed the builder's yard for Jason and he bailed out Steve when the tax man came knocking after Steve's illness caused him to overspend and ignore the pub's finances. 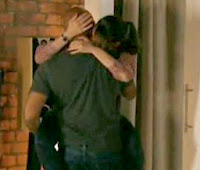 But like most men on Corrie, Tony was weak, too. He started to feel a bit taken for granted, a bit used and he was ripe for the picking when Tracy Barlow wanted comfort after her fiance was nicked for murder and jailed. There is no love lost between Tracy and Liz, long time adversaries due to Tracy's history with Steve so having a fling with Liz's fella just added to the enticement. But Tracy got greedy and started to infect Tony with her need to lord it over everyone. She wanted the Rovers and she knew how to get it, by using Tony as her man behind the scenes.

Tony pretended to be in financial straits which would be solved if Steve paid back the money Tony loaned him. But Steve couldn't afford to do that. Tony found a company that would buy Steve's share but would leave them to manage it. Tony owned that company of course. He bought half the pub and got his loan returned as well. Sweet. Now he had to convince Liz to sell her half and he nearly succeeded. 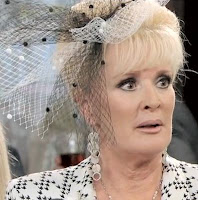 Michelle was heartbroken that they would lose the pub even if they got to stay and run it. Her BFF Carla offered to buy Liz's share and they stopped the sale at the last minute. The day after the offer was made, Steve and Michelle got married and went on honeymoon so they never found out what Liz discovered the day of the wedding, that Tracy and Tony had an affair and were behind the takeover of the pub. Tracy was so pissed off that they lost the chance of owning the pub at the last minute that she went straight to Liz and spilled the beans. Tony skipped town before Liz could confront him but he knew she knew because of the message she'd left him.

Carla never did actually sign the papers, it turns out, so Liz still owned her share of the pub but Tony owned the other half. Tony came slinking back a few months later, very sorry. Nobody was willing to forgive him, least of all Liz. Tony persisted. He was willing to do anything to win her back and make it up to Steve, too, in the name of keeping peace in the family. 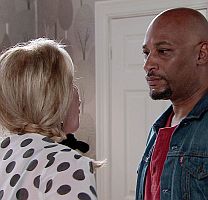 Little by little, Liz seemed to be coming around. She accepted that he regretted his lapse in reason with the affair but it was harder to get her head around the scheme to take the pub away from her and her family but Tony thought he had finally talked her around and so did everyone else. It was almost believable. There were no side looks over Tony's shoulder, no narrowing of the eyes or maniacal wringing of the hands or  twirling of the metaphorical moustaches involved. Bev Callard was far more subtle than that. Viewers thought they caught a glint in her eye now and then but couldn't be sure.

A number of viewers had predicted that she was luring Tony in for the fall, me included. That pub means everything to Liz and she would defend her family like a lioness. For me, the definitive moment was when she told her friends who were trying to make her see sense that she had to do what she had to do. I thought that if it was real, she'd have proclaimed something about following her heart, and a lot more passionately than she was doing. It almost felt like grim determination when she said what she said. I thought "A ha!!! here it comes!" 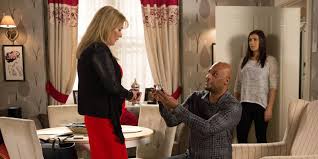 Sure enough, here it came. After she verified the contract that Tony signed, handing the pub back to her and Steve completely, Tony thought he had proven himself to the woman he loved.  She didn't expect Tony to then go down on one knee and propose but it probably made it all the better. She exposed him in front of everyone in the pub because that's what you do, isn't it! Publicly humiliate someone. And he deserved that at the very least after what he'd done to her.

Tony was shocked. He was confused. He looked around and saw surprise turn to glee on the faces of Liz's loved ones. They weren't in on the plot. Even Liz and Tracy Barlow seemed to be in agreement for once. Liz, a normally honest woman, took a page out of Tracy's book. She schemed and lied like a pro even though it was hard for her.

She persisted and she came out on top. Tony knew he was defeated. He didn't even get angry that he was duped out of the pub. He'd cleaned Tracy's business bank account out to get himself out of that partnership and that's pretty much all he was walking away with. And walk away he did, calling everyone pathetic on the way out. Not much of a dignified exit but it was all he could muster.

The champagne cork was popped. Liz and Michelle celebrated as did Steve who was in Spain with his brother. Liz didn't have regrets. If it had just been an affair... but it was more than that. She found it difficult lying but did what she had to do.

I did think her hints that Steve would only forgive him if Tony signed over his half of the pub were quite clunkingly HUGE, but really thought she was urging Tony to do it so they could continue their love fest. She really had me fooled. It was brilliant!