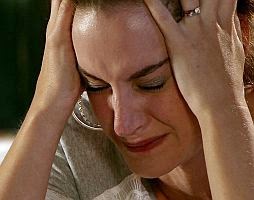 Kylie's really taking Max's condition personally. It's dragged up all her old insecurities and she took one of Max's pills to calm down and is fighting the urge to down the whole strip. I don't actually think they would have the same effect on an adult without the same condition, however, so that might be a bit of a slip on the writers' part. I could be wrong, though. I haven't checked it out. But because of that nagging doubt, the storyline doesn't work for me. It would have been more likely that she ran into an old friend who, realizing Kylie was stressed, passed on a couple of pills "just in case" but the writers don't listen to me.

Having said that, it's still interesting enough if I just suspend that bit of disbelief. Kylie has come a long way and grown up a lot but she had an awful lot of history to overcome and it's not easy. I can see how all this knocked her back and I can understand how easy it might be for her to return to old ways though she's been really trying hard to find purchase on that slippery slope. David wasn't very supportive when he found out and that might be the nudge she doesn't really need.

Peter was at death's door. Again. Deirdre really took it hard, Ken is worried sick and even Tracy shows concern. She does love her mother, father and brother even if she doesn't show it much. But weddings can't be forgotten either and since she can't help Peter, priorities must be set. And poor Carla, she can't get away from it. Rob wants her to forget Peter and cut ties and he really hoped Peter didn't make it. Peter's confession to Carla that he is taking the blame for Tina's death to save her from it made her realize that he didn't do it. Peter survived as we knew he would and his return kicked off a war between Jim and Peter. 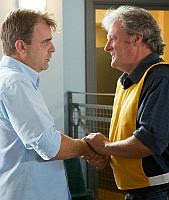 Steve seemed quite pleased to make up with his dad, in spite of Liz's misgivings. Guaranteed that it wasn't going to last and Steve would get kicked in the proverbial gut by his father's actions again. Didn't take long. Once Peter spitefully told Tracy that Jim was the one that supplied the booze he drank, she went straight to Steve as he knew she would and that turned Steve back against his father and he grassed him up to the authorities for good measure. A nice quiet little enterprise has been squashed, Jim blames Peter and so do all the other prisoners that were bellying up to the makeshift bar. Peter and everyone else might have blamed Jim for roughing him up. He might not have given the order but he certainly didn't discourage it either. He was more concerned with visits from Liz and Steve.

Now Jim has lost his son again and that's another reason to be pissed at Peter. If you thought things were ugly before, they're about to get worse. This isn't an easy ride up to his trial and we still have the roller coaster of that to anticipate. Tracy and Rob's wedding is looming, if indeed it happens. Rob's days are numbered, we know that, we just don't know when and how it's all going to blow up in his face. I first thought Ken would be the instigator of Rob's downfall but now I think it's going to be Carla. That would be more dramatic, Carla having to turn in her beloved brother, don't you think?

There might even be a few people out there that will have some small modicum of sympathy for Tracy. I won't be one of them. I thoroughly enjoyed Becky ruining her marriage to Steve, formerly the love of her life and I shall enjoy even more seeing her face when she finds out about Rob and her life as she sees it ruined. It is too bad in a way, though I detest Tracy as most of us do, she and Rob really were well suited. They "get" each other and accept each other, warts and all, though Tracy's attitude and nasty mouth still upset Rob now and then. I expect it will all come apart in October.

Tyrone is recovering slowly. I don't really understand why Tyrone is feeling the loss of the salary. He's either part or full owner of the business, I forget what Kevin had done in the end, but either way he can draw on a share of the profits, can't he? Working or not? Kevin's back and he's putting Tyrone to work in the office until he's able to dive into an engine. Meanwhile Fiz and Tyrone fell out with yet another long time friend and the only thing to make them see reason was the reason of the women, Eva and Eileen. They get to keep the five grand and get the work redone and everyone's friendly again. 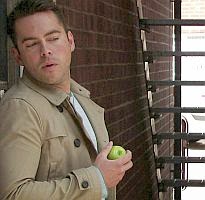 Todd didn't get sacked at first because Jason and Tony didn't want to raise anyone's suspicions but once the truth came out, all bets were off. Todd is jobless and that silver tongue doesn't seem to have brought him any luck finding something else. Nobody wants to be friends with Todd and he's desperate to make someone, anyone like him again. He has even turned his mother off, for the time being though she won't be hard against him for too long. Mothers like Eileen can't turn it off that easily. Todd really only seems upset when he's caught out and can't worm out of it. If he can, then he's cocky and glib all over again. He strikes me very much like the boy who cried wolf. He's all about attention. Once he gets back in the good books, I have no doubt he'll be back to his nasty tricks again. He's not very likeable but he's fun to watch.

Kevin finally got back again after all of the excitement had cleared up while Luke heroically has been keeping his and Tyrone's business afloat single handed. I hope he gets a decent bonus out of this. I really hope he's not going to go all puppy dog and follow Sally around with a wistful look all the time. He needs to get on with his life. He says he knows that but will he? I know on soaps they keep putting popular couples back together again over and over but there comes a time when it's just not realistic and it's boring. Sally has a new fella that suits her really well. If they put her back with Kevin it will be the same old same old.

Maddy is coming along nicely isn't she? She's cleaned up, got two jobs, and getting on with Sophie's parents. She's even got Simon as a fan which helps her get over missing her little brother so much. I think Sophie and Maddie need to find some friends. I know they're friendly with some of the other young women but they never seem to hang out with anyone. Why shouldn't they go out on the razz with Steph and Katy? Whatever happened to Sophie and Chesney's friendship? That's been forgotten. They could take Faye under their wing. Anyway. I like Maddy and now that she's not so defensive, she seems to suit Sophie a bit better but they still don't seem to have a lot of chemistry. Sophie and Sian had it, but nobody they've put with Sophie since then has really worked with her as a couple. Amy Kelly's good, though. Really good. 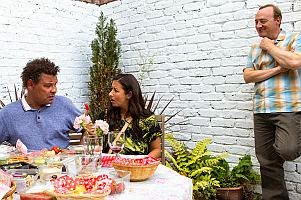 Enjoying the wedding wars between Beth who's trying to keep up with Tracy. I can't imagine how Tracy's managing to pay for this elaborate wedding she's planning. The shop can't be doing *that* well and Rob can't have *that* much money in the bank. I would imagine Beth and Kirk will realize they have even less money before long and we'll see them have a cheap but very cheerful and quirky wedding of their own and I bet it will be happier and longer lived than Tracy and Rob's! And as much as I thought the actor playing Neil did a brilliant job, I'm glad this is over. Don't let the door hit you on the ass on the way out!

Dev and Julie are starting to see each other in a new light, one that Mary would most definitely like to hide under a bushel. It's a hoot watching and listening to her trying to undermine the inevitable! It will be a bit heartbreaking though, to see her face in disappointment. I hope Dev handles her gently. Perhaps Julie will be the one that smoothes over the hurt and keeps Mary included in their lives. If Julie keeps on working, they'll still need Mary after all.

October will be the month to see Peter's trial and probably Tracy and Rob's wedding, likely just after that. It'll be interesting to see how that all comes out. Rob's days must be numbered one way or another.
Posted by Tvor at 20:39

Tvor as always an awesome write-up. Unlike you however, I hated the Tyrone/Fizz/Jason storyline. I thought Tyrone and Fizz(in particular) were being very demanding and unfair to Jason. At the end of the day Tyrone was told not to go up in the loft. In my humble opinion I do not like the pairing of Fizz and Tyrone I used to be quite fond of Fizz but lately I find her character tiresome. Tyrone was supposed to have been unable to work at the garage but he had no problem eating in Roy's on a daily basis as well as sitting in the Rovers! They must have a full time babysitter on tap.

While it's true that Tyrone was told not to go into the loft, even when it was finished, the floor was still unsafe and it still could have happened later once there was heavy furniture up there and kids jumping around and playing or Fiz or Tyrone up there. I think the little ones go to a child minder every day.