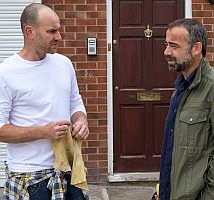 Kevin Webster will be back on our screens very soon as the actor returns to the fold. I really hope Stuart Blackburn doesn't put him and Sally back together again. Sally and Tim really do work as a couple. It doesn't look like it will happen from what I've heard but he's been known to change things up in the past so we don't really know. What I also don't want to have happen is Kevin mooning and looking all sad watching Sally and Tim all the time. Get on with your life, Kev. It's too bad that there seems to be signs that Dev and Julie might get together because I had thought in the past that Julie might be a good match for Kevin. Her bubbly enthusiasm could cheer his miserable face up!

Luke will be happy to have help in the garage again, too. What a mess Kevin is coming back to. Speaking of which, if Tyrone is at least part owner of the garage, isn't he eligible for some of the profits whether he's working or not? I realize the salaries come out of the income and Tyrone's would probably be coming out of his share of the profits rather than as a regular business expense but it still seems like he should be able to draw on the profits as owner. Still, what do I know?

I'm really hating Lloyd and Andrea's story. Really. While it was momentarily interesting to see Neil's obsessive and single minded focus on ignoring all the insults and insisting on doing everything he can to lure Andrea back, it's getting old. Like old fish. I realize the poor man is probably having a bit of a breakdown and to be fair, he never saw this coming so it had to be a shock and hard to get his head around. But still. It's pretty much the only storyline at the moment that I could cheerfully fast forward if it weren't for having to write updates and blog stuff. 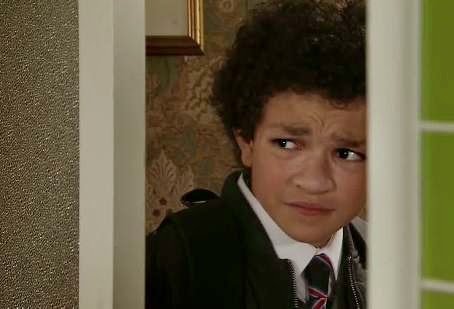 Putting Maddie and Sophie together seems to have shoved them into the Corrie storyline cupboard. After a bit of initial angst and trouble, it's all happy families, and even Sally has settled down. I do like the chemistry between Maddie and Tim. There's a spark of kindred spirit there, don't you think?  I hope they keep that going. Maddie latching on to Simon as a substitute for her beloved brother makes sense, too but is it really good for Simon to get too attached to another babysitter type figure? I complain that the writers seem to portray Simon, who's about 12, as a 6 year old crayoning homemade cards and acting quite childish much of the time but you also have to remember what that kid has been through in his short life and it's a wonder he's not wibbling in a corner somewhere. I fear for his puberty, I really do. If anyone is set to be a hell raiser, he is.

And speaking of which, Amy sure has picked up on her mother's personality. I suppose that was inevitable, really. The child gets attention from her grandparents but her dad is busy with two businesses and her mother only pays her attention when it suits her. Life at the moment is consumed with worry about Peter, and Tracy and Rob's wedding and Simon gets more sympathy than she does. What's a little girl to do? 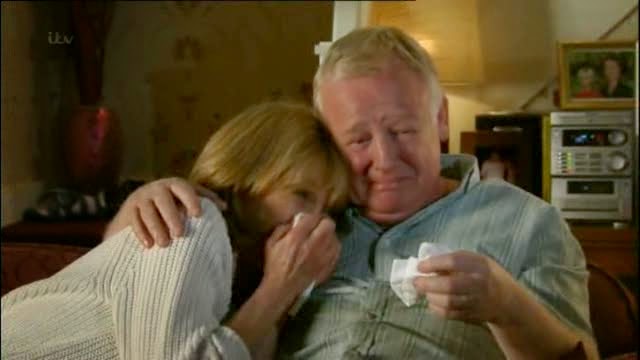 Really loving Gail and Michael. I hate to say it out loud, but could she finally have found a fella that won't end up in a coffin at the end of the relationship? Will this one stick around? I really would like to see her with someone nice, someone that will treat her well and make her happy. It looks like this might be what's happening at the moment. (knock on wood) There hasn't been anyone that's been this genuine in her life since the early days of Martin Platt. Even at the beginning, Brian was too into himself, Richard was too smooth and insincere and Joe was too volatile. All of them were disasters for Gail in the end. Maybe Michael will be too but I like to think he's got a better than average chance of going the distance, providing the actor wants to stay. 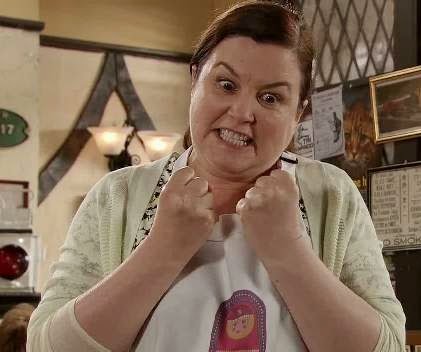 Mary is showing definite signs of jealousy now that Dev may be interested in Julie. I don't really think that Mary has a crush on Dev per se. We haven't really seen her crave Dev's company like she did Roy's when she was crushing on him.

I think it's got more to do with the children. She has taken over the mother figure and sees matronly Julie as a real threat to that role. If Julie and Dev get together, Mary won't be needed for the kids and will have no part in the Alahan life at all. You kind of feel sorry for her in that respect. She ends up alone, sometimes due to her own foibles,  but she does seem to get a bit too focussed.

I like Scary Mary to a point as long as she doesn't  get dangerously vindictive like she kind of did with Hayley after Hayley pushed her back from the wedding planning and like she did when she kind of trapped Norris in the cottage. She's a wonderfully quirky character and the actress that plays her is superb. She really does embed Mary with a great combination of weird, quirky, geekiness, off the wall and yet sympathetic at times too.

Love Eva and Jason together. Don't know how this thing with Todd is going to work out with Fiz, Tyrone and Jason and Tony but I like how Eva always defends her fella. The actress is pregnant so I really hope they write that into the character because I'd love to see Jason become a dad. As good as the actor playing Tony is, I don't see the character lasting because he's really the instigator in causing Jason so much trouble here. I really think he might take things too far in trying to fix the situation and Jason will demand he leave town. He's also known to get involved in dealing with stolen goods so I reckon he's going to end up in jail at the end of it. Maybe he can take Tracy with him!

I'm sure at the end of it all, Jason and Tyrone will be friends again but who knows? Fiz and Tyrone seem to be making a habit of alienating old friends, digging their heels in and being unforgiving. I know the accident was awful but it wasn't Jason's fault. The actress that plays Fiz is also pregnant so she's going to drop off our screens at some point too, though it's hard to say whether they'll write her out for a time or just not show her on screen.

And the actress that plays Kylie is also pregnant, a real baby boom there! We can see the start of her going off the rails, unable to cope and feeling extremely guilty about Max's condition. It's a good storyine for me. I am interested in how it unfolds. It's also interesting to see how mature David has finally become. I love David and Kylie as a couple and even though she's settled down from the wild child she was, so has he and it looked like they would have grown up together. They may yet go the distance if they can weather this upcoming storm. I hope so.

I'm tickled pink that Kirk and Beth are going to get married. Wonderful couple! I actually think Rob and Tracy are a suitable couple too. They get each other and seem to know what they're getting into. Or they did. Tracy's not going to be best pleased when she discovers what Rob did. It'll do my heart good to see her get her comeuppance. Becky's revenge on her, causing her to lose Steve is going to be nothing compared to this. After all the hurt she's caused others, people aren't going to have much sympathy for her. Or are they?

Anyway, that's a lot of musing for one blog post. I'll just get me coat.

Brilliantly written as usual! Just yesterday I got this blog as an app for my mobile and complained that I couldn't see the comments, and today I can. Thanks Corrie Blog!! Kim from Can.

Thanks! And you should be able to see the comments on the Coronation Street blog though this one that the post is on likely won't be comment-visible on the app