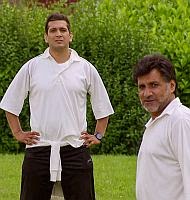 Apparently, the Nazir family is set to move into the Street. The only question is where because none of the houses are empty and there's only a couple of tiny flats which, like all the other tiny flats, seem to have room for at least two bedrooms. You can tell from the size of the various buildings they're in that there's no way you can fit a two bedroom flat, with living area and bathroom into the space allocated. Elastic walls again. And some of the buildings, like the Kabin and the Salon/Taxi office have TWO two-bedroom flats! Madness!

Where will the Nazirs go? There's one house that has had a very frequent turnover ever since it was built, mainly it's been a scene of murder and other disasters and I reckon the current owners and inhabitants, Anna, Owen, Gary and Faye, will vacate when the bills mount up and the bank wants the house back. We haven't heard a lot about Owen's debt lately. He did declare bankruptcy but I don't think that related to the mortgage on the house though the bailiffs did come and remove some items but it was related to his business, I think. 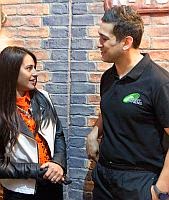 I imagine that they're going to lose the house and they'll be the ones crammed into one of the tiny flats that are available, probably the one over the corner shop, and Sharif and Yasmeen will give up whatever very nice house they currently own, unrealistically, and buy it and move the whole clan in. The only other place that might be likely is a posh flat in Victoria Court seeing as only Nick seems to live there. (Is that where Carla is buying her flat?)

I think there's meant to be three bedrooms upstairs, again, somewhat unrealistically, but that's enough at least for the married couple and each of the two grandchildren. Kal can bunk in with Leanne or with his son and we're sorted.

And I still think Mary needs to rent a flat. I'm surprised Dev has never suggested the shop flat for her at a reduced rent considering her being his nanny and all. I believe the flat over the butcher shop (soon to be community centre) is vacant, as well.
Posted by Tvor at 08:58