This month's State of the Street is late because I was away on holiday last week. 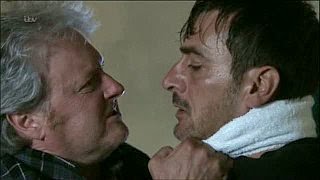 Ken's back! Forget saving the library, he's got a son to save. Again. A son that seems hell bent on self destruction. I think if he hadn't got that first lot of drink that he got from Jim, he might have been ok but it was obviously real rotgut, quite literally in this case, and very damaging. Jim just wants his family back and is using Peter to do it but Peter wasn't 100% successful. I'm surprised in one way that Jim agreed to supply booze for so obviously a raging alcoholic. He doesn't seem to be getting paid for it, at least not by Peter, not in cash. He must not be getting it for free himself. 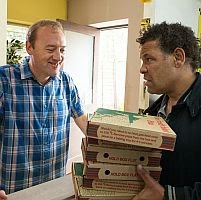 I do like seeing Jim back, though. There's such chemistry between he and Bev Callard and Simon Gregson. Still, I don't think there's a place for the character anymore as a regular so I wouldn't want to see him back again permanently. It would mainly be him lusting after Elizabeth who would bravely try to master her old feelings and fail and then the destructive circle would start up all over again.


Lloyd took Andrea back, idiot that he is. Neil is still following Andrea around like a pathetic kicked puppy. He's an idiot too. All of them are, to tell you the truth. The main thrust of this is the departure of Jenna to do good works in far flung places. Another good character wasted while Neil stalks Andrea. It's going to end in some sort of crisis. Either he's going to kidnap her or threaten to kill himself, something like that. The actor's doing a great job, mind you but it doesn't really turn this storyline into anything remotely palatable. 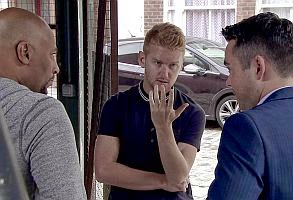 Todd has turned into a dweeb. If he thinks he looks like a dynamic business man with his geeky clothes and slicked back hair, I've got news for him. He looks ludicrous. He's nothing more than an office assistant but Tony's flattering him and he really does know what Todd's ego wants. He's not changed any, though, he's just as manipulative and sneaky as he was playing Marcus around. Only this time it nearly had fatal consequences. He knows nothing about building. Tony wanted him to get the supplies on the cheap. He didn't say get substandard stuff, just find them cheaper but Todd knows nothing and got the wrong grade board.

Gary told him, Tony told him. He lied to Tony and threatened Gary. If I was Gary, I'd take the sack rather than install something unsafe, especially when he knew there were children in the house as well. That didn't really ring true to me. Looks like everyone seems to be getting over Michael's dodgey past and are on the road to accepting him. And why not? He was always a good man, just lost his way once and regretted it immediately. It was unusual seeing Nick go off the rails and be Mr. Unreasonable rather than David but he was taking his anger at Leanne out on everyone else until she finally forced him to admit it. Faking an illness to get her to back down? Nasty. I like the character in that I like to dislike him. I used to think I liked Leanne with Kal but I don't anymore. He's a rebound just like Nick was a rebound for her off Peter.

I like the new family mostly. Sharif has gone a bit dull but I like the mother and Alya though it's tedious to find Gary popping up every single time Alya is on the screen and vice versa. It's nearly a drinking game now. The younger son, Zeedan, will be on screen in September and we'll see then how they all fit together. I'd like to see more of the mother, Yasmeen, she's a force to be reckoned with!

I really can't understand why Michelle would agree to plan Rob and Tracy's wedding. That is probably the biggest thing this month that doesn't ring true. Michelle might like Rob as an old friend but she detests Tracy and Tracy detests her. It makes no sense. Maybe they just can't think of anything else to do with Michelle? I am, however, delighted that Kirk and Beth are getting married. I can't wait to see what that wedding will be like! 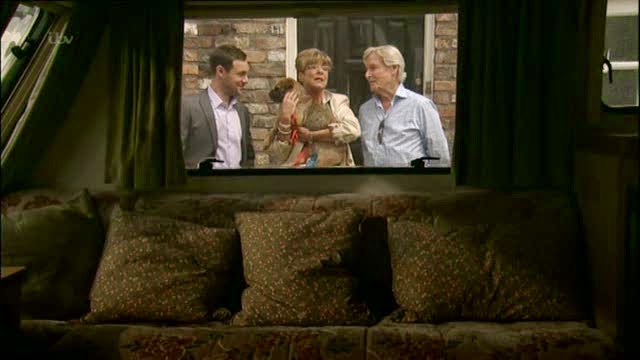 Ken finally returned, as I said earlier, and after making peace with Deirdre and figuring out everything he's missed, he decides he's always been a poet at heart and an outdoorsmen (which he never,ever was) and takes Deirdre camping in a caravan. While it was quite funny seeing Deirdre stomping about the fields in a skirt, top and one of her belts, fag in hand, again, didn't ring true. Why not find a nice country B&B and go hiking from there? Couldn't have been any difference in price than renting the caravan and paying all that extra for the petrol to haul it around.
Posted by Tvor at 12:08

I'm surprised in one way that Jim agreed to supply booze for so obviously a raging alcoholic. He doesn't seem to be getting paid for it, at least not by Peter, not in cash. He must not be getting it for free himself.

It looks to me like he's making it, perhaps with pilfered fruit juice and yeast (you don't even need the yeast if you're patient enough). My partner is a retired prison guard, if you're wondering how I know this. ;) Guys like Jim don't get paid in cash. They get paid in favours: cigarettes, biscuits, candy, and so on, not to mention the influence they can have on things. It also helps Jim since no one will mess with him.

All very true. I did wonder about the booze mainly because Jim was cagey saying he couldn't always get it or something like that so it sounded as if someone else was supplying it. The look of it did look like something homemade and no wonder it damaged Peter so badly! Yes, I didn't think of the favours etc but that's more likely.