There's something about Neil 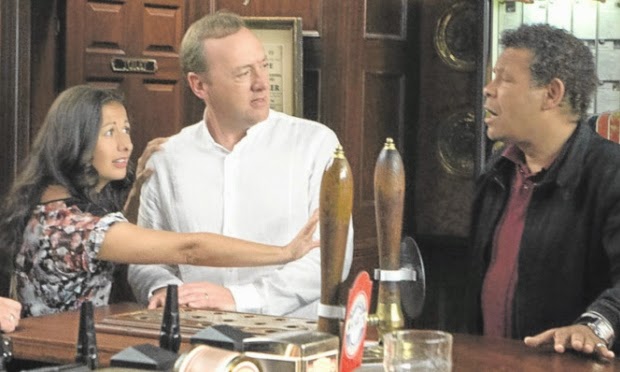 There has been a lot of contention about Lloyd and Andrea's storyline from the fans. People are really getting tired of this storyline and of Andea who was  breath of fresh air at the start. I sort of agree to a point. The storyline certainly became a bit tedious once Andrea's cliche secret was dragged out of the soap closet.

Neil, the long suffering husband, didn't think anything was wrong but to be fair, he worked away from home a lot, providing for his family. By her own admission, Andrea married young and in haste and once she had her daughter, felt trapped, unable to break up the family for no real good reason. Neil was never a bad man. He held down a good job, loved his family, treated them all well and maybe he wasn't very exciting but he was dependable. But he was gone a lot. I think Andrea became lonely and maybe resented shouldering all the responsibility of being a single parent when she really wasn't.

We see Neil as a wet blanket, a real drippy guy who's boring and kind of plodding through life, oblivious to his wife's unrest. People seem to be finding his near-stalking of Andrea and Lloyd tedious. Let's be fair, his world has fallen apart. He most definitely was taking his life and his wife for granted but he never expected this, didn't see it coming (which he might have if he'd not worked away most of the time). He thinks if he changes, if he gets a job at home, if he reminds her of the good times, maybe she'll realize he wasn't so bad. But he can't love her enough for both of them and she's long since fallen out of love with him. 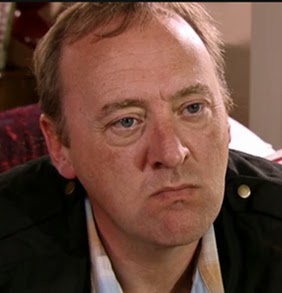 Watching the show this week, I'm starting to find Neil a bit sinister. We've seen him take a load of abuse, from Lloyd and Andrea, shouting, cajoling, insulting, nothing seems to be getting through to him to convince him that his marriage is over. He's single minded and obsessed. He lets any and all insults roll off him like they weren't even uttered. Once in awhile, one of Andrea's blunt statements on how she feels seems to hit a sore spot but he immediately pushes it away and continues his determined quest to get her back. It's starting to be a bit scary.

I think he will increase the pressure more and more but stay just this side of legal. They won't be able to peg him for harassement or stalking because he's not threatening. Yet. I won't be at all surprised if he eventually kidnaps her and keeps her somewhere.

It kind of puts me in mind of John Stape stashing Rosie in the attic, justifying it because he blamed Rosie for throwing his life into chaos, mainly because he wouldn't accept his own responsibility for his actions. He was single minded and obsessed, too and he's got that glint in his eye. I can't fault the casting. William Travis is doing a very convincing job. I don't like Neil, I don't even really feel sorry for him but I do think the actor is making Neil believable, as far as you can with a soap.

Neil's motivations are different but his attitude seems to be sliding into that same sort of madness that came over Stape, the conviction that he was right and he can find a way to "make" Andrea love him again. He may even become suicidal with the view to killing her so nobody else can have her, or at least might threaten it. I don't know if he'd go that far but she may not realize it.

Everything will turn out ok, in the end, I should think but I really do see this escalating into something perhaps a bit more dangerous. What do you think?