Flavour of the Month

There's news over the weekend that Kym Marsh has signed on to Corrie for another year. No big deal, you would think, but the unnamed anonymous "inside" source spoke to the media saying that Michelle, Kym's character, is the very center of Coronation Street and everyone is pleased she's staying on. Um. I would beg to differ there but the thing is, sources like that are usually an agent or publicity spin doctor paid by the actor, at least, that's what I think. For nearly the entire time that Ms. Marsh has been on Coronation Street, we've seen her face plastered in the newspapers, photo shoots, on every red carpet and carpets of all colours. She's very good at getting her name and face out there.

Then you remember that Michelle has been the focus of a great many storylines in the past. For a year or two there, it really did feel like Michelle was the center of the show but it wasn't in a good way. It was overkill and Corrie seems to be doing a lot of that lately. They really over-use a character to the point where most of the fans are truly sick of them and it turns them off the character.

I never had a problem with Michelle at first, she wasn't an actor that would win major acting awards but she wasn't that bad either. But then it started. She was everywhere though not shoved into everyone else's storyline as well, like they did with Stella Price, at least. It culminated in the very ill-conceived (and yes, pun very much intended) storyline about her biological son being switched in the hospital with another. The Ryan/Alex storyline was awful and although it's been completely swept under the rug by the writers, fans remember and wonder why Michelle never contacts her biological son on his birthday and why a stroppy Ryan never screamed "You're not my real mother" back when he and she were feuding.

After that, Michelle took a back seat for awhile and it was All Becky All the Time. Again, overusing the character but for me, in this case, I liked Becky and Katherine Kelly a lot more so it didn't bother me. It was a bone of contention for a lot of fans, however, and Ms. Kelly's face wasn't plastered over the media nearly as much as Ms. Marsh's. This isn't a new phenomenon though. 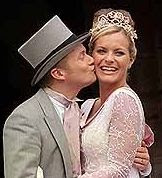 If you think back to the 1990s, you may recall an actress called Tracy Shaw who played Maxine Heavy Peacock. She was the first media darling that I remember and she was all over the tabloids. There were rumours that she herself was the "anonymous" source for some of the stuff that got into the papers.

Another point that seems to crop up with these women is that, as an actor, their skills are not that strong. Some were/are better than others but most of them, when they decide to leave the show to persue other projects, don't really get very far. It's a testement to their ability, not their popularity, that they make a successful career outside Coronation Street, like Katherine Kelly, Sarah Lancashire (Raquel) and another former favourite of mine, Suranne Jones. The rest spend some time working the media then fade quietly away.

At the moment, Helen Flanagan, who played Rosie Webster, seems to be her own publicity machine and making sure her name, face and body are a staple of the salivating tabloids and social media. She wanted to be famous. She is, but it's for her face and figure, not for all those acting jobs that haven't really appeared yet. She, too, will eventually fade as the flavour of the month turns to a new face.

Some of the women realize their limits and stay with Coronation Street as long as they can. The security is good, whether or not they like to keep their name in the spotlights. Most of them, in fact, keep their private lives private though disappointingly, even the ones that seem the most sincere still end up selling their stories or their wedding/baby pics to one of the glossier magazines. It's that last bit that kind of makes me feel let down. Sometimes, they do have a message to tell, like when Sally Dynevor went through her cancer treatements. Seeing her story in Hello magazine got her message of hope and survival out to a lot of people and that is a good thing. Selling your wedding photos offsets the cost of your big day and that just feels cheap.

I guess I've got off track a bit I hate pandering to the media and the ones that do it the most deserve it the least. I certainly think a lot less of the actors that do it and when the Powers that Be shove a character down our throats in storyline after storyline, especially silly storylines that make no sense, only serve to make us sick of them, not love them more and it's moreso when it's an actor that isn't up to the workload nine times out of ten.
Posted by Tvor at 08:16

Another character sadly is Sophie Webster played by Brooke Vincent. She is not a good actress and has appalling diction and just annoys the hell outta everyone. Again I have nothing personal against this girl but I groan whenever she comes onto the screen and she could be played exceptionally better. Despite this she seems to be the darling of the production team and is another one that gets her contract renewed over and over again as a 'popular' character.

PS I dont mind proving I am not a robot but these words could at least be readable please! I have attempted about 15 times to post this!!!

Sorry about the captcha words, I don't have any control over that. Thanks for persisting! I agree about Sophie but at least the actress doesn't get herself plastered all over the newspapers and media as well.

Good post, Tvor. I wonder if this kind of off-screen publicity seeking affects how the show runners perceive the actors, if at all. If it puts us off so much one would think they might get stuck with rather boring storylines, or just appear along with others', like Stella. Although I don't recall her doing the glamour bit, like the actress who plays Michelle.

I's sure any publicity is "good", but glamour shots, without the balance of real talent, are so tacky. Take Julie Hesmondhalgh, quite a good-looking woman when not in Hayley mode. No need for the extra publicity for her. I guess I'm saying I don't feel judgemental, just that these young women are losing out themselves, on a fuller career. I'm sure someone is writing a thesis on it somewhere.

@David Parsnips (great name) - I've taken to clicking on the reload icon next to the Captcha box until numerals come up. Most of those are much more legible than letters.

I have been wondering why the writers constantly turn the actresses into shrews. Michelle was OK or average when she first came to CS but she is now totally horrible. So why do the writers do this. I don't know much about contracts but I think I would be in the office fighting for my acting career if they turned me into a horrible bitchy woman. Now a person could say it takes a good actor to carry these roles off and they could be right. The one thing I do know is that if I dislike a character in an ongoing role, my feeling of dislike does not disappear. It stays with me and the actor could win an Oscar and I would not be impressed. Look at what they have done with Tina. She is being portrayed as an immoral, uncaring misery and she has not been this type of character from the beginning but suddenly she is?? I know, I know it is all about a storyline but the sudden change in a characters personality just doesn't work for me and I wonder how many other people feel the same way. As far as Helen Flanagan is concerned I am sure there are a few young men who thinks she is gorgeous. I have never liked her looks, the fat lips etc. and this is an actress who is totally incapable of acting her way out of a paper bag. I think, as you say, she will fade away. And then there is Leanne - enough said.

Katherine Kelly/Becky might have been shoehorned into a lot of stories, but that lady has more talent in her little finger than Helen Flanagan ever dreamt of possessing, so at least she was always watchable.

I think Tina is being portrayed as a naive stupid girl who's fallen for a smooth slick experienced liar. Defrost, i agree, Katherine Kelly is very talented and always was.