It was a cold day in Weatherfield

As you may or may not know, I contributed to the Coronation Street Blog along with  a number of other people. Today, thanks to the lovely Flaming Nora, editor of the CSB, some of us bloggers were very lucky to be part of a group visit to the ITV studios in Manchester. There are loads more of my photos here. 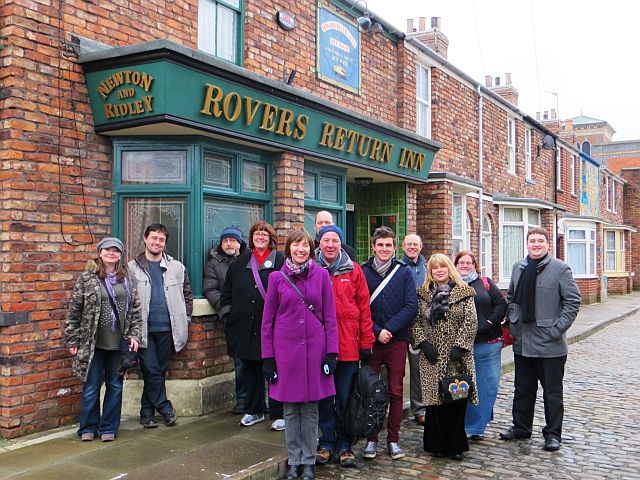 We had a look around the street set which was rather frosty around the edges. It had snowed a bit overnight but not so bad as to hamper the trains, luckily. Our guide from ITV showed us around and later, saying he was chilly, took us inside to one of the studios where we got to see a few of the iconic sets such as the pub, the Kabin, Underworld and a number of the houses sets. We were unable to see the other studio with the rest of the sets as they were still filming there.

While we waited to get onto the property, Sue Nicholls drove up and waved at us and as we trooped up to the Street, Shobna Gulati walked by and said hello and hoped we enjoyed our tour. I peeked into the green room as we walked by and spied Jack P. Sheppherd and Ben Price. 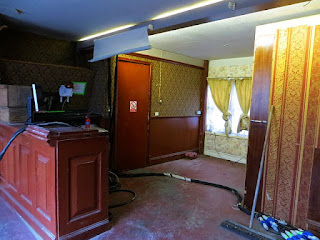 The door to the Rovers Return on the outside set was open! The wall behind it is decorated so that if they film someone going it, it looks like it should but did you ever wonder what is inside the actual buildings? Many of them are just shells with the doorway decorated correctly. Here's a photo of what's inside the Rovers.

I've been on the outside set a few times before and inside the studio once before. Many of the rooms have changed since then and it was great to see the Kabin which I had not seen my last visit. Our guide related lots of interesting information like how they make sure the room or kitchen of a house matches the personality of it's owner and what the way a room is decorated can tell you about that person. The somewhat chaotic mixture of patterns and lines in the Windass house was devised when Tracy Barlow lived there, just before she murdered Charlie Stubbs!

After we left the set, Mark escorted us on a 2 hour tour around Manchester and Salford to show us locations that have been used for filming over the years including the location used for the Red Rec,  and the Salford Quays area including a walk near the new Corrie studios still under construction by the BBC Media City.

Huge thanks go out to Mark Llewellin for his time and effort and for the tour,  and to ITV for escorting us around and telling us loads of interesting things about the show including the fact that orange is used on every set where there has been a fire!

There are loads more of my photos here.