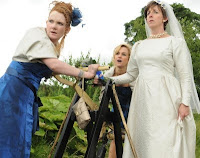 News broke this morning from ITV that Julie Hesmondhalgh has decided to leave Coronation Street to persue other projects full time. She's only just back from an extended leave during which she'd done a play and as it was successful, realized she wanted to do more of this. I truly don't believe this was any decision on the part of the new producer that started this week, either. I'm sure this comes straight from Julie herself.

This makes me very sad. Roy and Hayley have the most stable relationship on Coronation Street and are one of the most loved couples and characters. I can't imagine Roy without Hayley and I'm sure I'm not alone in that. ITV will have plenty of time to plan her exit since she's not going until the end of the year, I'm guessing in a dramatic Christmas exit.

I do hope they won't break up this couple. It just would not do to have them separate and divorce. Given that, it is probably inevitable that Hayley will die somehow, either by illness or accident, leaving Roy bereft. I feel gutted already, just thinking about scenes where she'd die in his arms! I hope at least, that his mother, Sylvia, is still in the show as Roy will need the support.

The character of Hayley was a bit of a ground-breaker back in 1998 when she was introduced as a transexual. Julie H. did lots of research and made friends with several trans-gender folks, ensuring she got the character just right. The publicity around the character and Julie's involvement in several charity and support groups helped change the laws around being able to change the gender on birth certificates and other rights. We were all rewarded when Roy and Hayley were finally able to marry legally two years ago! 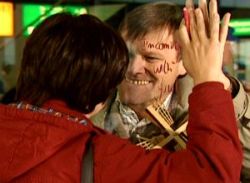 One of my favourite Hayley moments was when she was in Amsterdam and Roy came to see her. He finally got the courage to ask her to come back to Weatherfield and be with him and she hesitated at first but came after him to the airport. She caught his eye through the window and wrote on the glass in lipstick "I'm coming with you" and Roy's face broke into the most heart warming smile, full of love for her.

Another wonderful moment was, just after their first "wedding" in the cafe, when Hayley told Roy that she changed her name by deed poll since they weren't able to marry legally at the time.

Hayley had a wonderful relationship with Becky McDonald, who fiercely defended her on more than one occasion. Hayley and Roy maintained faith in Becky and gave her the confidence to "grow up" as it were. The only really regrettable storyline was giving Hayley a long-forgotten son, Christian and that storyline has been pushed into the closet as best forgotten all around.

Her red anorak is now iconic, her frumpy dress sense and clip cloppy shoes echoing along the cobbles are her signature style. Her giggle and sunny smile to anyone and everyone and her dignity in the face of insults and adversity are legendary. Hayley always finds and brings out the best of people, she forgives and understands. She supports. She mothers lost waifs and strays. She's ever the optimist. All of these qualities are those that make me admire her greatly. She is a good example of womanhood to follow!

I know the Street will go on without her but there will most definitely be a Hayley shaped hole in it for a long time to come.
Posted by Tvor at 11:41

Nice posting, Tvor. This is such sad news for fans, but I'm happy for Julie. I sure hope we get lots of good storylines in the remaining time we have left with her on the show! Such a classic Corrie character, and then some! :-)

Thanks maggie! I am happy that it was Julie's decision, that she wasn't fired by the new management and that she'll get to stretch her talents but very sad to lose Hayley and possibly Roy. We may not lose Roy but i personally think it might be harder for him to be on the show without her. But as long as they don't throw him at another woman, it might be ok. Roy really only has had and always will have the one soul mate.