Is Eva the new Raquel? 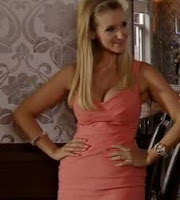 If you watched Corrie in the 1990s you may remember Raquel Wolstenhulme. She's the tall, leggy blonde barmaid that enchanged Curly Watts and eventually broke his heart when she finally grew up and wanted something of her own, something he couldn't give her. Raquel had a misguided sense of style with tight tops, short skirts and little fripperies in her hair.

She had airs above her station, with a burning desire to be a model though never really made it past Miss February on a lads' calendar (with her clothes on, mind.) Raquel also always fell for the wrong men, men who desired her but never loved her and the one man that did love her, Curly, was her safety net when she couldn't have the one she really wanted, Des Barnes.

More and more, I'm seeing parallels with our Eva Price. She's blonde, she's not the sharpest knife in the drawer, she falls for men who don't really want her, she's their "Miss Right Now" instead of the love of their life. Her sense of fashion is getting more and more "out there" with bows and decorations in her hair that are starting to worry me and dresses that are only half there. I'm not the only one to notice the similarities. Flaming Nora blogged it and David has also become a fan on the Coronation Street Blog as well. I forgot about those posts when I started to write this!

Mind you, she fills out those dresses like liquid and she looks great in them, but it does detract when she turns around and you see the whole of her bra across her back. Maybe she's just making it easy for the fellas? I dunno.

She's makes tragic choices in men, too, just like Raquel. She showed up on our screens, having dumped her fiance whom she found cheating on her. She seems to have latched on to Nick who dated her for awhile but Leanne was the one he really wanted. She took up with Rob when we all knew he wasn't serious about her. He chatted up her mother behind her back and Eva caught him in a hotel room with a random waitress.

Now's she's got her sights set on Nick again. Nick, who dumped her and then took up with her newly discovered half-sister. If she has her way, she will successfully break up Nick and Leanne or at least ruin the wedding. I've heard she may even try to outshine the bride with her bridesmaid outfit. I shudder to think.

All she needs to complete the Raquel transformation is to find a really nice bloke to fall for her, but someone that she wouldn't wipe her stilettos on until every other man breaks her heart. I would have said Tyrone would be the type of man to fit that role but of course he's got his own tragedy unfolding. How about a new character? A nice, steady working postman or drayman perhaps?

I think Eva may have a little more on the ball than Raquel. I think she's perhaps a little less naive and she's certainly able to stand up and fight for herself when wronged, something Raquel never really did. Raquel didn't have a bitchy bone in her body but Eva excels in it when the need arises.

Having said all this, I do like Eva. I like her snarkiness, her fashion faux pas, her comic timing and to be honest, even though it's not my "bus", she's hot!
Posted by Tvor at 17:13