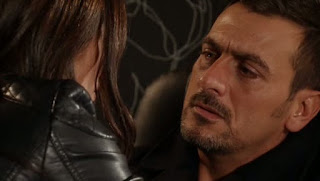 It was a rough old week on the cobbles for Peter Barlow. He's returned with a Zen attitude and found himself right in the middle of a conundrum. He's had to choose between his child and his partner and it's a tough spot to be in.

He wanted to see Simon for Christimas and that was that so Carla came with him, against her better judgement. As she accused him, it's always what he wants. It does seem to be that way, too. One whiff of a little boy's puppy dog tails and Carla was hitting the bottle though Peter seems to be doing well on that score. She spent most of the next two days on the sauce including a rerun of the plot where she goes to the school to pick up Simon while drinking. He grabbed her keys and ran off like a smart little boy. Peter hollered at her, why did she take the car when it's only around the corner. Indeed.

I did think the fight between Leanne and Carla was a good one. Lately a lot of the squabbles on the cobbles have been a washout but this was right up there with Sally and Natalie and the classic one between Gail and Eileen in their dressing gowns. No, nothing can really beat that one but Leanne really did round on Carla and wallop her. You can't take the Battersby out of the girl and Leanne was furious that Carla was going to drive drunk (or near enough) with Simon in the car and you don't rile a mother hen, do you! Carla also made things worse and pretty much had that left hook coming.

Why does anyone pick up their kids and walk them to and from school when it's only around the corner and they're not 5 years old? That's one thing that's long irritated me.

Carla can't take the pressure and there are a lot of bad memories for her in Weatherfield, to be sure. I wonder if some of it isn't the spectre of Leanne. Surely someone like Carla can handle a child not liking her. The feeling is mutual with most children for her anyway but having Leanne around is another thing. After all, if they run around on their spouses with you, they could very well run around on you and Leanne and Peter have unfinished business and unresolved feelings, it's pretty clear. She's more of a threat to Carla than Simon.

Then again, an awful lot of new couples have a very rocky time when it comes to step children who put the natural parent in a tight spot. Children should be the priority but a lot of kids know it and play on it, like when Simon got angry that his father was leaving again and said that Nick was his new dad. He knew that was the worst thing he could say. Add to that the healthy (or unhealthy) amount of guilt Peter has about leaving Simon and you have a recipe for disaster. Peter has let down Simon more times than Carters has little liver pills in his short life and well he knows it.

Again we have Ken's abandoning of Peter making inroads as well. Peter doesn't think him leaving Simon is the same thing. It isn't, but it is, too. Maybe Simon has a mother to care for him where Peter didn't but after all the times Peter's let Simon down, with this on top of it all, doesn't Peter think that Simon would group up resentful every bit as much as Peter did? Don't repeat the cycle, man!

Simon is very good at playing Peter and did so when he ran off to find his dad at the airport. It came down to a final choice and Carla knew it as soon as Simon ran through the doors. Peter had to put Simon first and  Carla made him do it. Simon had no empathy whatsoever when Peter saw Carla off tearfully. 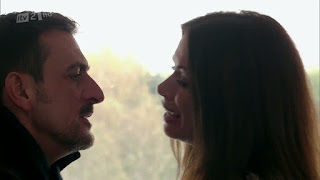 I did have to laugh though, after Carla and Peter checked in and later, Carla was running for the boarding call? They filmed that in the walkway between the terminals at Manchester airport. She was still outside of security, in the next terminal actually. She had quite a hike to the terminal from the look of how much moving walkway was behind her, and from the terminal, a good distance from the gates once she got through the lengthy security lines. Trust me on this.

Anyway, now Peter is staying in Weatherfield, in Carla's flat, I assume, for now, and Nick isn't going to be too happy about it. He knows down deep Leanne still loves Peter in spite of the hurt and pain though he won't admit it. Peter might be all calm, cool and California Collected but I happen to think he's also had a Zen course in smug. He smirked when he found out the Vegas wedding was off and had another one of those smirks when telling everyone he was staying. With Carla out of the picture, is he going to try to work his way back into Leanne's heart if only to get his own back on Nick?

Nothing would surprise me.