The wedding of the year: Love it, Hate it 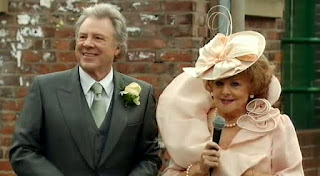 Things I loved (or at least enjoyed) about the wedding episodes: 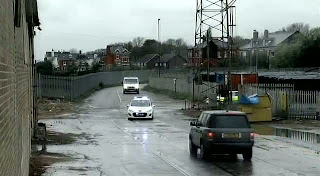 Things I hated, disliked or just scratched my head in confusion over:

I must say the wedding shenanigans were much more interesting than the Jubilee party itself. The costumes were fun but it was mostly just people running around in costume with not a lot of plot happening. Jason as Elvis had a few chuckles, with his Elvis-like comments. I'm sure some of them were ad-lib! There was the hotpot business, Tracy chasing Steve around (boring, and I thought he looked more like a young Elton John than John Lennon),  and a little bit with Owen and Anna getting back together . Which leads me to ...

That awful, repulsive Sunita and Karl mess. Why didn't they go up in the flat like they have been? Why go into the shop back office when the flat was 10 feet further around the corner? And that cringeworthy line of Sunita's about wearing nothing under her costume just doesn't fit on Coronation Street. I don't think it even fits on Eastenders! It just defies belief and taste.

Overall, a really lovely wedding. Weddings, unfortunately, can never run smoothly and if it had to be like this, then at least they've caught the bad guy and that storyline is done and dusted.

Sylvia was apparently hiding, grouching and bad tempered. The spoilers had said that she was upset about all the romance while she was alone and I thought we'd actually get to see her making a few choice comments or looking sad and missing Milton. I guess one sour face among the guests (Norris) was enough. Two would have curdled the cream.

Nick didn't dress up. I suppose he thought it undignified or he couldn't think of any pop star he could possibly resemble. I know who I'd have suggested. I think with a wig and shades he'd be a dead ringer for Rick Ocasek from The Cars! Don't you think?

The wedding in photos.
See more pics of all the costumes for the Street party here.
Posted by Tvor at 08:29

Aw, I did tear up when "On The Street Where You Live" started playing! It was a gorgeous version, almost jazzy, and gave a nice ambiance to the wedding. I too thought the wedding "hitch" was handled well and the loan shark story is finally done.

Tina did play the frightened hero well, didn't she? I can't blame Tommy for being scared. I think he was blameless as a result of Terry running off with the $$ meant to pay Rick off. I might have been spineless too. I guess her splitting with Tommy came after she almost lost Rita, after losing her Dad. When she left home, I think she was ready to stay with him if her plan worked, without the bride almost being drowned.

The Jubilee party was fast-paced. I could hardly catch some of the characters. I think most agree that Karlnita was yeeuch! Need to wash eyes & ears. Elton John, not John Lennon, yep. Tracy looked well cushioned as Cher, and odd. Loved Kylie & David's costumes.

Nick could also have dressed as Keith Richards, or even Mick Jagger.

Really enjoyed the Wedding/Jubilee, even with the small drawbacks.

hahaah Yes Nick would have been a good Keith Richards or Jagger, too! He's got that sour looking face!

I think, in spite of the direness of the thug drug storyline, the ending was acted very well. I don't blame Tina for going off on one, after what Rick put her dad through as well.