Peter does the right thing 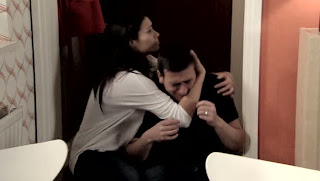 For all that Corrie has had a habit of featuring overly sensationalized storylines in recent memory, it still presents us with good, old fashioned soap fodder like this recent custody case over Simon. Regardless of whether you think Leanne, who is not blood related or related by formal adoption, should have Simon, or not, the fact remains that Simon considers her his mother and she's mainly the only mother he has any clear memory of.

The whole divorce was filled with acrimony from start to finish. Carla had been a thorn in Leanne's side for over a year where Peter's concerned and Peter tried and tried but couldn't keep away from Carla. The way the affair came out, with a photo in court, couldn't have been any worse than if Leanne had walked in on them in bed. Because Simon steadfastly refused to give Carla any chance at all, Peter dug in his heels and he thought taking the hard line would have the desired effect. 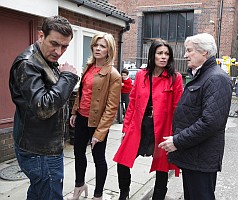 Of course, it had the exact opposite effect and a little 8  year old boy was torn in bits in the middle of the slanging matches, the rages, the upset. He was forbidden to see his grandparents and his mother and his whole world was in tatters at his little feet. Every time he acted up, every time he cried, i thought for sure that would make Peter realize that he wasn't putting Simon's needs first. He'd say he was but would t hen dig his heels in further after yet another argument.

Carla, surprisingly, has been the most sympathetic character of the trio. She often tried to play peacemaker for Simon's sake, appealing to Peter, Leanne, Ken, anyone that she thought would help the situation even though Simon would reject her over and over. She was the only one that tried for the sake of the child to be reasonable. But her weakness for alcohol was the result it all blew up in the end. She bought the bottle of wine and hid it.

I don't blame Leanne for going for custody. Peter and Carla are on and off the booze regularly. Peter was ready to confess to a murder he didn't commit (after yet another alcoholic blackout) which would have abandoned his child. Peter put Carla first time and again. You have to sacrifice when you've got children and he hadn't got that through his hazy skull.

But finally, Simon reached out and found a bottle of wine (which must have had a screw top on it) and, seeing his father turn to the bottle over and over, thought that was the way to make your troubles disappear. And finally, Peter listened to his son and realized the example he'd shown and did the right thing. He gave Simon to Leanne's care and collapsed in tears in Carla's arms.

The whole storyline was interesting to watch, pretty realistic and true to the characters' personalities. It was painful to see Leanne and Peter taking chunks out of each other, with venom, jealousy, hate, hurt, exasperation and anger. People really do fight that way and there's every emotion under the sun in play. The final week in all of these ups and downs was classic Corrie and it goes to show you what they really can do when they try. Put soapy storylines, real life problems, cracking acting and spot on writing altogether and you get gold.

There's a really good interview with Jane Danson on this storyline here in the Daily Mail.
Posted by Tvor at 11:26

You are spot on with what you said about Carla. Her selfless attitude has taken me by surprise. She has been the only one considering Simon's feelings above everything else. The truth is Peter AND Leanne have behaved terribly.