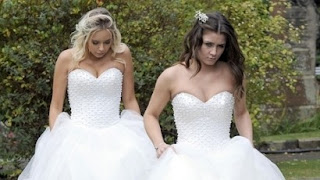 The brides looked really lovely in fairytale frothy dresses. The house and the church were decorated in white flowers, white for innocence. But one of the brides had doubts and in the face of God, couldn't manage to get the words out. The father of that bride spoke up. He knew his daughter had some collywobbles. So did her friend/employer, even more than her father. And the bridesmaid who was at the root of the doubts knew that the bride was making a mistake.

I think the guests at Coronation Street weddings must be getting used to weddings getting interrupted and not coming off. We had two this year alone! No wonder Rita hasn't bought a new hat for one in awhile. She's worn that black furry thing for most occasions in the last few years.

Sophie might be over her crush on Amber, but it served to show her that maybe she's not ready to settle down. I do believe she loves Sian and loved her all through everything else she was feeling but at 17, is that enough? Kevin didn't think so. He tried to talk to her in the conservatory with that sad Adele song in the background and then he was the one that stopped the wedding when Sophie was hesitating.

Sophie herself tried to talk to Sian but Sian overwhelmed her with loved up words and gifts. Most of us grownups have been watching this unfold and thinking that we knew 17 was far too young to get married and it will all end in tears and that's what happened. Kevin and Sally both felt that way about it but when the girls tried to elope, they backed off and went along with it. Sometimes  you have to let your kids make their own mistakes but faced with them running way, they were in a hard place. I'm sure both of them felt it was a mistake, too, even before Kevin discovered Sophie was having doubts.

And it most definitely did all end in tears. Wailing, crying, sobbing, shrieking on the street. Should Kevin have interrupted the wedding like that? Did it hurt him like a knife through his heart to see his little girl in a white, frothy, soggy heap on the pavement with her heart in pieces all over the cobbles? I bet it did but I also think he did the right thing. 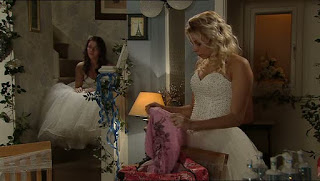 Sophie had a crush on Sian and she had doubts. By the time she got to the altar, she was over it but the doubts were still there and before her God, she couldn't say the words. She's 17. She's a kid no matter that she wants to be considered grown up. Sian was her first love and it was difficult because coming out as a lesbian is not going to be easy for anyone much less a teenager. All of that is a lot to get your head around at the best of times but at 16 and 17 when your hormones are all over the place and when you aren't as mature as you think you are, marraige a disaster in the making. 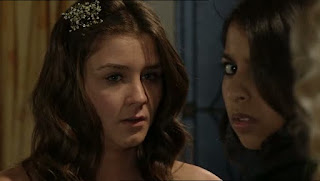 It's telling that Sophie wanted to hurry along the wedding to prove to herself that she didn't love Amber. Amber was only winding up Sophie at first but she knew Sophie was making a mistake. I think she just went about it the wrong way, trying to play on her emotions. Or maybe that was the only way she could have done it to really make Sophie think.

Sophie and Sian were a really good couple, I'm not saying thatthey weren't. Best friends turned into lovers and they were really sweet together. But they were still kids. I think the same way about Chesney and Katy, moving in together and planning a baby. They really aren't equipped to handle the really tough times that are going to happen. Relationships are hard work and even harder at that age. Chesney might be more mature than Sophie because he's not had a sheltered life. He's had to learn how to survive in spite of Cilla so maybe he's grown up a bit faster but Katy has been most definitely sheltered even though Owen has brought her up on his own. I don't know if they can survive as a couple, as sweet as they are together.

But this isn't about them, I only mentioned them to point out some similarities and so you know I am not approving of one and not the other as "too young".

I still felt bad for both Sophie and Sian and had to swallow hard a few times watching Sophie in a heap on the ground and Sian crying her eyes out in the car. Sophie is blaming her father but down deep I think she'll realize she really only has herself to blame. She's got to find a way to pick up and make a future for herself. She's had a bad year, too, what with the revelation of her parents' breakup, the tram crash, dropping out of college, falling off the church and now having her relationship blow up. I'd like to see her go back to school and maybe university. She always had the potential before and would have been ok in college if her life hadn't got on top of her.
Posted by Tvor at 11:07

Also, while I've heard and seen, "Relationships are hard work" many times in a variety of places, all it makes me think is, "If it's that much work, why bother?" That's exactly what I thought about Sophie and Sian's relationship.

That's a good summary of the Sophie/Sian relationship, Tvor. I understand that Amber was at some point trying to get across to Sophie that she's too young to marry, but all along Amber was made out to be a nasty game-player and it was hard for me to believe that she really cared. Chalk that up to a failed soap personality transplant when Amber returned from uni.

I don't know what, but I felt there was something missing from the wedding episodes, which I was looking forward to. I usually hate to be critical of actors, but I got very distracted by Sian's constant giggling and the general poor enunciation of both the actors. I watched it with subtitles, and there were whole phrases literally skipped over, or mumbled over. Were young actors ever that mumbly in early Corrie years?

Despite all this, I too felt awful for these two young'uns. Sophie's got a lot to get over at this point. She was always the 'good' daughter, and a strong person. I still think she is, though Rosie sure shines when it comes to protecting her sister!

maggie, i remember the teenage Tracy Barlow being very difficult to understand and other young actors have been as well. The one that played Warren Baldwin and Mike Baldwin's son Adam were two others that were really bad.

I do think Amber cared but she did go about it the wrong way.

The sooner the two lesbians leave the better. The 'wedding' was embarressing to say the least. Corrie scriptwriters have really hit rock bottom. It's a great pity the tram didn't finish off the lot of them. Come back Elsie and Ena.

You're out of luck, then. Sophie isn't going anywhere for awhile. I didn't think the wedding was embarassing at all, except for the fact that it didn't go through. And you know what? I bet Elsie Tanner would have been at that wedding with bells on.

Yes, Tvor, I remember some of the relatively recent young actors being hard to understand, like Adam Baldwin. I was thinking more of the really old days, like in the 60s, 70s and even 1980s. Anyone recall how the youth spoke back then on Corrie? I don't think they would have got away with mumbling their lines. And I wonder why the change.

There weren't really a lot of youngsters back then were there? Mind you i found the accent even in the adults a lot thicker back in the old days.