Defending Peter and Carla...sort of 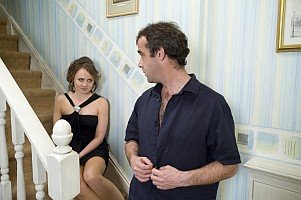 I've been reading a lot of really negative reaction to the pairing of Peter and Carla and I'm here to defend them. Kind of. I am not a fan of the couple. I really prefer Leanne and Peter together but I don't think this is the worst couple "ever", as I've read some people declare. One person even said it was worse than Kevin and Molly.

At the risk of coming over all Panto, Oh No It Isn't! Nothing could be as cringeworthy as "Molvin". That had to be the most ill-conceived pairing every and that is most definitely pun-intended.

I think Peter and Carla do have a certain chemistry and and I like both characters as well, just not as a romantic couple but you have to have triangles on soaps, it's a stape plot device. We could see this one building up for over a year so at least it didn't feel like it was thrown together. Kevin and Molly should never have been a full blown affair. It would have been understandable if Kevin had developed a middle age crush on a cute young woman but all the rest was repugnant even if it did provide storyline fallout and fodder for another whole year. 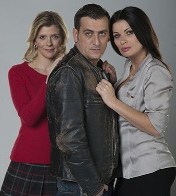 Some people don't like Alison King as an actor. I didn't at first but she seems to have relaxed into her character and they've written some vulnerabilities into her character as well. I've long been a fan of Chris Gascoyne and I find he has chemistry with whoever he's on screen with. I do find it a bit out of character that Peter would disappear for 24 hours without letting anyone know he was ok, mainly for Simon's sake but he's an addict and I think he's about to replace booze with Carla.

I don't think they'll end up together long term but this will again create a catalyst for the storylines without which we wouldn't have much to watch, now, would we? With Leanne fighting her corner, and Ken lecturing Peter on his failures and Simon's disappointed little face tugging at our heartstrings, we will ride this one out as we do everything else, waiting for the outcome and fallout.
Posted by Tvor at 09:36

I have to say I genuinely am a major fan of these two. I agree that Leanne is better for Peter in the more stable family man way but looking back on Peter's character I think Carla is the first woman who I look at and see the challenge and yet the things in common. I think Chris and Alison have amazing chemistry and for the fact they have built this up over a year I really hope they do become more than an affair, I think the fall out and story lines from it could be spectacular!

Thanks for commenting with your defence of them! It's great to get all points of view here!

I absolutely love Peter and Carla together.

Alison King is one of the most popular actresses on Corrie. In 2011, Carla had so much going on, she had the rape storyline, the car crash (when she ran Stella over) and the Carla and Peter affair. At the end of this Alison walked away with the Best Actress award at the British Soap Awards. I'm really glad her hard work paid off.