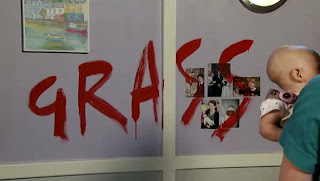 Where last month was Barlow month, this month was Fiz month. Make sure you remember, she's got a suspended sentence on the fraud charges, that was thrown in there but the murder charges still stand. I guess they figure they could get her on that so more or less forgave the other charges that she actually admitted to. We have seen her dealing with the drugs dealer, Ruth and, having snitched, she's now terrified for her safety and that of her baby. It might be prudent to give that baby back to the Croppers now. I do wonder, though, as much as these women threaten to hurt Hope, if they actually would harm an infant. I think there's some that would be hard enough or damaged enough but overall, I don't think most women would have it in them to hurt a baby. Fiz can't be sure though. 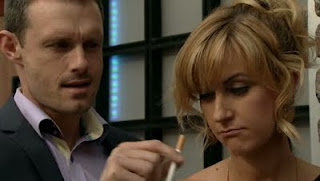 I know a lot of people are tired of Becky but I'm not and I find it sad though inevitable that she and Steve have split. Now she has to face the prospect Max back on the street again with Kylie, Becky's worst nightmare. Meanwhile, Kylie and David are trying to modernise the salon with spa treatments that Kylie is supposedly learning in college. I think they've only just told her about them. It's good fun to watch though. Poor Kylie jumped from the frying pan into the fire with her attitude, lashing out and blackmailing Audrey. I knew from the first I would enjoy Kylie and Gail at each other's throats and I've not been proven wrong. I'm also not surprised that Kylie and David make such a really great couple. Kylie just goes from strength to strength as a character, played by the most excellent Paula Lane.

Seeing Becky bond with Hope was nice, too. The media of course screamed that Becky was going to run off with Hope when all she did was consider it but in the end only went to the park with the baby for a bit. I never thought she'd do it. You really do have to take the tabloid headlines with a grain of salt sometimes. It's a shame that there are people willing to sell storyline leaks to the tabloids and it's shameful the way the tabs try to manipulate readers.


And it looks like we'll soon see the end of the Gray family. I won't be sorry to see the three of them go. Dull, boring, pointless, just like their name. Gray. Dropped the plot of Chris's domestic violence though when he first came on the scene, Cheryl did say it only really started when he was unemployed and feeling very down on himself. I suppose you could use that to get round the apparent turnabout. Now he's grappling with a brain tumour. Heavy stuff and really, the actor isn't a bad one. But the problem is he's acting circles around the one that plays Cheryl. So the Gray family will be leaving and Lloyd is going to be stuck living with that awful bright pink sofa and that tatty pink flowered wallpaper! No wonder he'll be hiding out for awhile (in real life, the actor will be off for a bit filming a new series of Red Dwarf) 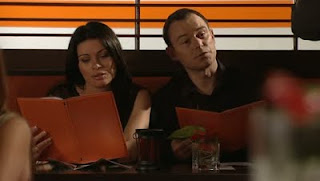 Frank is another character I don't really care about. I don't imagine he's in it for the long haul and he's being set up as a villain but having him pant after Carla like a puppy in heat is unworthy. No complaints about the actor, he's fine. But villains need to have a bit more about them and I just don't buy it. He doesn't have that edge like Tony did or even Richard Hillman. And for a smart (supposedly) man, he's pretty stupid. He proposes, in the middle of the pub which is pretty much tradition on Coronation Street, and when she turns him down, he figures she's still in love with Peter. Which she is. But when cornered, she says she'll marry him and he goes all gooey eyed.


Marc decided to come out on, coincidentally, Manchester Pride weekend. Sounds like calculated timing on the part of the Powers that Be. It was a brave move but unfortunately, everyone's including Audrey's reactions are more often the usual. At least, though there were a few jokes made at Marcia's and Audrey's expense, they weren't really mean spirited. Stella showed perfect landlady aplomb, she's probably seen it all anyway and Mary just wittered on idiotically as usual. I'm starting to this this character is past her sell by date.

Back home, once the shock and initial anger wore off, Audrey was calm and honest with Marc about not being able to cope the way she thought she should and the way she wanted to and tried to but couldn't, knowing that she just couldn't do what she knew was the right thing. It's sad to see her heart broken again but she handled it all the right way at least, rather than screaming and shouting though still angry at the start.

The storyline might have been ill-conceived and badly cast but I thought the concept was good. And, while these situations often will have a happy ending, (think of Roy and Hayley's situation which is different, but not all that dissimilar in some ways) having it end this way shows that things don't always get tied up in neat little packages, Happy Ever After and it was the right ending for a storyline like this that involved a character like Audrey and was very true to the character herself.
Posted by Tvor at 17:17

I read your blog regularly, simply because anything to do with Coronation Street is worth reading. However, I do wonder why you bother and even if you do actually like the programme?

There are so many storylines or characters that you openly admit to disliking, I just don't understand why you call yourself a fan. For example : -

"The storyline might have been ill-conceived and badly cast"

"Frank is another character I don't really care about"

"I won't be sorry to see the three of them go. Dull, boring, pointless, just like their name"

"Although I hated the Molly-Kevin affair, as did we all"

I could go on, but of course the worst part is that you are happy (especially with the last of these quotes)to suggest that everyone shares your views. For the record, most people I talk about the programme to, have totally opposite views. I, for one, enjoyed the Molly-Kevin affair, and the Grey family are anything but dull.

I didn't think Frank was stupid for going along with Carla's capitulation over his proposal. I took that as another sign of how dangerously manipulative and controlling he is. This is a man who likes to get his own way at all costs - he is all charm when things are going well, but when he is thwarted he becomes quite menacing, as both Maria and Sean have discovered in the past. Right now he has decided he wants Carla - and the real weakness in the story lies in its failure to fully show us just why Frank has set his sights on her so strongly. Regardless, Carla is what he wants, that much is clear. And it is also clear that he wants to be the one who makes all the decisions in the relationship – I dunno, maybe he gets a kick out of making a strong woman kowtow to his whims, but he has been the one actively pushing the relationship forward throughout, sometimes quite subtly but other times quite forcefully. When she rejected his proposal it was a huge blow to his ego - so he promptly used what she had told him in confidence against her, put her on the spot and threw accusations at her, got her so worked up that she accepted his proposal in sheer self-defence. And I'm fairly certain that the reason he went along with her acceptance of the proposal wasn’t because he was fooled by the sudden turn-around, he wasn’t thinking ‘oh, thank goodness, she does love me after all’ – I think he was satisfied simply because he’d got his own way. He’d made her agree to do what he wanted her to do, despite it being something that she had clearly stated she didn’t want to do. I don’t think it is about love at all for Frank, it’s about control.

To Chris: I do love the show, and i guess you missed those first few paragraphs where i mentioned that i did enjoy watching Kylie and Gail and Kylie and David and just anything Kylie at all. I was also not negative about the Fiz storyline, i actualy like it no matter what other comments i've seen around the internet about it. I never liked the Gray family, true, and Frank isn't supposed to be likeable but he doesn't have that real villain chemistry. I thought Tony Gordon was great!

I'm certainly not alone in disliking both the immigration storyline and the Molly/Kevin one, very few people I've spoken to or read comments from here and elsewhere have thought either were a good thing. I think i may have seen a very small percentage of people enjoy the immigration storyline. I don't remember one person saying they enjoyed "Molvin", thus my remark "as did we all".

Llewella: I only said Frank went all gooey eyed, Yes i believe he's a dangerous control freak, which is why i would have expected him to react more smugly or triumphantly at her capitulation. I agree it's all about control with him but as you said ‘oh, thank goodness, she does love me after all’, and that's how it came across to me. Perhaps that was the direction or the acting rather than the actual intent of the scene but that's how i perceived it.

I do love the show, there are sometimes storylines or characters that i absolutely hate or find tediously dull. With this many characters and so many storylines ongoing, there's going to be some. I do write about stuff i love as well as stuff i don't. I'm glad you all do read the blog and Please, any comments are always welcome. I may not agree with your point of view and i'll defend my own but that's what democracy is all about!

I thought the Molly/Kevin storyline was fantastic, quite possibly the best of the year!

I am aware of the upcoming story whereby he is supposed to rape Carla ( and that on the back of the business with Maria) but otherwise, he has come across as a thoroughly decent chap - the same could never be said about Tony.

Once the true facts of the rape allegation come to light, and the follow up actions by his mother, I will be in a better position to decide, but as a character, he is really nice.

Chris is far more of a nsty guy, but this has fallen by the wayside since his diagnosis. Other than that, I have no idea where your anti Grey feeling comes from. Surely your animosity should be better directed elsewhere.

Personally, the sooner David and Kylie leave the show, the better for all concerned - me included. The whole nonsensical Gail forgiving David (and Kylie by association)no matter what he does, has started to grate on even me by now.