Who should Peter choose? 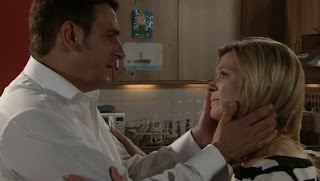 This sort-of triangle has been brewing and bubbling under the surface for a year. Every now and then it breaks the seal and bubbles over. It started off last year around this time when Leanne was busy getting ready to open the Joinery with Nick and Carla's drinking was getting out of hand. Peter was helping and supporting her but in secret, because she didn't want anyone to know. We could see Carla developing feelings for Peter, whether that was a false dependency or not, it was hard to say.

She even made a pass at him, just weeks before he was due to marry Leanne but he gently rejected her. She used her knowlege of Nick and Leanne's affair to try to drive a wedge between them and it's because of her that Nick and Peter were in the office at the club on the night of the tram crash. She'd encouraged Nick to spill the beans to Peter and he'd taken Peter in there for a quiet word just as the explosion and crash trapped them in there.

All the dirty little secrets came out and Leanne has been resentful and defensive about Carla all year. Peter has always been awkward around Carla but has always been faithful to Leanne. Lately, Carla's feelings have simmered over again and we saw Peter and Carla in a smokin' hot kiss in the flat while Leanne was in hospital, having lost her baby. Was Peter really giving in to his inner feelings or was he feeling guilt and pain over the loss and needed someone to reach out to?

Because she can't have Peter, Carla is feeling cornered into marrying Frank, a man she doesn't love, in much the same way as she married Tony Gordon after losing Liam. Now she's got all that guilt over having run over Stella and destroyed the betting shop and she's trying desperately to get Peter to see that he loves her, not Leanne. Is this yet another reaction to knowing she's marrying someone she doesn't love? Does she truly love Peter or is it still that dependency attachment and infatuation?

That's what I believe. I think Carla became infatuated with Peter and is attracted to him but I don't think what she feels is true love. She's always hankered after men that she couldn't have and married the ones she didn't really want as compensation.

Does Peter secretly love Carla? I don't think so. I think he does care for her and I'm sure he is attracted to her but I really think his heart and soulmate is Leanne. When he tries to talk sense to Carla, it seems to me that he isn't really torn between two loves and is staying with Leanne out of a sense of duty or guilt. He loves Leanne and they are a strong couple. Sure, he messes up sometimes as does she but they're good for each other and they're there for each other and they both know it.

I think Peter would have liked to be mates with Carla if Leanne hadn't been so insecure about it, but who could blame her? She knows Carla wanted her husband and she knows Carla still does. Women know these things. Should Peter have told Leanne that Carla was still after him? Probably, but it wouldn't really have helped the situation. It would only serve to push it back into out and out war and when they've all got to live and work and drink on the same Street, it's counter-productive.

So, I think Peter should choose Leanne. There maybe Peter/Carla fans out there, though. Anyone? What's your argument if you are on that side of the fence? (and I refuse to make those silly co-joined names of the couples, k? Just sayin'!) 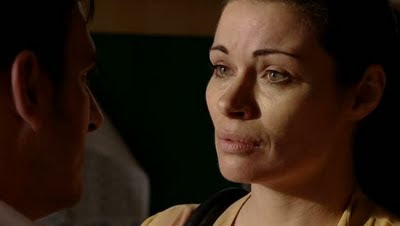 I think you're right with saying peter should be with leanne but I also like him and carla together aswell! if it was my choice I would have leanne with nick carla with peter oh and becky with steve lol from (alexclaridge on twitter)

Carla really needs a man that doesn't belong to anyone else, that she can really learn to love the right way.

Agreed. I've never felt the slightest inkling that Peter's intentions toward Carla were anything but honourable. He likes her, he finds her attractive, he thinks she's good company, he feels responsible for her (largely because he was the reason she wouldn't commit to the AA group) and he cares about what happens to her, but he has never been in love with her. I don't think he's ever seen her as anything but a mate - far from being jealous of her boyfriends, the way Leanne used to be with Nick, he has always seemed to like the idea of Carla finding someone to be happy with, not least because that would get her off his hands! The trouble is that Carla's feelings for him have tainted the friendship they used to have and made it completely untenable.

Carla is one hell of a mess at the moment. Peter was good to her when she desperately needed support and she latched onto him because of that. She sees the strength of the family unit he and Leanne have built and she craves it for herself. Last night she was beyond desperate, clutching at straws as she tried to convince Peter that his covering for her must mean that he loves her after all, completely failing to see that he simply felt sorry for her. I saw no conflict in Peter at all when he cut his ties with Carla and went home to Leanne - he looked absolutely content with that decision.

I really like that the writers have managed to craft such an intriguing, psycholgically complex storyline without any infidelity involved - it just goes to show that characters don't have to hop in and out of bed with each other to have interesting storylines! For that reason, and because I really like the Junior Barlow family unit and don't want it to break up, I hope that Peter never does succumb to Carla's wiles.

Absolutely. Peter never looked like he was torn, as i said, And as you said, Llewella, he looked completely content with his decision. Cozying up to Leanne later wasn't forced at all.

My friend is on Leanne's side, and i'm defo with carla! Only time will tell! :)