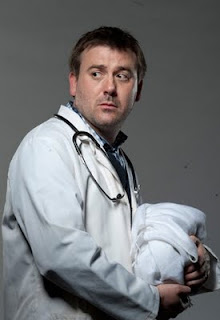 I want John Stape to die.

That sounds harsh, I know. But he has crimes to atone for. He has to pay one way or another. He didn't kill Colin Fishwick but he did steal his identity and hide the body when Colin dropped dead. He did kill Charlotte and he most certainly killed Joy even if that was an accident. She was having a heart attack or something similar and he held his hand over her mouth so she wouldn't call out to the neighbour at the door. I don't think he intended to kill her but it happened.

Now he's kidnapped the Hoyles and Chesney and has them tied in the cellar and the circle is complete. It started with a kidnapping and has ended with one. The body is going to be dug up from under the floor at the factory and John's going to lose the plot completely. All his misdeeds will come out because he won't be able to keep his mouth shut. And the rug that Colin is wrapped will probably be full of John's DNA as well so he'd get found out anyway.

The spoilers tell us he's going to take off with baby Hope. Fiz, chasing him will get hit by a car and end up in hospital where John and Fiz and the baby will be on the roof. Apparently he is going over the edge but some spoilers say he will survive and escape and go on the run.

NO! I really hope this isn't going to happen. He won't have paid for his crimes and that's just wrong in the world of soaps and is too much like a plot from the American soaps. Fiz will never be able to move on with her life if she knows he's out there somewhere. If he does survive, he has to be taken into custody and either jailed or locked in a hospital for the criminally insane. Unfortunately, with the kinds of things Phil Collinson is throwing at us these days, we could be in for just what I fear.

We're going to find out next week as the storyline plays out. The spoilers I've read are still circumspect, not letting out the secret which is a good thing. I like to be surprised now and then!
Posted by Tvor at 11:24

It would have been nice if John was going to settle down with Fiz. But that can't happen now with all the bad things he did.
Sorry John, I really like you, but it's all through Charlotte, that things were getting worse for you. Maybe you should die now to make life easier for Fiz and she might be able to start a new and happier life later on. As that is what she deserves.

Hmmmm, but what is going to happen to Fizz? After all, she was party to the identity theft, and she used some of Joy's money, so is this going to come out and how will she be forced to face the consequences? Poor, dozy Fizz!! :o(

Oh No! I love John. He is just misunderstood. Ha Ha!

Seriously I really think the whole John saga was one good piece of writing. I really felt like shaking him for making such stupid decisions but at the same time felt like giving him a hug. He can be such an idiot. But oh he meant well. All he wants is a quiet life! All the people he killed are annoying anyway. It's not real life anyway. Go on keep John in the show and let him live happily ever after please. I blame Rosie!

I've enjoyed the whole saga too but there's no going back for John now, he's completely deranged!

John should get away with the accidental deaths and be given custody of Hope.Fiz should carry the can.
o be married to that whining voice and dim female is punishment enough.