I was on holidays for a few weeks but luckily was in the UK so i could see Corrie. The only drawback is that I didn't get to make notes as I watched episodes so, using the lovely weekly updates that Glenda Young writes, I can refresh my memory and pick up where I left off. 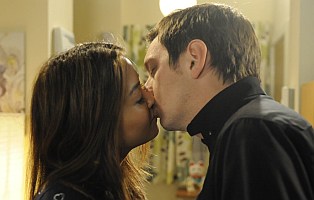 The Graeme/Xin/Tina triangle is limping along quite painfully. Oh God is this ever going to end? Well yes, it's ending in June with the exit of two of the three. The inevitable is  happening, you could clearly see Xin had a thing for Graeme and he's becoming quite fond of her, torn between the two women at the moment but the more day to day living he and Xin spend, the more they get to know each other and the more he likes her. Makes a change from pouty, stroppy Tina who's really ruined, I think. She was great when she started but she's swanning around with her nose in the air and a God Given Right to be everyman's fantasy, it seems like.

The return of Dennis Tanner was lovely, especially to get the end story of his mother, the legendary Elsie Tanner who had a fabulous death, dying in a red convertable, fag in one hand, her fella's hand in the other, after speeding through the mountain roads of south Portugal. We haven't seen much more of Dennis yet but I suppose they're easing him into it. Norris is already apprehensive and I suppose we're going to get more of Mary's hissy fits as his attention can't be made to focus on her. She needs more story. She's getting to be a one-dimensional character and that's a shame.

Anyway, Dennis. He's apparently going to be featured with a relationship triangle between Rita and Emily, both of which are too old for him, by the way but at that age, it probably doesn't matter. He's still got that old Dennis Tanner spark, too. Cheeky and charming. He even flirts with Roy's mother! She won't have it, (though I bet she secretly loved it) but it would make for some funny stuff! Ken's grandson, James, was brought back to facilitate Dennis' arrival. I don't expect he'll be in the show long unless they're thinking of creating a triangle with Sean and Marcus. Have they met James yet? I can see either of them fancying James as he's a nice looking man.

Gail is taking apron strings to new heights, isn't she? That woman really needs a life! Poor Nicky is going to be burdened with his mother for life at this rate. David is making inroads and seems to be wanting his wife to have her son back. Kylie sure isn't comfortable with it, in fact, she's panicking. She probably figures if he finds out she sold him to Becky, he'd dump her but when he found out, he had no thoughts of it, just figured on using it for their own advantage. Classic David.  I didn't think he would because as bad as he has and can be, he was horrified that Tina aborted his baby and I think he'd love to be a dad, even a step-dad (He was always fond of little Bethany, remember) and he's figuring they can now make it happen.Watch Becky melt down again and David and Kylie picking up the pieces. Granny Gail gets another grandbaby!

I can never figure Kylie out. I'm sure she loves her son, but she was way too young and just couldn't handle it. In an ideal world, would she want Max back? She might now that she has David and a chance at a stable life. She doesn't seem to yearn to be with him or cast longing glances across the cobbles, much. She doesn't seem to snatch the opportunity to give him a hug when he runs to her on the street. But yet, somewhere down deep, I think she's just afraid to show her feelings. 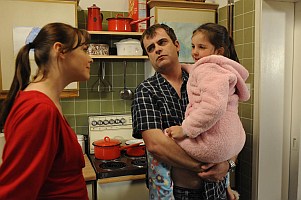 Steve-Tracy-Becky... it's actually a bit boring, isn't it? I do sometimes get so tired of Steve's spineless act. He won't stand up to Tracy for fear of losing Amy and it's causing just as much trouble in his marraige as Becky's insecurity and hate for Tracy but he doesn't see that. He thinks Becky should just sit back and accept what he has to do to keep Amy living next door. Personally, I think he needs to take a good part of the blame for Becky's jealousy and acting up. That whole Blackpool business was stupid. They didn't have to stay over, he could have sent Tracy and Amy back on the train.

And now, after 8 years or so, Amy has developed an allergy to milk products. Where did that come from? The kid seems to have some of her mother's manipulative genes, too, because she's deliberately making herself ill by drinking milk so that her daddy can come round more. Will Tracy stop and realize what she's doing to the child? No. Of course not. She want to take the child away from her father and her family. Yes, that's going to help. It won't happen, of course, because Steve can find a way legally and Tracy, as he pointed out to Becky, really doesn't want to raise Amy all alone without the safety net her parents provide.

And that brings us to the final countdown for John Stape which is peaking as we speak. This last week of May into the beginning of June sees the end of his character's run on Coronation Street. I really didn't like him at first. He was dull and he ruined Fiz. He was a liar and a manipulator and narcissistic. The Rosie kidnapping thing was all part of that. But then.... along came Colin Fishwick and things started to turn around. There were more twists and turns than a twisty and turny thing and the farce and black humour were rampant. John got himself in deeper and deeper, all because he just wanted to teach! He nearly lost Fiz but then she got pregnant and decided to give him another chance. 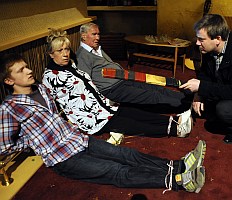 People keep dying around him and he is always in the wrong place at the wrong time but he did actually kill Charlotte and probably contributed to Joy's death though it did seem an accident as he tried to stop her from calling out. Because he's not really criminally minded, the guilt did him in. He does desperate things like kidnapping folks and now he's about to go completely over the edge, quite literally as well as emotionally. I don't know if he's actually going to die but we'll find out in a few days. I don't like him any more than I used to but the story has held my attention.

The vision of John frantically digging and uncovering Colin's body in that dusty old carpet, the look of horror on Fiz's face as she's discovered it. John musing over the moonlight while Fiz is shaking beside him, a dead body in the trunk... Everything hitting the fan at once. Graeme Hawley has been amazing in this whole storyline and will be missed, but Stape can't get away with the things he's done, it's soap law. He must die or be put away and pay for his crimes.

Wedged into this is Katy and Chesney, barely able to afford to eat, yet planning a baby. Silly children. Owen is trying to bully her into a termination and since she thought Chesney has run off, she nearly did it. I can understand Owen being horrified at a teenage pregnancy and given his history, not surprising that he was aggressively pushing her to get rid. He's another control freak and I don't like him very much. I think Eileen had a lucky escape there, as did Liz though she does like men with an edge. It's possible they're going to thrown him at Anna going by the few scenes we've seen of them already and that might be good for him, perhaps, if she can find a softer side to him. Maybe that's all he needs is the love of a good woman? They appear to have reformed Chris though that still might rear its ugly head but as it stands now, if they don't soften him, I think Owen has far more chance of being violent towards a wife/girlfriend.

Maria is back in the salon, and that whole factory debacle is done. Mostly. Frank is still around, has dumped Tracy, so who's next? I don't like him, not that we're supposed to, but he doesn't seem to be a fit, does he? I've enjoyed the Audrey/Claudia/Marc stuff, too. Some people haven't but I always like the older cast members to have a storyline of their own. I still say Marc and Claudia look like twins, especially with her deep voice! I doubt either of them are going to be around long.

Tommy Duckworth. Dull. Kevin and Tyrone's feud. Dull. Totally unrealistic that they'd keep on working together. Unfortunately, it makes Tyrone into a spare part. Anna is now a spare part. As is Owen. It's inevitable and it remains to be seen whether it will work. Jeff and Sally are getting dull too. She needs to dump him. Maybe now she's turned down his proposal we won't see much more of him. She can't get back with Kevin though. So totally wrong after all he's done.
Posted by Tvor at 20:17

I too think the older characters need more storylines but hoping the Claudia/Marc thing is over....the man could be a poster-boy for Dentures R Us! Sorry...but I think it was a real dumb-ass storyline. Tyrone is under-used right now.....maybe Fiz and him??

I've read comments from a variety of sources questioning Kylie's disinterest in Max. However, I seem to recall Kylie explaining the conflict between her and Becky as resulting from Becky leaving home in response to abuse at the hands of one of her mother's blokes and thus leaving Kylie in the clutches of the same type of man. If Max is the product of teen pregnancy stemming from abuse, it would explain Kylie's attitude and demeanor in general and particularly her awkward relationship with Max. Just a thought.

Kylie has shown no interest in Max and sold him for money. Social Services should hand him over to her, rather than let him stay with Becky and Steve, because they paid to keep him and so are evil and want to use him as a punchbag.

Oh for heavens' sake. give it a rest.