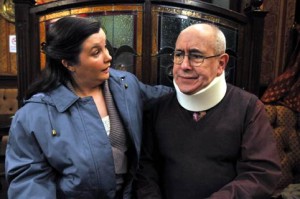 We all know that Mary is obsessed with Norris. We all know the reality of their little sojourn in the Dales. She very definitely sabotaged the motor home and she very definitely ripped out the phone from the wall so it wouldn't work. She broke his glasses which made him vulnerable and she brought a wedding dress with her. I don't know if she thought he'd run away with her. In her fantasies, she certainly did. She is an expert at twisting words to her own ends.

We didn't see her interviews with the police after Norris had her arrested for kidnapping him. It seems her mother is still alive and therein lies a big clue to Mary's state of mind. It sounds very much like Mary's mother is a very dominating woman and has spent years destroying Mary's self confidence. As much as she often does seem confident, in spite of her mother, it also seems evident that her mother is like a thorn in her side, a rock in her shoe, and she is a damaged woman.

I absolutely love the character, though. She was just odd at first and now we're getting more layers and seeing that she really is a bit bonkers. Patti Clare plays her with just the right touch. She's not putting the "crazy" in, she's playing it straight, a woman with vulnerabilities and years of trying to shed the millstone that is her dependent, dominant mother and whose hobby has turned into an obsession, a way of escaping her dreary life. 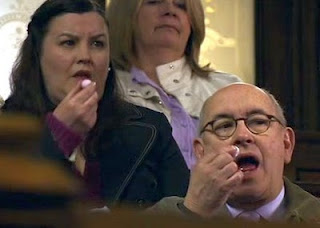 It was wonderful when Mary got to go on the road in the motorhome. She probably felt the free-est she's ever felt with no responsibilities and could go where she wanted when she wanted. I wonder if it was her responsibilities to her mother that finally brought her back or was it the call of Cupid? She seemed edgier and more "stalkerish" when she got back. Maybe having all that freedom gave her a sense of determination which, she hoped, would come to fruition on the moors of Yorkshire. Yet we still saw that her mother continued to harangue her by phone while she was away.

Now that she's off the hook, legally, she's coming around again, hanging out trying to insinuate herself into Norris' life, most recently attending Gail's trial with him. Norris is horrified and terrified and is sure that she won't leave him alone. And you know that? I think he's right. I think there's going to be more to this story, don't you?
Posted by Tvor at 13:14

I find both Mary and Norris highly irritating. The holiday in the Dales reminded me of Stephen King's Misery - I had visions of Norris tied to a bed with broken legs! It was a bit much. And I really don't understand why he'd tolerate her coming 'round again. I'd call the cops on first sight and get a restraining order! Just silly, imo.

Yes, it was meant to be a sort of "Misery" type thing. I do find them both irritating but Mary is such a nutcase that i also find her entertaining too. Norris is not, for me. Or rarely.