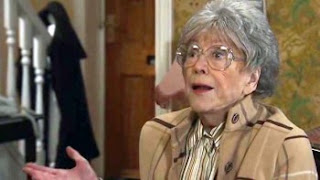 The main storylines in May were Gail's legal troubles, the death of Blanche Hunt which was very sad because actress Maggie Jones died back in December. This kicked off the return of Tracy Barlow who is determined to get out of jail, or at least to an open prison. She's also determined to cause trouble for Steve and Becky's adoption process by keeping her hand firmly on her daughter as a weapon.

Well, actually, even though we know Tracy is using Amy, I can't help sympathising with Tracy who sees her daughter being brought up by another woman. Of course she doesn't want her daughter to forget her and changing Amy's name to McDonald is another step in that direction. But of course, Amy should be the priority and if it makes her feel more like part of the family, then Tracy should allow it all. Nobody would try to make Amy forget her mother but Tracy doesn't see it that way. After all, if Steve and Tracy had married, her name would have been McDonald anyway! 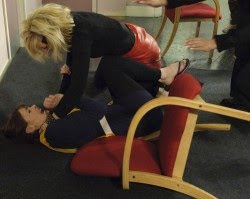 Tracy manages to get her backside in Gail's cell, quite the trick considering Tracy's convicted and Gail's only being held on remand. Suspending disbelief here. Tracy always was a good liar. You'd think they would have checked her background, wouldn't you, before they decided to trust her to get Gail to "confess". She got lucky with the rolling pin being where she guessed it might be and that's all they needed. Gail has a huge amount of circumstantial evidence mounting up. If they bring in witnesses to her history with Joe, all his financial and drug troubles aren't going to make her look like a saint. It's going to make her look like a saint that reached the end of her rope!. So Tracy's lies could very well get Gail a cell on the convict side of the prison. Her lies are also causing friction between the Barlows and the Platts. David nearly heaved Ken's window out and Nick and Peter have been nose to nose as well.

I know they're planning on having Tracy out of jail by the end of the year but I can't see how that's going to work. I think it would have been better off seeing her in prison causing trouble and that be the end of it. I guess it will depend on audience reaction and if they can plausibly do it. I know it's a soap and you sometimes have to suspend your disbelief. I think that's what's going to have to happen this time.

So May also seems to have brought the disappearance of Stape who's pretending to be Colin. Fiz hasn't been wringing her hands and we've been spared her sighing at him every time he goes off to his ill-gotten job. You just know it's going to blow up in his face at some point. I hate how everyone keeps saying Stape is a good man really, just makes bad decisions. The man is a prize plonker! He lies, he's passive aggressive and manipulating, he's weak, he's selfish and he's utterly destroyed the sparky Fiz we know and love.

Gail in Jail has been interesting. She got sucked in by Tracy Barlow who is using her in her devious plans and it looks like she could be hung out to dry at the trial that starts in June. I don't know about you, but as we've not been told that Helen Worth is leaving Corrie, and add to that the fact that Gail really is innocent, it's probably a no brainer. Gail should be found not guilty, in my opinion as a lifetime soap watcher. The guilty get convicted, the innocent go free. That's the rule. I just hope Tracy gets what's coming to her for lying in court!

Underworld seems to be going ... er... under. And i'm not so sure it's not down to that smarmy prat Nick Tilsley. My God he's annoying. The factory roof is giving way with gushers of water streaming through. Never mind it's hardly rained in weeks. Nick's mind is on his mother's trial and he's off running around bribing witnesses with Underworld money and missing meetings. He keeps banging on about Trevor the binman messing up a deal but it's his own damn fault for missing the meeting isn't it? And he didn't keep his eye on the job and for the want of a little bow, the order was lost. I got news for him. It's only going to get worse!

Lloyd is running after a pole dancer and worried about what shirt he's wearing. She seems like a nice girl which probably means she's got secrets beyond having a little boy she didn't tell Lloyd about. Tony's back, and he's sent his newly released cellmate to go sniffing around Coronation Street. Informer perhaps? We'll know very soon.
Posted by Tvor at 10:08