Monday's episodes are why Corrie has lasted 50 years

I just have to jump in here and say how much I enjoyed Monday's double episodes of Corrie. In contrast to last week's gloom, doom, drama and pyrotechnics, Monday's episodes were filled with fun, weirdness and foreboding (but not in an impending pyrotechnics way). Mary's Star Wars get up and musing about not being allowed to watch those kinds of movies, or pretty much any movies from the sound of it, was just as far out there as the far, far away galaxy. Is it me, or is she getting weirder and weirder? It's almost as if by having her mother living in a home instead of under her roof, the relief of not having that obviously domineering life force under her feet has set her free, dizzyingly so. I don't understand how Norris seems to be friends with her again, even having her working in the Kabin after the whole kidnap debacle, but he was also not all that upset that Rita gave Tina her job back, displacing Mary who wasn't happy about it at all.

The factory is back up and running, in the old Joinery bar. It's bizarre, really. All the fixtures and fittings and empty bottles are still there on shelves and on the bar and the (rented?) machines are lined up in the middle with just desk lamps for light. Surely that isn't really good enough for close sewing work? Kirk is happily running around with bolts of fabric (and packing and shipping, assuming there's a rear delivery door as most restaurants do have that.) At least there is a fully equipped kitchen, not just a kettle and a sink and I suppose the girls could always have their tea break at the bar! Didn't Julie mention something about having a smoothie maker?

What did have that sense of foreboding for me was the increasingly clingy Natasha. Now she's lent Nick the deposit for the lease, money she'd been saving for their own place. Um. Really? She's going to be borrowing a page out of Mary's wedding book soon and we'll be seeing a meringue type dress on a hanger behind the door of the salon pretty soon. And Nick, it's so obvious, honey, he's just not that into you! He's going to let her down with a huge thump, she's going to crash and burn. Well, maybe not burn, we've already had our share of that this year. But it isn't going to be pretty. 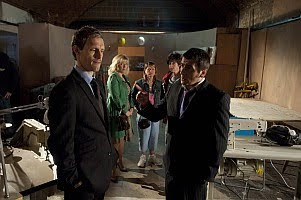 And Peter's jealousy just got inflamed well and truly. It seems like it came out of nowhere, doesn't it? Or is it just me? After everything that Leanne has gone through with Peter, you'd think he would have more trust in her. Why on earth would he think Leanne still has feelings for Nick after all these years? Mind you, Nick seems to quite enjoy winding up Peter. Nick is a smug git, isn't he? And for those of you that remember, he does seem to be his father's son. Brian was a smug, arrogant git, too.

I can understand Peter's feelings toward having anything resembling George anywhere near him and Simon but I don't think George will be back lurking on street corners trying to get a glimpse of Simon. I think George has an empty premises, an investment that isn't making him any money and this is a good chance to recoup. I'm sure they will rebuild Underworld once the insurance money comes in. A good chance to spruce up the old set.

It did strike me odd that Paul Stokes remarked that Nick had never let him down before but I thought this was a new Underworld contract? Nick came from Nottingham previously. Maybe Stokes is a contact and Nick had worked with him before when he lived there.

It was nice to see Tina and Gail making up and it's nice to see Tina smile, even if it was at Ciaran's daft flirting. Did he really ask her what her sign was? (Speed Dating, starring Graeme and probably Mary. That ought to be hysterical!) And so nice that Roy and Hayley are going to make it legal, finally! Again, Julie manages to put her daft foot into it wondering about Hayley's bits and pieces but she's daft as a brush anyway. Julie. Not so much Hayley. I would be very afraid, though, if I were Hayley, what with Mad Mary looming over her with her wedding planning advice.

Anyway, I quite enjoyed the Monday episodes. This is the kind of thing Corrie does so well. High drama and tragedy is good, but Corrie became famous for it's slices of everyday life like this!
Posted by Tvor at 10:25

I am with your take on Brian Tilsley. Never could stand him or Chris Quinten who played him. Both thought they were God's gift to women!

Not to mention a terrible actor. At least this Nick isn't bad in that department. I just hate the character.