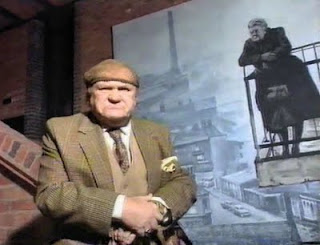 I was perusing the listings on one of the UK television download sites, I forget whether it was UKNova or TheBox, but there was a Classic Coronation Street show listed from January 1993. I thought it was a classic episode and went ahead and downloaded it. Most of the classic episodes that i've got this way are copied to digital format from a VHS tape so the quality is a bit spotty but most of them aren't too bad.

Anyway, imagine my surprise when this turned out to be a copy of a television special from that date, not an episode. It featured a lot of classic clips from the show, plus a couple of interviews as well. There was a feature on Ena Sharples as narrated by Les Dawson who donned a hairnet and mugged for the camera. Don't you think he looks just like Ena?? Ena was one of the most wonderful characters ever. They wrote such amazing dialogue for her and Vi Carson delivered it with a rhythm that just flowed with sublime timing.

They had both William Roache and Johnny Briggs on stage to talk about the Mike and Ken feud, which, at the time, was about to enter another phase. Ken had just discovered that his new lady, Maggie, was Mike's ex and the mother of his son, Mark. There were all the classic clips to this story that you've seen many times including several punch ups between the two men. 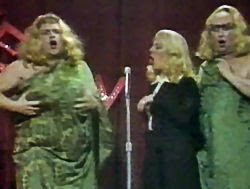 There was a medly of clips from a Street variety show which had this unlikely trio of performers. That's Eddie Yates on the left and Fred Gee on the right! We also saw Rita singing Lily Marlene as Marlene Deitrich, Bet, Norma and Betty as the Andrews Sisters and Uncle Albert reciting a poem about kissing a lass under the stairs!

There was a section of clips that viewers had written in requesting and i was tickled that one of my absolute favourites was included. You may or may not remember Boris, the Mexican mouse eating spider that Alec hoped would make him a pile of money. AT the same time, the kitchen was being renovated on orders by the Health Inspectors. The huge spider of course, escaped and turned up on the kitchen worktop at the same time the Inspector was...er... inspecting. I remember being in hysterics watching this big hairy spider delicately toeing it's way past the tomatoes! Alex cornered it between his hands behind his back before the inspector saw it and it was clear by the end and the spasms Alec was going through that he had to squash it. His face was green after the man left!!! Brilliant stuff!

Other requested clips included the one where Bet saw that Jack Duckworth had joined a video dating service as Vince St. Claire, Hilda, Stan and Eddie digging through heaps of rubbish looking for her accidentally discarded laundry and Albert and Minnie deciding not to marry after all.

Lots of clips of Ena of course, and of Annie Walker, ruler of the Rovers Return. This was the piece de resistence, however. The show ended with a short introduction and a few words with the actors that played Billy Walker and Annie Walker, Ken Farringdon and Doris Speed!!! Wow! YouTube clip of it is here. This was aired in January 1993 when she was about to turn 94, probably her last appearance, I'm guessing. She was dressed and fully made up and looked wonderful, even if a little frail. I think she may have been a bit deaf because the interviewer raised her voice a bit and Doris' answers weren't quite the answers to the questions but it was still fab to see this icon of Coronation Street one last time! 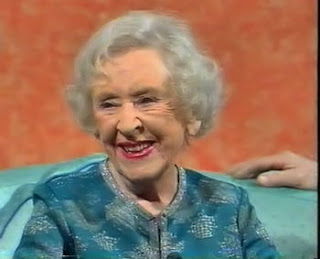 It is on TheBox: