State of the Street - August 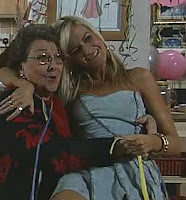 Another McDonald "wedding of the year" and at least the bride stayed sober and they got married. But, thanks to Slug and Hooch, Becky spent her wedding night in the nick. Much like Sunita did. And both of them are innocent and were/are set up. But the hen night was delightful, with Becky and Betty having a cuddle, with Anna and Hayley dancing to Two Frozen Peas and then some heartfelt moments between Becky and Steve out in the ginnel. Liz returned in the gawdiest outfit i've ever seen her wearing, that pink pantsuit, and then wore a Spanish Flamenco dress to the wedding. After it all fell apart, Liz really ripped into Becky, Becky ripped into Liz and Steve actually defended his wife and hollered at Liz for speaking those things to his wife. Has Steve finally grown up? The rest of the month was the quest to find Slug and prove Becky's innocence which of course, they will.

Now Liz is back to face Lloyd and there were some lovely scenes between the two when she bared her soul and confusion and he cried. It was one of the best scenes I've seen on Corrie and the actors really made it work, as I've said before. (Do you think he looks thinner?) And that's the plainest i've ever seen Liz in my life! Black tshirt, no cleavage, no makeup. After all the upheaval of the wedding, i still enjoyed seeing the McDonald clan back together for a short visit.

I really wondered how thick Gail's blinders are. She works in a health clinic, i'm sure over the years she's seen addicts come in for help, or come in to try to get drugs. Surely she'd know the signs. It took months for her to finally figure it out, when Joe broke into the clinic in desperation. Yes, he needs help. No, she's not so sure she can support him. It's no wonder. With everything she's been through over the years with men, it's any wonder she has any strength left to work this hard on a relationship. She doesn't expect it to be easy but i'm sure she didn't expect it to be like Atlas shouldering the world either. Mind you, spoilers say Joe's going to drown. I think Gail needs to seriously consider moving to the desert! And Gary had a mate whip the tar out of David so they're even. Will David ramp up the feud again or will he leave it alone? Is anyone else getting tired of him gazing bitterly at Jason and Tina who, I have to say, are being a bit insensitive snogging practically on David's doorstep every chance they get. Aside from that, though, I actually like them as a couple.

There's been some lovely scenes with Anna Windass and both Chesney and Fiz. Also, Anna at the Hen Party was loads of fun, too! I can't stand Eddie and Len is a waste of skin but I always liked Anna and i like her even more now. And since Gary is the one responsible for the beating on David, i may warm to him as well! (kidding!) I think they're going to make Gary a bit more of a sympathetic character. If they don't, he won't last long on the Street. And maybe with Anna's help, Fiz and Chesney can find their way back to each other but things went kind of quiet after the first week or two after Ches found out about the engagement. The wedding's in September. I'm crossing all my bits and pieces that it won't go through and we can get our sparky Fiz back again.

Maria and Tony are officially a couple and he's got his feet under her sheets, never mind the table and Michelle went ballistic. I can understand it in one way, it's quite quick for someone to find a new love of her life after her husband was killed but everyone is different. Now *we* all know she's cozying up to her husband's killer and she even thought that's what he was a few months ago but she changed her mind and nobody else knows except Carla and she's not around to tell. Yet. Carla's coming back soon and it's all going to kick off, but unfortunately it'll end with Maria's absence from the screen while the actress goes off to have her baby. I am guessing she'll retreat to Ireland or Cypress for a bit to lick her wounds.

Claire has another crusade, to organize a village fete and she got so involved in it that she failed to see that Josh had an allergic reaction to a bee sting. He'll be ok but the truth about the vasectomy will come out now and it'll all kick off again between the Pained Peacocks. Actually, I don't mind Claire but a lot of people seem to really dislike her or find her tedious and boring. I find there are similarities between her and Maxine, Ashley's first wife in that they are both determined and like a dog with a bone when they've got a goal or cause. Claire is just as stubborn as Maxine was. The difference is that Maxine was a bit of a dumb blonde where Claire isn't quite so much. (Dumb. She's definitely not blonde, obviously). Ok, Claire is a bit of a Moaning Mona, but i think she's very well suited to Ashley just the same. He's a bit of a Moaning Mona too!

Molly and Tyrone returned from holiday. Molly was supposed to have been topless tanning but she had tan lines anyway. Back to the dreary life of laundry and cooking. But does she think it would be any different if she married macho mechanic Kevin? She'd be washing his dirty coveralls and socks and grubby underpants just the same as she's doing with Ty's now. Sadly, that break didn't cool off the affair. It almost feels like Molly only went for Kevin because she found out he fancied her but when he decided to back off after the first shag, she didn't like that one little bit. It's only over if she says it's over and Tyrone is boring the bits off her. They celebrated their fun run with more exercise in bed. I wouldn't have thought they'd have had the energy! Have I mentioned that i really dislike this storyline? Thought so.

Who would have thought Emily was going to find a fancy man so late in life? But it was not to be. Ramsay got on the plane back to Oz and dropped dead. I blame Norris, you know and so does Emily. He really is a detestable little weasel. If he had relented even a little bit to Ramsay's olive branch, he'd have stayed around. However, we do discover that Ramsay had a brain tumour so it was only a matter of time anyway. Hmmm... this sounds familiar. Rita married Ted knowing he had a tumour and limited time. I suppose they couldn't go that same route with Emily. Some lovely scenes though, with Rita telling Emily that she helped make Ramsay's last few weeks happy and then Emily calling Norris every strong name she could think of. Of course *we* saw that Ramsay's death affected Norris more than he let on but he won't let anyone else see that.
Posted by Tvor at 21:00