Norris Cole, Flavour of the Month

Now, I've made no secret of the fact that I really don't like Norris Cole however, I do think his portrayer, Malcom Hebden, is superb! Over the last few years, it seemed like The Powers That Be (TPTB) have picked an actor and have featured them in storyline after storyline, good or bad. I don't know if that's because the actor's agent or publicist was very, very good or if the producers were cashing in on the popularity of the character or trying to make the character popular to bring in the punters. Perhaps a combination of all three! We've seen the characters of Michelle, Sean and Becky be spotlighted in recent days. All of them are young and likely to bring in their age group, which is what ITV wants. Bring them in young and maybe you'll keep them for life.

This year, though we have seen an awful lot of Becky, we've also seen a new trend and I like it a lot! The most recent character to receive a lot of focus is none other than Norris Cole! Think about it...competition madness leading to the storyline with Mary, then Ramsay, his long lost brother shows up. We're about to see Norris possibly become the new owner of the Kabin and ITV has announced that Mary Taylor is returning in the New Year! Two more Norris stories! For one of the more senior members of the cast to get so many front-burner storylines all in one year is unusual when you think back on Corrie over the last decade. They're lucky if they get one every few years! Yet this year, not only have we seen Norris in the forefront, we've also seen Ken Barlow, and Rita as well, in shiny storylines of their very own. You might say, "What about Emily?" She, too has had a good storyline but that's been part of Norris' which was the main focus of the long lost brother. 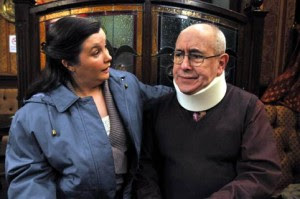 And that's the other good thing about featuring Norris. It also brings in other senior members into the forefront and that's never a bad thing *and* it's about flaming time! The older members of the cast have so much experience and so much talent and the younger actors can learn a lot from them.

Usually, when a storyline centres on an older person, they have their storyline and that's it for the rest of the year (or two!) and that seems to be the case with Ken Barlow and probably Jack Duckworth now he's going to be moving out of the street (while the actor is easing back on his workload). That's not going to change much but we can look forward to Blanche having a possible romance in the near future. That makes four romances in one year for four senior cast members! (Ken, Rita, Emily and now Blanche) That's got to be a first!

As much as Norris annoys the pants off me and gets right up my nose, I applaud Granada for bringing some focus back on the older generation. I get tired of seeing the under 30s all the time. One can only take so much of Rosie screeching and prancing and showing her cleavage all over the place. It gets tiresome to see David scowling and grimacing and skulking in corners. If I see Michelle flouncing around and sticking her new chest into scenes continually, i'm going to heave. Don't even get me started on all the fake tans and big shiny hoop earrings and pushup bras...and that's just Liz McDonald! ;) Just kidding, i love Liz!

Yes, we see a lot of Steve and Becky but I still love them. Always will like Gail Platt storylines because Helen Worth is an absolute star and I adore watching Sally's nose get higher and higher into the air.

That's beside the point, though. It seems like Norris Cole is this year's Corrie "Flavour of the Month" and that's actually not a bad thing on the whole.
Posted by Tvor at 09:25

The older cast members also seem better able to handle that magical mixture of humour and pathos which is Corrie at its best. A lot of the younger characters seem to be a bit one-dimensional, with their stories about playing up one aspect of their characters (David is scheming, Rosie is a bimbo, etc.); there's no growth or dimension there.

Very good point, Doris. It really seems like experience is the key. There aren't very many younger actors that have the chops to go the full range of emotions, and know when it's best to be ott, subtle, and the sense of timing for comedy is really a knack.