If you're a fan of Norris Cole you aren't going to like this. I have never liked the character of Norris. Ever. Not this time around and definitely not the last time around when he was first introduced, rescuing a stranded Derek from a motorway rest stop. He was obnoxious then and he's obnoxious now. He was even more obnoxious than Derek and that's saying something. He may have mistook Derek's name at first but surely he would have learned otherwise but he insisted on calling Derek "Dirk". Probably did it because it annoyed Derek so much, I figure. Now, granted, Derek was easy to wind up as Des Barnes had already figured out. Norris was also behind the gnome-napping which was probably the ultimate wind up ever!

I didn't like Norris, partly because of his looks. He physically repulsed me. I do apologize to Malcom Hebden for that, he can't help it, but his hairstyle and pursed lips and thick rimmed glasses just gave me the willies. To be fair, since he's now older and grayer, his looks have softened and he doesn't creep me out anymore. Norris was never meant to be likeable that first time around. He was arrogant, sneaky and annoying. There really wasn't anything about him that was remotely comical. He was a foil for Derek and Mavis.

When he returned, jobless, wifeless, a broken man, he was set up to be humbled. A mere shopkeeper after falling from the lofty heights of executive-dom looking down his nose at everyone else. They turned him into a gossipy, nosy "old woman" of a man. He may have a few funny lines or situations now and then but he's petty, picky, nasty, sarcastic, ungenerous, fussy, close minded, judgemental (oh boy, is he judgemental!) and gossipy (and not in a good way). He does have a soft side, he does respect and care greatly for Emily and Rita but that's the extent of it. I rarely find him or the situations he gets in funny though i did find the scene where Mary tries to seduce him and he scrambles out on all fours pretty funny.

But even then, he had a lovely woman who wanted him. He definitely gave her mixed signals when, if he wasn't interested, he should have made it clear from the start. His treatment of his half brother Ramsay has been appalling and atrocious. Carrying a grudge for 50 years, unreasonably so, is unfathomable. Ramsay might have given his birth mother a shock when he returned to find her (and it will become clear that she didn't want to find him either), but it didn't do her in. She didn't die for a year after that so the responsibility can hardly be put at Ramsay's door. Yet, Norris has put the blame squarely on his brother. Ramsay has been trying and trying to appease, suck up and make up for it all but Norris is having none of it. 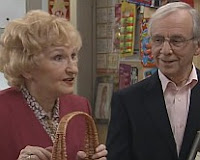 He's only pleased because Ramsay is leaving but it's going to turn to dust when Ramsay dies suddenly. Will Norris have any regrets? I certainly hope so because he's almost unredeemable after all this bullying. He's also ruined Emily's chances and maybe that's been part of his reasoning. If Ramsay takes "his" place in Emily's life, he'll have to leave Number 3. I think he might have relented and warmed up to his brother if there hadn't been a spark with Emily there. It's not that Norris fancies Em, because he doesn't, but he's very protective of her. I bet he was the same with his mother and resented any intrusions such as long lost sons showing up on her doorstep and threatening to push him out of the way then, too!

edited: I must add, as i meant to in the first place, that i find no fault with Malcom Hebden's portrayal. He's an excellent actor with superb comic timing. He does Norris justice but I just don't like the character.

My ... you really don't like him do you? I think there are many characters that irritate me more than poor old Norris, such as the Platts, the Websters (Sally's OK in fairness) and Emily.

Corrie needs to keep a hold of the good actors, which they seem to continually spit out for one reason or another. I hear Tony Gordon (Grey) is about to go finally as well. Good actor, but where could the character go - after all, he is a murderer!

The Kevin and Molly affair is a joke. I hope Jack or Pam get wind of it and quosh it once and for all.

I should clarify that i think Malcom Hebden is a top actor and he really does a good job with Norris. I just don't like the character.

Many of the actors do leave of their own accord. the ones that don't, sometimes are only meant to be short term and it's usually the ones that aren't very good or whose character just hasn't caught on that are let go for "storyline purposes"

Malcolm Hebden is just a top, top bloke. So funny and so friendly. I think he does a great job with what is, yes, a very annoying character... (It's always more fun to play the non-goodie-goodie!)