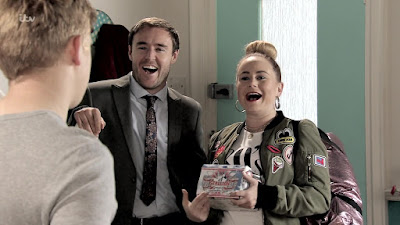 Chesney and Sinead's wedding day dawns. Suits are waiting. Soaps are wrapped and decorated as favours. Chesney looks like he's facing the firing squad. But Tyrone and Gemma's ear-bashing rendition of Get Me To the Church On Time manages to raise a smile on our earnest ginger groom. They've brought beer, Chesney has sausage. What more could you want to start your special day!? 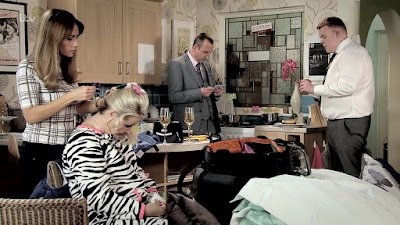 Over the road, Kirk is practicing his speech, determining that a nephew is closer than a brother but in any case, it's true. Kirk and Chesney have been very close. Sinead finally arises from her beauty sleep and she's glowing. It's mentioned that Dev has paid for the food, all very appreciated. A nervous Kirk decides to go to see Chesney. 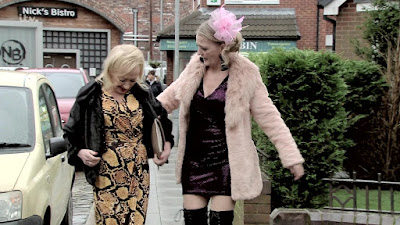 Sinead's Mom and Nan have arrived, both of them dressed completely inappropriately. I love it! Her family, the few times we've seen them, are so over the top that characters like Cilla, or even Liz in her heyday, look like nuns! 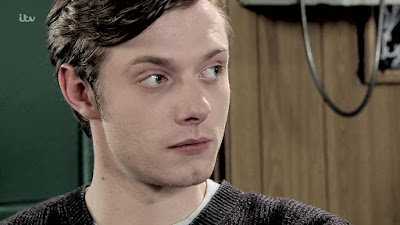 Tracy is doing the flowers. She makes sure Daniel gets the full meal deal of wedding and loved up couple talk but he says, glumly, he's very happy for her. Carla comes along and exchanges a few words on the nightmare that is Tracy. Simon ambles along as well and he tries the dinner money scam on her but she sees right through it and sends him on his way.

When next we see Kirk, he's in the ginnel and later in the house practicing the speech. He's at the part where he's talking about Chesney's career. His jokes don't seem to be too obvious. Oh dear.

Carla offers to take Daniel for a cup of tea and when she does, he wants to know what women want in men. Her answer ends up being a lot of contradictions and that's pretty much right. He asks if she wants Peter back but she's emphatic. No. And that's not "No" as in "she protests too much". That's "No, that ship has sailed". She's encouraging him to give it one last shot to convince Sinead to marry him instead. 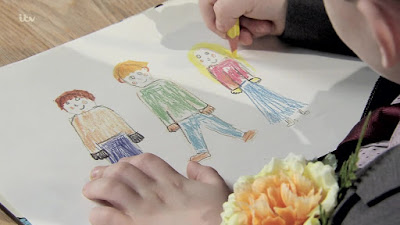 Gemma has Henry in tow and they are watching Joseph draw a picture of his new family. He calls Sinead his new Mum which makes Chesney uncomfortable. Tyrone tells him he's getting married in a hour so he better get used to it. Henry puts his foot in it making a remark about Joseph's mother and is very embarassed when told by the lad that his mother is dead. Ooops.

Gemma follows Henry outside to the car and his response to her seems a bit off, telling her he thinks she looks great, especially if she was covered in grease (the kebab shop reference). Across the road, Tim has a decorated cab for the bridal party. Sinead's mother gets a grope at Tim's backside before taking her mother to their car. 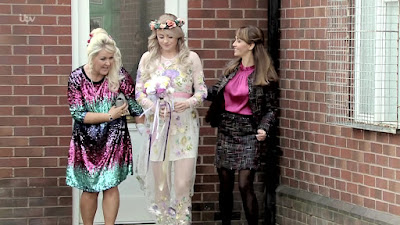 The bride emerges and her dress is very much in Sinead's style, with a short underdress and a floral sheer mid-calf length overdress, flowers in her hair. Beth is dressed in sparkly hot pinks, purples and greens with bright bows in her hair. A few other guests gather round. Sally and Sophie have handmade fascinators courtesy of Gina and I think they look just fine. Others call over their best wishes. 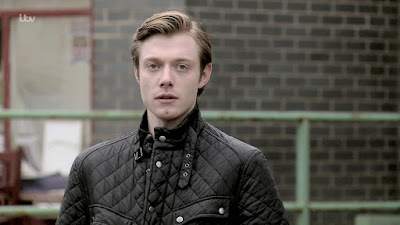 Just before she gets in the cab, she sees Daniel on the corner looking longingly at her. Chesney spies this exchange from an upstairs window. Daniel heads back towards the ginnel as Tyrone and Kirk call for Chesney to hurry up. Daniel calls Robert and leaves a message to say he's feeling sick and can't come in to work. 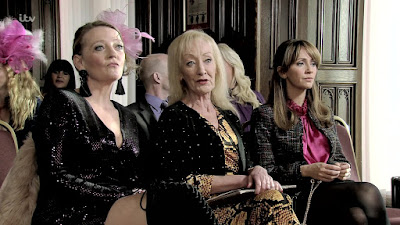 At the registry office, Sinead's mother reminisces about Jason. Her nan makes a less than complimentary remark about Kirk, much to Maria's annoyance. Roy, Cathy and Brian are sitting together talking about their favourite buildings in Weatherfield. Gina's fascinator must be meant to outshine Sally's but it's rather like a pink explosion on her head! The male half of the wedding party is practically pacing, waiting for the bride. Kirk panics because he thinks he lost the rings but they're only in another pocket.

The bridal party arrives and Sinead makes her way into the room with Beth, pretty much holding Beth up. That bubbly wine earlier went down far too well! Sally whispers to Sinead as she passes by to ask where Tim is and is told he's parking the car. Now I don't believe for a minute Sally would make such a faux pas. 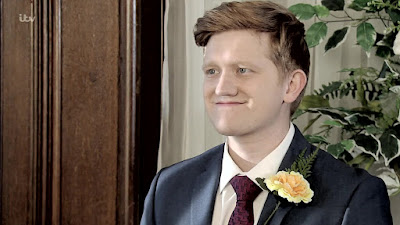 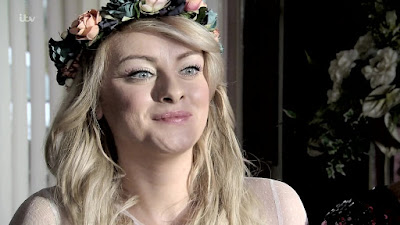 The bride and groom are in front of the Registrar and the bride looks particularly happy. 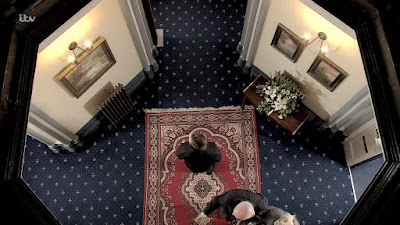 But outside, Daniel rushes into the building and approaches the room where the wedding is about to start. Will he or won't he? While we wait to find out, Gemma has go at Henry for yet another sarky comment. Then the door opens but it's a late arriving Craig. Daniel is still out in the entry way looking sad and deep in thought. He walks away. 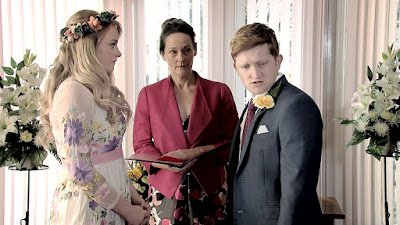 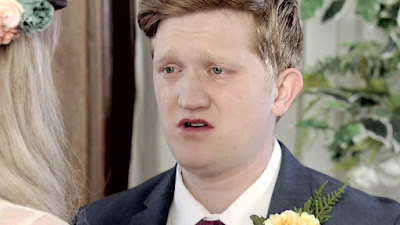 Rings are exchanged. Sinead sincerely pledges her everlasting love. But when Chesney is ready to be-ring her finger, he looks nervous, edgy. He starts his vows emotionally. He has to be prompted by the Registrar but we're not sure he's going to get through it. He backs down. He uses Joseph as an excuse, saying they've rushed it and the lad isn't ready. He tells her he doesn't think they should do this!! 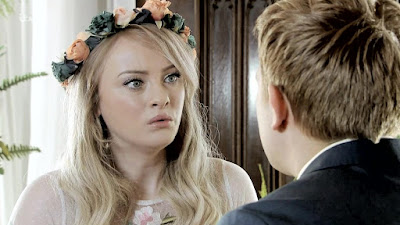 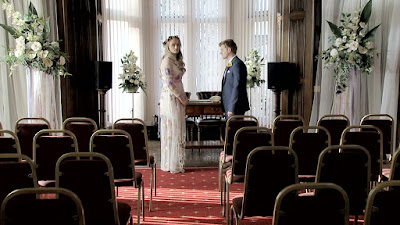 The room is empty next time we see it. Gemma pops her head in to tell them they have to be out soon for the next wedding along. Sinead gives Chesney a load of grief and he tells her he couldn't tell her before then because he hadn't worked it out. Worked out that she'll eventually leave him just like everybody else. Great timing, mate. Humiliating her out of self pity? It comes out though. He saw how she looked at Daniel that very morning. But she assures him she would have married Daniel if that's who she wanted. It isn't. Chesney still thinks it's too much of a risk that they'll break up and it'll be detrimental to Joseph. She's feeling betrayed and well she should. He didn't have the faith in her that he should have.

The guests have convened back at the pub anyway, bringing the news. Carla's there and Toyah hovers over the wedding food, not wanting Carla to have any as she wasn't a guest. Maria asks David to try to find out how Bethany feels about Craig. Gemma accuses Henry of causing the wedding fiasco by his comments making her stressed which Chesney picked up. She ends up dumping Henry. A bit of a stretch. Dev thinks Chesney just lost his nerve. Dev wonders if he can get reimbursed for some of the food even though it's already been paid for and people are eating it. 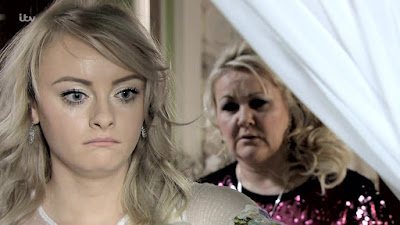 Sinead, Beth and Kirk have returned to Maria's flat. Sinead is gutted, looking down over at the Rovers where she should be now, celebrating. Kirk is happy, at least, he doesn't have to do his speech. Beth shoots him a very killing look over her shoulder while Sinead sobs in her Auntie's arms.

Chesney and Tyrone are picking the meat off the bones of the wedding. Chesney admits he's still mad about Sinead. He's convinced she'd leave him eventually and he could have lived with it if it weren't for Joseph. Tyrone tells him he should have had more faith. Chesney says he won't regret his decision. But Roy arrives. Good old Roy. More of a dad to Chesney than he ever had with any of Cilla's many men. 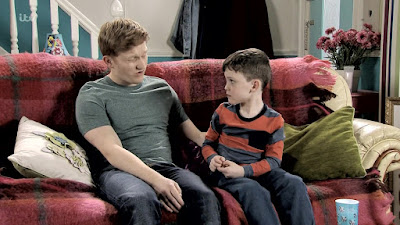 At the end of the day, it's just Chesney and Joseph.

And here are a few more photos of the fashions of the day, particularly Gina's fascinators! 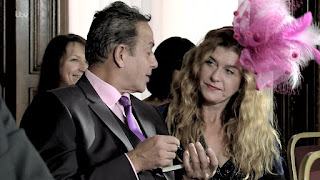 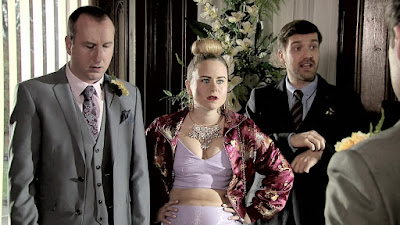