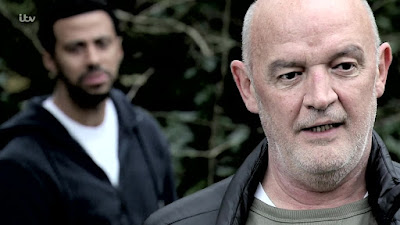 Luke is dead at the hands of Pat Phelan because you know, once you've killed, it's not  quite so difficult to kill again. It was a bit of a gruesome death, though, burned alive in an exploding car. What I wondered was...what was Pat's plan previous to that where he got Seb's fingerprints on the gun? Was he going to set up Seb for the death of Andy and Vinny should the bodies surface? The big hole there is that Seb wouldn't have any motiviation. He didn't even know them. Did Phelan check to see where Seb actually was on the night they were killed? The bodies have been in the water awhile, I don't know if they could with any certainty know the exact day they were killed. And now that Pat used the gun himself, the prints will have been worn off by the gloves her was wearing. 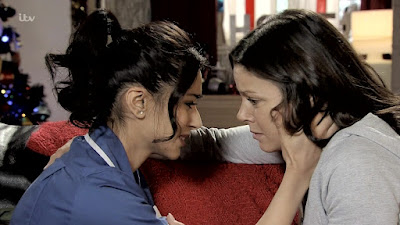 Let's move over to Rana who was frantically trying to get hold of Luke all day. We know his battery died but the voice messages would still be saved on the phone company's system. Luke thought Rana was pregnant but she's now lied to Zeedan and brushed off Luke's remarks as having got the wrong end of the stick. She was terrified that Luke would tell Zeedan that he was told directly that Rana was pregnant. He can't tell anyone anything now but the voice mail messages might raise some interesting questions.

Are the bodies about to resurface? Whose shoe popped up coincidentally when Phelan was at the pond? That was a bit contrived.

Rana's brother, Imran, is now in the show. We haven't seen much of him yet but so far I think I kind of like him. Charming but not too cheeky and annoying or arrogant. A good foil for Adam who thinks very much of himself. Is he an actual solicitor or is he a paralegal like Todd? He's newly single, as well. My guess is Maria. She is usually the first one a single man sleeps with before he settles down with someone else, isn't she? Wouldn't it be nice to see him take a shine to Izzy? 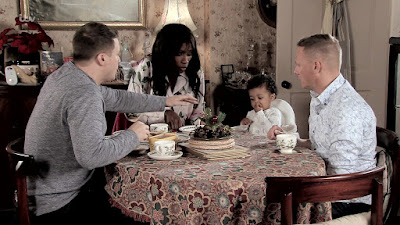 Jude and Angie are still around, I see, and not found a home of their own yet. When ITV opens up the set to new streets or parts thereof, I am guessing that's where their home will be. Poor Sean ends up losing both of his jobs though neither was due to Jude and Angie. But if you go blabbing about a patient's personal health in public like he did while talking to Eileen, it was right that someone report him. It's down to him that he chose to quit because Dr. Gaddas was only going to give him a warning. He also lost his lodgings so he does what a lot of people have been doing lately, turn up on the doorstep of Number 9. I guess all these guests are putting that loft conversion to good use. Poor kids still don't have a place to play but the lodgers have a place to crash. Or so it seems.

Peter sacking Sean seemed a bit abrupt but I don't think Peter was ever comfortable with Sean behind the bar. He knew that Sean was Team Liz and probably felt that Sean would rather be working for the McDonalds. Sometimes you gain staff with a business that you kind of have to keep but they'd be the first ones you'd replace if you had the opportunity. I wonder if Peter will take him back?

Daniel turned on the self sacrifice to push Sinead away. It's clear he still loves her but he ended up telling her he never loved her. The wedding is coming up soon. The thing is, I do think Sinead is better off with Chesney, they have much more in common. They do make for a deadly ordinary couple but Sinead and Daniel never did click for me, either.

I've never liked Michelle, but this week she surpassed my low expectations for her. How on earth would she believe that Steve missed paying her 10K in the divorce settlement? I reckon she probably knows down deep that he is making excuses and she has no guilt taking his hard earned money but she also had no guilt robbing the Bistro and defrauding the insurance company with rigged and untrue claims on how much was in the till. If she's wiling to do that, she certainly has crossed that line; it's only a matter of time.

It seems wrong seeing Tracy and Steve looking all loved up. It has to go wrong, it always does. I'm with Amy, the pair of them are toxic to each other. Most of the time they have known each other since Amy was conceived they've hated each other. There was only one brief moment that they were a real couple and that's only because she got pregnant with twins. Then she ruined it all by losing the babies and lied that Becky pushed her down the stairs. It feels like they've put them together because they don't know what else to do with them. Both Steve and Tracy are settling for each other rather than be alone.

Carla's back and I'm thrilled but since she needs a kidney transplant, likely from a family member, I have a bad feeling. Johnny could never be a donor because of his MS diagnosis but there are enough Connors to pick from. Someone's going to be a match and there's always a possibility that someone will die and be a donor that way. That person may or may not be a family member. In the meantime, the burning question on everyone's lips is ... who will they pair Carla with? Will they split up Peter and Toyah? Carla had more chemistry in one scene with Peter than Toyah has, that was evident. Toyah knew it, too. Should they put Peter and Carla back together? Probably not.

It's a pity we've lost Bruno Langley. That really put a ragged rip in the storyline fabric that is going to be difficult and awkward to set right. I hope Summer comes back and I hope Billy doesn't lose her to that awful Geraldine. 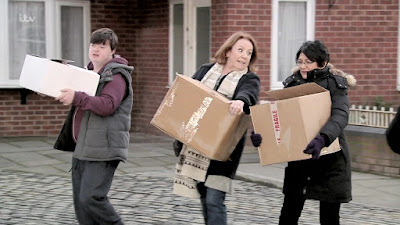 And finally, Brian and Cathy are moving into number 12, the flat he used to own with Julie. When Brian left the show, there was talk about Julie buying his half and she couldn't afford to. It seemed to be a dropped subject after that and we don't know  that the flat was sold or not. It's been empty for a couple of years. Now Brian has the key and he's moving into it. Has he had the key all along? there has been no word that he re-purchased it or contacted the new owner so I must assume he still owns it or a share of it. And if that's the case, why on earth was he blagging a place to stay with Norris and later, Roy? For the comedy value? Because I can tell you there wasn't any of that for me. Inquiring minds want to know why the continuity elves missed this one.

Not only will Seb's prints be smudged by gloves but he used leather gloves this time. I hope the writers have done this on purpose because leather leaves prints that are unique to that glove, this could be a unexpected twist. Pat thinks he has avoided leaving a trace but has done so!

I am sure Sean is losing his jobs simply so he can go and do some skating for a while and the factory will presumably eventually re-open.

The story I am missing is the buyer who chose between the ex-gym and the ex-garage (I forget which he bought - was it the gym?). Neither have re-appeared in use yet.

I assume No 12 was occupied by an unknown, invisible tenant who has departed and so Brian is paying Julie some rent on her half.

I know that Lucy Fallon can act - but does she really deserve another major story quite so soon?

And can both Chesney and Sinead be given partners who actually make them both happy and positive characters please?