Blog fail award: Me for forgetting to do January's State of the Street and I'm late with this one! I'll try to combine the major points in with February. 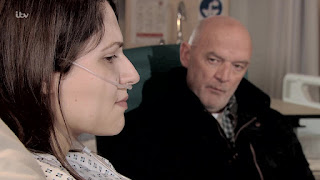 Didn't I say that Phelan would reach out and we'd have another body lurking around?  This time, a lovely, gentle man, Luke, got on the trail of where his mate Andy is after  the post has been piling up for months. Not really a lot to be going on with but they needed an excuse to put Luke in Phelan's path.It was a well kept secret for a change and a young actor like this one will do well. I liked him quite a bit. It's too bad none of the women they paired him with were all that interesting as far as "match made in heaven". First, Maria and then Alya. Luke would have been a much better partner for someone like Rana rather than Zeedan.

By the end of February, Phelan's alarm bells are ringing loudly and he suspects Gary is up to something. Then he discovered Seb in Nicola's flat and realizes she's betrayed him. She doesn't believe him anymore. He won't hurt her but he did throw her out (she was staying there after a hospital visit). He's isolating Eileen, trying to keep her from her friends, all of whom keep a dim view of him. She doesn't understand and has already fallen out with Liz over it. Then, at the Mill development site, things are looking to go very badly because the little lake there has to be drained and we all know there are two dead bodies in it. Phelan could play innocent but once they're identified, one being his former tennant and one his former business partner who allegedly scammed him for a lot of money, he'd be front and center in a murder investigation and so he should be!

It's the beginning of the end for Pat Phelan. Some viewers think this has gone on too long but I think it's been great. Some of these villains need a long game to get to the inevitable end or it will feel too rushed. Sometimes, aspects of it are a bit too contrived, I admit that but overall, it's been great and Connor McIntyre has been absolutely superb. 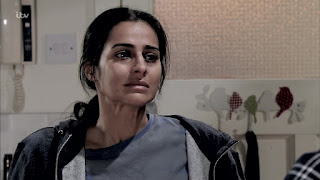 Luke Britton, we miss you. Not in the way Alya does, with what was left of her life's blood draining out daily, just... it's a rotten shame he went so young and horribly. I never bought into Alya and Luke as a couple and certainly not "love's young dream". I do believe you can meet the love of your life but I don't necessarily believe you would know it within 5 or 6 months of dating  someone in that early flush of lust. And since it appears Luke never did introduce Alya to his parents, clearly he was not that into her but has she taken that on board? No. She just hoped she wasn't seen as rude to miss the burial and wake when Mr. and Mrs. B. had no clue who she was in the first place. 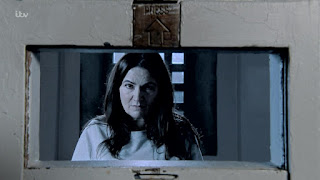 Anna's trial went pretty much as expected. In the majority of trials, the person arrested and jailed is never the guilty party and even then, they are often convicted, with new evidence revealing the real guilty party later. However, when you know that an actor is leaving the show, all bets are off. This was a trial for pushing Seb off the ladder and we know she didn't do that. But she is also up on charges for assaulting Eileen (when she thought it was Phelan coming up the steps to the builder's office) and she'll get time for that because she's guilty of that charge.

What I'd really like to see is Anna vindicated and released and then deciding to move away with Faye somewhere. Otherwise, you have Anna in prison with a release date somewhere down the road. Now, does she come back to Weatherfield where, all things being equal, her daughter still lives? But chances are that Faye won't be there anymore as there really isn't much to keep her there other than Tim. Maybe she'll stay with Tim's father and Tim can come back to town with Sally. That will give Anna a place to go on release. 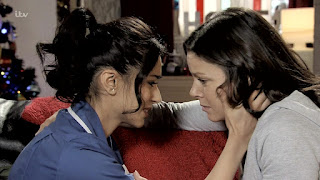 Rana and Kate?  I still don't buy them as a couple. I always thought Kate and Sophie would have been better. Kate could bring some fun into Sophie's life finally and at the moment, they are dating but there's still that draw between Kate and Rana. Poor Rana, though, more or less forced into staying with Zeedan for a year while they build a business financed by her father, just for the sake of putting on a front. That won't last long, I am pretty sure. At this point, I don't think Zeedan will end up with a cafe either. There has been publicity that a British coffee chain, Costa, will have it's name bandied about Weatherfield which means that's already going to be a drain on Roy's business. I can't imagine there would be another cafe, albeit with a different sort of cuisine, opening up nearby. 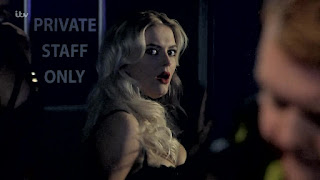 Bethany as a lap dancer really falls flat for me. When she first worked there, it didn't seem that sleazy at all, certainly not true to reality but during her next stint, she got a bigger reality check with a less sympathetic owner and a lower class of customer. Probably just as glad to get sacked out of that one. I think she needs a bit more counselling!

All this baby business with Eva just makes me hold my head in my hands and sigh. 17 weeks pregnant when she finds out, and ok, not everyone has the most obvious signs and signals. Toyah's surrogate had a miscarriage which must have been nasty because she must have been fairly fair into her pregnancy, too. Secrets and Lies. Toyah hasn't been able to tell Peter and now she's apparently going to raise Eva's baby as the surrogate's and not tell Peter about that, either. It's really going to bite her in the bum and probably throw Peter in a direct path of a bottle of whiskey. Here we go again unless he can manage not to drink. 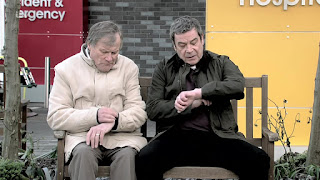 Carla's duff kidneys were seen to, with Aidan having the operation. During her earlier stay, she had herself seen to with Daniel Osbourne doing the deedl ; Some lovely scenes between Johnny and Roy working out how to share Carla's affections. Carla is bonding with Johnny but Roy knows her better and there's a much stronger bond there as Carla and Johnny are still getting to know each other. I'm suspicious, though, there's something going on with Aidan. He was emotional after the surgery and he's been distant ever since. '

Carla had more than her kidney seen to by young Daniel Osbourne who capably  took the reins. That was one of the oddest couples on Corrie yet.And it feels like Daniel isn't far from an all out crush on her with Peter grimacing from across the bar, jealous in spite of himself. And Daniel? I'm sure he thought all his birthdays came at once but out of this little friendship came a reunion with the woman he really wants, Sinead because it was clear that's what Carla could sense and she pushed them together. 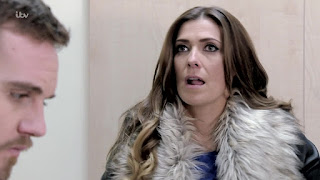 And then there's that story that everyone both assumed ITV forgot and wished the viewers did too and the story that the viewers criticized ITV for not remembering even though it was the worst retcon ever. It's back. I guess ITV gave up trying to make everyone forget that Michelle's son Ryan isn't biologically hers and her bio son Alex is still out there somewhere. He's pitched up as a trainee doctor at  the medical center just a few meters from where his mother lived. He may have assumed his mother could have moved away but I very much doubt it. I reckon he has been secretly tracking her all these years during which neither of them have made much effort to keep in contact. Curiosity, on his part. Now he's back, Michelle would like to have some sort of relationship with him but he's not supposed to be in the show long so I'm predicting once he leaves, there will be a reconciliation and then he'll sink back into the cupboard and we won't hear about him yet again. 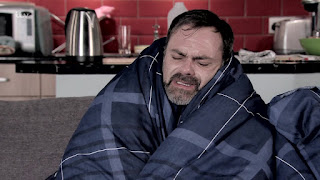