The face of an assailant 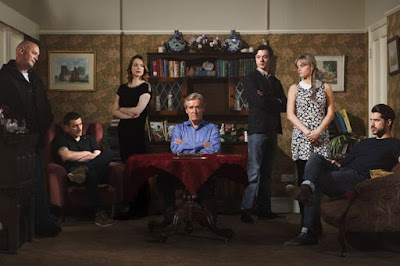 When the "Who Attacked Ken" storyline spoilers first hit t'interweb, ITV's publicity machine offered a photo of all the potential suspects including a non-family member, Pat Phelan. They do this. Then, quite often, they throw a twist in the works and the culprit ends up being someone entirely different and "expendable", a secondary character. I really thought that's where this was going and I suspected either young Seb, perhaps caught in the act of robbing Number 1 or Chloe, hoping to set Peter up for it.

In an unusual twist, the identity of the attacker is indeed in the above photo. As the inept DS McKinnon arrested or seriously questioned one after another until she'd hit on every one unsuccessfully, the airwaves were full of red herrings, clues and hints. Amy? No, Amy wouldn't have hurt her grandfather even if she was angry with him. She couldn't have done it and gone on as if nothing had happened after. Pat Phelan certainly had form for it but it wasn't him, either. Amy directed the police to Adam whose fingerprints were on a kitchen worktop while he was supposed to be out of town. Daniel has often shown a sudden and violent temper. Tracy was upset because she felt Ken showed preferred treatment to her blood relatives, which she is not. Everyone had a motive. Everyone had opportunity, or so it seemed.

Little by little, alibis were given and some were proven, some were not. By the end, Daniel's alibi, proven with a tram ticket, was in tatters and the identification of a pair of red trainers as his seemed to have sealed his fate in Ken's memory. But Ken still only remembers the shoes, not the face.

Then Adam decided that he'd leave town after a dressing down by Peter and Tracy. Adam previously pretended to leave town when Ken ordered him out. He'd hit rock bottom and had no other option but he didn't actually leave. I didn't believe he'd have upped sticks and gone so quietly after Peter and Tracy's suggestion. I had been coming to the conclusion over recent weeks that he was the attacker all along, because Adam has been far too focussed on trying to move the attention away from himself, trying to find reasons to pin the blame on anyone else. When one person was cleared by the police, he'd move on to the next and so on. There wasn't any more evidence against him than there was with anyone else, just enough to be circumstantial but nothing really definitive while Ken still had no memory but Adam was determined he wasn't going to go down for it. Why? Because he's guilty, that's why. Or so I thought. 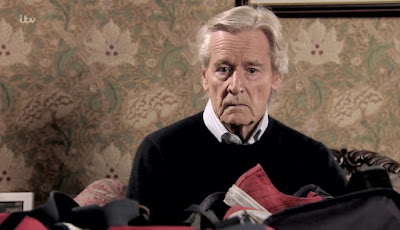 Ah. But Ken's starting to have memory flashes. Was Adam so quick to leave town to escape the inevitable? That's what I thought. Tonight, it seemed Adam signed his own arrest warrant inadvertently. Ken had recognized those shoes and Sinead identified them as Daniel's but she thought he meant the heap of clothes next to the shoes. Ken only said "who owns that stuff?", not "who owns those trainers?". Adam came to say good bye and right on top of his things in an open duffel bag were the shoes in question.  Oh heck. It was Adam! Ken even called the police on him though Adam is insisting it wasn't him though admits he was there but was too angry at his grandfather to call for help when he found him at the bottom of the stairs.

But Daniel was planning to go off as well. In a very contrived situation, his ex-landlord has waited almost 6 months to insist on a paint job at his old flat which you would think he would have rented out to someone else rather than lose that money for that long. But no. Swallow that one and move on. Daniel is persuaded to bring Ken with him which he did try to avoid but couldn't and Ken offered to help him revise for a poetry exam, using that big book he gave him awhile back, the one he wrote a message in.  You remember, the message had a phrase that Ken used to Sinead who repeated it to Daniel. He realized it was Ken that was the reason why Sinead felt she had to go through with the abortion and he was livid. Remember that sudden, violent temper he's got? 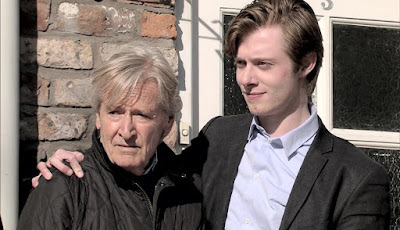 This, then, is the face of Ken's attacker. 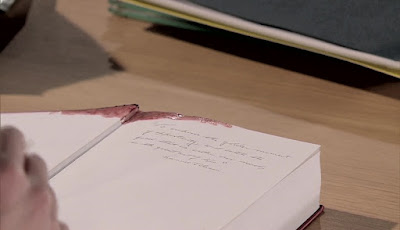 And this, then, as we later discovered, is the blunt object used to thump Ken on the back of the head, still bloody. Daniel had to buy another copy and forge the note and now the two of them are in an empty flat alone together. Ken still hasn't remembered the actual incident but as Brian found out, sometimes memories can flash back to you when you least expect them. It's very likely going to happen next week.

And once Ken remembers, since it isn't a murder charge, Daniel's fate isn't a done deal. I think that since it isn't that sort of crime, Ken can refuse to press charges if he wants and it's possible he might do that. He's been aware that his own interference has caused his son's anger towards him, and he's long felt guilty about abandoning Daniel who probably holds old resentment. But I expect, since Ken was willing to call the police on Adam, he'll do it on Daniel as well. Will Ken withdraw the charges in the long run? Wait and we'll see, I guess.


I enjoyed this storyline. It kept me guessing and I'm glad ITV didn't take the usual safe route of landing us with a secondary character that we don't care for as the villain of the piece though if it had been a murder case, I have no doubt that's what would have happened.

I wonder where they'll take Daniel now. Will he be humbled by his father's (anticipated) forgiveness? Will he become the family pariah? Will Tracy be insufferably smug because there's someone else to take the heat off her criminal past? Will we ever find out what happened to Daniel's mother?  What do you think?