The Strength of Mary Taylor 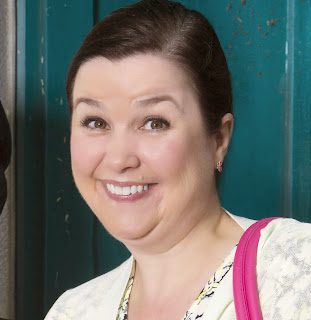 We keep losing strong women on Corrie and there aren't may left. As noted here, the writers and producer don't seem to be able to write for the stronger, more mature woman anymore where these characters used to be the life's blood of The Street. Most of the current women that might be considered in this category are either much older, like Audrey and Rita (Oh, Emily, wherefore art thou?) or they've been portrayed as harpies or idiots (Anna, Gail).

Liz still has it in her, though she's not been the forefront of a storyline much lately. She certainly stood up in support of Steve during the Ruairi and subsequent revelations about Oliver storylines but they aren't her stories. The last time Liz was forefront in a storyline that showcased her vulnerability and strength was when Tony Stewart schemed to get the pub from her with Tracy. Her ultimate revenge might have been a bit extreme but it was quite satisfying to watch.

May I suggest another woman that has a lot more strength than we give her credit for? She's a bit younger than the "mature" traditional Corrie strong woman and her strength is often disguised under a quirky, even a bit bizarre shadow. I give you Mary Taylor. Yes, really.

Now that she's past that phase where she was on the edge of becoming a bit of a psycho/maniac, she's back to the quirky, cheery character she was when she first came to Coronation Street. She is in her mid to late forties, never married. She's been burdened with the care of a mother who by all accounts is a dominant tyrant and yet Mary has been able to live independently and has carved a life for herself outside that woman's demands most of the time. There have often been vague references to potential matricide, but so far, Mary's mother continues to exist. And considering the role she played in the birth of Mary's son, Jude, forcing Mary to give the baby away, it's surprising that she is still in this world!

We've heard a lot of stories from Mary about all the strange and wonderful things she's done. The travels, the weird relatives and former friends, the regrets, but through it all we've seen her as a fiercely loyal friend who yearns to be loved, to have a family of her own. Before we knew about Jude, it looked as if she found that with Dev Alahan's children after their mother died. She has been an excellent nanny, being tough yet fair to the children and she's gained their respect and love in return. 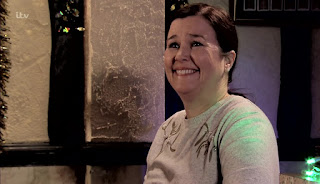 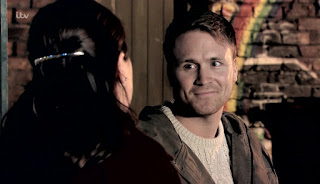 We've discovered that she was abused as a teen by a relative and gave birth to a son that her mother made her give up because, what would the neighbours think? When she found her son again after 30+ years and discovered that he was pleased to meet her and that she had a grandchild, it seemed like her heart would burst for joy. Even if she found she couldn't move away from home and her friends to live in South Africa, she surely has been keeping in touch. In this day and age, communication is so easy and convenient. Spoilers say Jude is going to move back to Weatherfield and Mary will have her family close at hand and I couldn't be happier for her.

Mary is a very loyal friend and will defend her friends fiercely.  Most of her friends are much older than she: Norris, Rita, Roy. It's odd to think she's a peer of such characters as Steve, Michelle, Tracy, on the younger side of her, and Sally, Tim, Anna, Kevin and Eileen who are a little older. She's an old soul and all her life, she never really fit in with people around her own age. 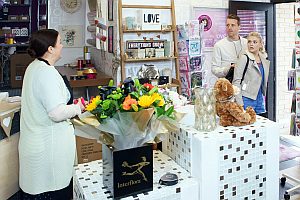 But she and Tracy, who is only a little younger than her,  have made an unlikely connection and seeing them recently in the shop hug joyfully after Tracy found out she'd be able to buy the florist's was heart warming. Strange, but heartwarming. Tracy is not normally a huggy, emotional person even if Mary is!

I also found myself touched when Bethany found refuge in the flower shop and Mary offered support, as if she almost knew what Bethany was going through. She didn't say so directly, but since her teenage years were tainted with the shadow of abuse, she does have an understanding and I think she was trying to convey that without frightening Bethany off. Maybe we'll see Mary be a support for Bethany once all this is over and be someone that can help Bethany get her life back on track with some encouragement from someone that isn't a direct family member hovering and fussing over her.

Mary also had her heart broken after the doomed relationship with Brandon. It seemed strange that Mary would start an affair with a married man but on a soap, that temptation happens to the best of them. The heart often over rides the logic chip in the brain and Mary wanted so much to be loved that she succumbed to the silver tongue of a skilled liar. When she was let down, she wallowed but with a little boost from Erica, Mary was able to pick herself up, put on her lippy and march on in the grand tradition of Corrie women, having learned a hard lesson.

Yes, I think Mary, for all her quirkiness, strangeness and off the wall attitude, is one of Coronation Street's strong women and Patti Clare is a treasure!