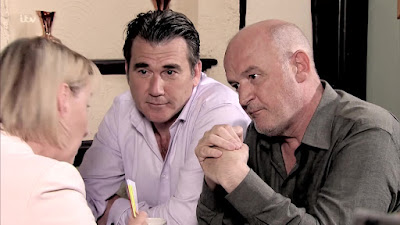 Vinny came to Phelan with a scam, pretend to sell luxury flats to naive punters, run off with the deposit money and they're quids in. Phelan snapped his hand off at the chance. But things are not going according to plan. Todd has been keeping a close eye on Phelan, not trusting him an inch and is now on the sales team. He's supposed to be on board and willing to go along with the scam but I'm not buying it. I think Todd is planning to find a way to bring Phelan down from the inside and thus remove him from his mother's and brother's lives. Todd isn't exactly twirling his moustache and looking shifty but he has been caught looking thoughtful after various encounters.

Eileen has gotten involved on behalf of Jason, eager to be part of the exciting project that she believes is real but she's been inadvertently putting expensive roadblocks in the way and Vinny's not happy about it, not one little bit. Phelan has impressed on Todd that you do not want to piss Vinny off, he's connected to some dangerous people. I think Phelan discovered just how real Vinny's connections might be and it has given him pause for thought.

I think Phelan is happy to rip off his neighbours and any other person quick to fall for the ruse but while he's a bully, and he's manipulative and he likes to threaten people, I don't think he's got the stomach for *real* violence unless he was defending himself.

Think back. Gary beat the living crap out of him. Did he jump Gary and catch him unawares, with revenge in kind? No he did not. He got back at Gary by using his mother, blackmailing her into sleeping with him so he'd let Gary off the hook. He used the people he knew he could rather than go physically up against a younger man who already proved he could fight back hard. He also hesitated when Kevin gave him a blunt warning not to mess with Anna when he tried to intimidate her and I think he knows Kevin isn't afraid of a fight, either. Again, he tried to blackmail Anna to back away from slagging him off to everyone or he'd tell Kevin about their previous encounter. Bully tactics, right? 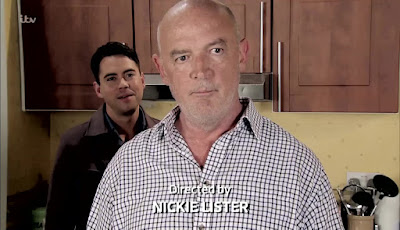 He's sly and so is Todd though Todd may be in a bit over his head. Phelan is clearly a master at the manipulation trade. He's got no scruples, even willing to go so far as to pull Alex into his scam though he did seem to be slightly reluctant until Alex insisted.

So how is this all going to end? As far as I know, Connor McIntyre is staying on the show so when this scam all blows up, and it will because that's how things work on a soap, I figure Vinny will be the one taking the fall. I have a feeling that Vinny will double cross Phelan and disappear with the money, leaving him behind to take the heat.  Maybe Phelan will turn Vinny in to save his own skin and will pretend that he knew nothing about it being a scam or that Vinny had a hold on him somehow and forced him into it. He could say that he invested a bit of cash, too, and lost it. Maybe he'll cut a deal with Todd to go along with it since Todd was in on the scam and is as guilty of suckering folk as Phelan.

The part that I found hard to get was the money they're spending just to fool people. They have glossy brochures and a model flat they're building to show people, in a building that... who owns? They have a temporary project office set up outside that old building, too. That's a lot of money spent to rake some deposits in though I suppose it's still going to net them quite a lot, depending on how many they're pretending to sell and if they're reselling the same flats to people.

I'm very interested in this storyline and am enjoying watching it unfold. Pat Phelan is one of the best villains Corrie's ever had and seems to be multi-faceted. He's not really very sympathetic and you don't believe a word he says even if he's telling Eileen he loves her. He's very good at saying what someone wants to hear at the right time. He's expert at timing what he tells to whom, whether it be a "confession" or admission or just bullshit to smooth things over. I love to hate him and that's a testament not just to the writers but to McIntyre himself who can convey 1000 words and the image of the wheels furiously turning in his head with one glance while his back is turned to his prey.

I like that they've paired him with Eileen who is always falling for the wrong fella, this being one of the worst. Yes, she's being played for a massive fool and she's going to pay for it. It was even better having Todd involved in the storyline Fantastic!


I can't wait to see what happens next.