Good Night, Jean and Thank you 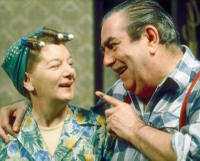 By now, you probably know that Jean Alexander has died. Jean played the legendary Coronation Street character, Hilda Ogden who was arguably the most famous character of all time. She may even edge out Elsie Tanner and Ena Sharples as the first one you mention when you think of classic Coronation Street. Jean passed away yesterday in hospital at the age of 90 and the tributes are pouring in.

I like the one in the Manchester Evening News the best, so far. Jean had a long career, starting out on stage with minor tv roles before Corrie but Coronation Street made her a household name. She played Hilda for 23 years. She went on to play Auntie Wainwright on Last of the Summer Wine for 22 years but Auntie W. never hit the same highs as Hilda. 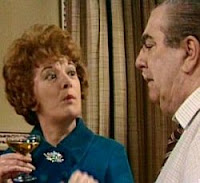 Originally, Hilda was meant to be a stereotype, an abused wife who was a shrill nag. But Jean brought something special to the role and Hilda was quickly fleshed out. She was still a shrill nag and a gossip but she was a downtrodden woman, always trying to make something better out of her lot in life. She was sympathetic most of the time as we watched her put up with a feckless husband and thankless children, battling with the neighbours who looked down on her as common when, in reality, they weren't all that much better themselves, most of them.

Hilda would find pleasure in small things like her "murial". She trilled a song when she was industriously cleaning or just having a good day. She knew who she was and wasn't afraid to stand up for herself though it didn't often do her good. Hilda provided some of the most famous scenes and lines in Coronation Street including proclaiming to her husband Stan, that the taste of her lipstick was that of "Woman, Stanley, woman!". 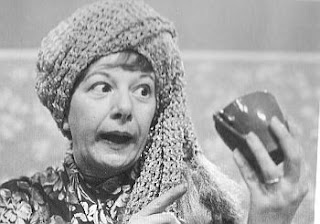 Who can forget her scraps with Elsie Tanner or the many times she brought Stan's tea into the Rovers since he was too interested in drinking to come home? She was convinced that she could tell someone's fortune through tea leaves. She worked all the hours she could to make ends meet since Stan was workshy more than he earned. Yet she worried when he was ill and she loved to look after her lodgers, first Eddie Yeats and in later years, Kevin Webster and his new wife Sally after they wed. When Stan died, Hilda's quiet grief had most of the viewers in tears along with her. 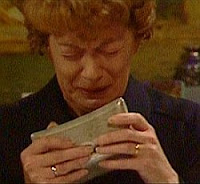 Jean Alexander was instrumental in creating and shaping Hilda. She was a consumate actress. She kept her private life private and never married. She was more concerned with establishing her career and felt that she would not be able to give enough attention to either a relationship or her career if she did marry and have a family of her own. She mentioned that several times in her autobiography which I read some years ago. It's called The Other Side of the Street: The Autobiography of Jean Alexander and while it's not available on Amazon, you might find it on eBay, or in a second hand bookstore or at the library.

Jean was a nice looking woman, too, but was made very dowdy for the role. There are a few photos on the news site above that were quite surprising. One showed her as she was in the early 60s and you might think, Oh she was older when she played Hilda but when she started on Corrie, she was only a couple of years older than in that photo. 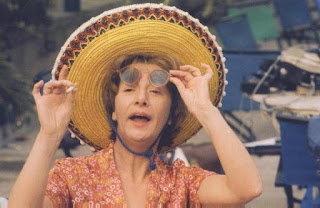 There was a good documentary about Jean as Hilda some years ago. I have it in two parts on my YouTube site, Part 1 here and Part 2 here.

I've only "known" Hilda from seeing older video of the show or reading books about Coronation Street's history. I didn't start watching until after Hilda left so she was not part of my Corrie viewing but I can appreciate her pathos and strength and that's all down to Jean Alexander. Maybe my own words don't have the same impact or eloquence as they would if I had grown up watching her on Corrie, but she was one of the stars of the show. Corrie went on without her but I do think there was a little something missing after Hilda moved away, leaving her good friends with a song. "Wish Me Luck as You Wave Me Goodbye".