David Platt is breaking my heart 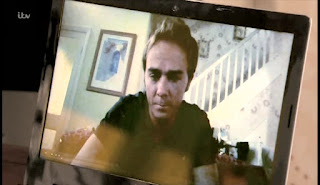 Say what you will about David Platt, from cheeky lad to tearaway troubled teen to family man and back to psycho Dave, he's never boring. I've been amazed to see how he's evolved and pulled himself through his troubled years to become a husband and father. He's even managed to have decent relationships with his brother and sister and his mother when you never thought you'd see the day. The only one of his relatives he seemed to pay any notice of was his grandmother Audrey and even then, it was (pardon the expression) hit and miss.

Now, after the death of his beloved Kylie, he can't cope. He's so filled with anger that he's retreating into himself and pushing everyone away including his children who need him so much. He nearly killed the brother of the young man that killed Kylie and would have if he'd not been interrupted by a nurse. That shocked me, that David could have gone to those lengths, because I don't want his character to leave the show and murderers always have to pay one way or another. Kylie is a case in point, even if she only killed Callum to save Sarah. 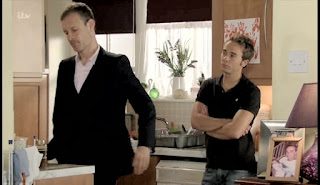 This storyline has also brought the rest of the Platts in to try to help David. Even Sarah, David's former nemesis, has shown that down deep, she does love her brother. The scenes between Nick and David have been wonderful. I never thought I'd see those two develop a real brotherly relationship and even his spiky relationship with his mother has softened. It's shown that David does love his mother even though they've had a very rocky relationship, but even his mother hasn't been able to help in spite of knowing what he feels like, she having a spouse murdered, too. 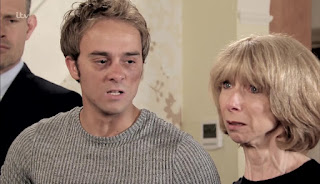 As I write this, we're about to head into a week where all will be revealed. It appears David is going to try to kill Clayton and expects he will die as well. The video he recorded was one of the best scenes ever on Corrie, loaded with despair and sadness and resignation from a character that spent most of his life as a cocky, cheeky git. He feels his life is over and even the prospect of being there for his children isn't enough to pull him back from the edge.

I have no idea what's going to happen. I'm pretty sure Jack P. Shepherd isn't leaving the show so somehow David will be prevented from executing his plan, no pun intended. Apparently, Gail and Nick are going to take action to keep David safe. Locking him in the basement of the Bistro could work but David is slippery and he'll probably find a way out. Short of parading his children in front of his car or a traffic jam keeping him from his goal, how's this going to come out?

We'll know by the end of the week. Top stuff, Coronation Street, keep it coming!

I am sure I saw an interview where Jack said he is NOT leaving the show.

With a new producer intent on putting the surprise back into the show, I wouldn't put anything past them. But I think if he was leaving, it would have been announced long ago. I'm lookign forward to seeing how this all comes out and I like that they haven't leaked the outcome.