State of the Street February 2016 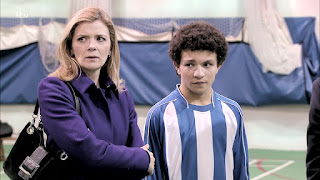 Even though Simon has been in counselling for a few months now, he's clearly still got some work to do on his anger issues. Well, you wouldn't expect this all to disappear right away. Or, you might considering how most storylines get pushed into a closet and never referred to again. But seriously, a kid tells his mother not to come to the football match, she does and flirts a bit and he gets enraged? Ok, it turned out he didn't hurt the other kid on purpose but that's not the point. He still hasn't managed his anger very well. Teenagers are supposed to be stroppy and moody but Simon's recent history has proven that he has more anger than the average 12 or 13 year old child.

In real life, of course this would be ongoing, with good days and bad but on a soap, where you don't want things dragging out too long, this is getting old. I hope this is the last we see of this storyline though the occasional reference over the next 6 months wouldn't go amiss, that is, someone asking how's Simon and Leanne mentioning that he's getting to grips with it all. End of. I do hope that Leanne does find someone that makes her happy but I also think it's probably a bit too soon, if only for Simon's sake.

Soaps always rely on standard plot devices to cause conflict. Thus, the lie, that lie that one of a couple refuses to tell the other one so that it comes out at the worst possible time from the worst possible person, usually. Viewers constantly shake their heads and wonder why people insist on keeping secrets if they love someone given every opportunity to reveal and clarify something. I can get why someone might not tell their partner that they're actively cheating or that they've killed someone. Other types of lies might be lies of omission where you did something dodgey and are ashamed and feel your partner won't want you anymore if they know. It might be difficult to tell the tale, naturally, but if someone really does love you, they'll understand. 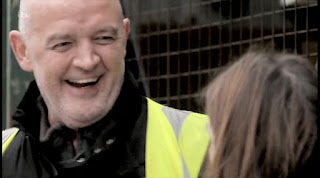 I'm referring to Anna sleeping with Phelan to absolve Owen of debt and Gary of a prison sentence, of course. Kevin, being a level headed, kind and understanding man, (*cough*) will forgive her. Ok, maybe he'll be pretty upset that she didn't tell him and maybe even think less of her that she did it. At first. But I do think that Kevin will also realize what a bag of scum Phelan is for engineering it all. I have a feeling that Phelan will twist it and say that Anna came on to him and they had a passionate affair, but something will happen at some point to make Kevin realize what a lowlife he is and he'll come crawling back to Anna, begging forgiveness. Kevin already saw a bit of the rougher side of him when he threatened her in the cafe.

Everyone else seems to think the sun shines out of Phelan's backside, especially Jason. Eileen has been seen to defend him as well though Michael's nose was put out of joint when Phelan was the one to fix the kitchen cupboards. Not one of life's DIY experts, Michael so he's going to feel a bit unmanned with a macho dude like the Patster around.

Jenny's return has been interesting. Kevin now holds nothing against her but Sophie is really upset. You can understand why but with Sophie, you also think she should be practicing that Christianity that she metaphorically speaks but her mother is egging her on and stirring the pot. A new friendship between Sophie and Kate might work but Kate's trying to see both sides of the situation and Sophie doesn't like that. My way or the highway? She's turning into a character that's not very pleasant and she's still showing a lot of immaturity for her age. Yeah, I get that she lost a loved one because of Jenny, at least indirectly, though she doesn't really even know that for sure like the viewers do. 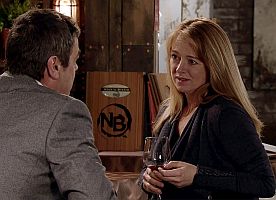 As for Jenny, I'm pretty sure she won't have changed all that much. She might not go back to being obsessed with small boys but I wouldn't count her out of the manipulation game, either. We saw Johnny make overtures of friendship with her. I reckon she'll see a path to security and latch on to him for what she can get. Yet another reason for Aidan to kick off at his father, which is also getting old. Grow up, lad. Nobody's perfect, including you.

Aidan is swiftly becoming a character I really don't like. I think they're trying to make him a mini-MikeBaldwin and it doesn't wear well on him. Mike Baldwin could be pretty nasty at times, for sure and he was ruthless when it comes to business but I still think Aidan has a long way before he's as savvy a businessman as Mike was. Aidan doesn't have that cheeky ducking and diving side that Mike had though it is something that Johnny has. Johnny doesn't have the ruthless side though I think he's pretty business savvy, it just doesn't seem to show as much.

I really don't buy Eva giving in to Aidan's flirting, not after finding out he slept with her for a bet with his sister. I would never trust him but she seems to have got over it. Now she's getting involved with the young Polish girl. I suppose these sorts of things go on, this "slavery" scheme though I expect it happens more often with young prostitutes. I'm not sure what I think of this storyline yet. I do suspect that Eva will get in over her head in short order. 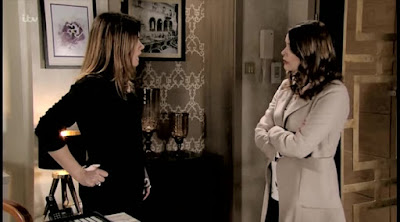 Another thing that's getting old is Tracy's vendettas against Carla. So much for her having a new outlook on life after her mother's death. That lasted about 10 minutes but nobody really wanted a kinder, gentler Tracy Barlow anyway, right? I know I've said all this before. Tracy, move on. You've got your fella, you heard him say how much he loves you, isn't that enough? I really hate how she's pushing Carla around and the old Carla would never have put up with it. I really think if Carla had told Nick straight away what she'd done with Robert, he'd have understood. The lie has gone on too long now. Carla should go to Robert and tell on Tracy but Tracy would certainly tel Nick so Carla needs to tel Nick and tell him now but apparently this storyline is going to drag on until their wedding in May. Or thereabouts. Make it stop!

Sally's council campaign has been infinitely fun to watch. She's also bought Lloyd's share of Streetcars for Tim who's infintely more interested in the biscuit tin. Steve will be back, and I think he'll be pulling his hair out.Tim really doesn't seem to want the responsibility of that sort of business. As for the election, I'm not so sure i'd vote for either Sally or Norris but I might lean towards Sally. Having her unable to decide where she stands on any issue is quite amusing but I think she'd be a fairly good councillor just the same.

We've been relatively Platt-free this month aside from Gail moaning about under floor heating now and then. Chesney is getting a bit green eyed now that Sinead seems to be launchinga modelling career. Zeedan has been struck by Cupid's arrow when he saw Alya's friend Rana. Not sure what I think about her but I'm not impressed so far. I hate women that flirt with anyone and everyone. She's already showing herself irresponsible, pulling sickies when she's not. She's conveniently a nurse and there was conveniently a job going at the medical centre. Now we just have to find her a flat near the street and maybe Alya can be her roomie. I think the flat that Julie and Brian owned over the Kabin is still empty and there is another one over the butcher shop I think. 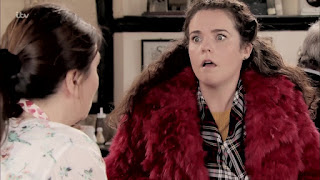 Finally, we have another "issue" based storyline with Izzy using illegal marijuana for her pain. There is no legal medical use of the drug in the UK though there is in Canada and some of the states in America as well as in Europe elsewhere. Izzy has a syndrome where she experiences chronic pain which is getting worse as she gets older and her condition worsens. She's discovered that the drug helps with the pain but it's a dodgey prospect, as she discovered, trying to get her hands on it. I wonder if this is going to lead to she and Gary getting back together? I can see him moving in to help with Jake at first and he still thinks a lot of her. Time will tell.