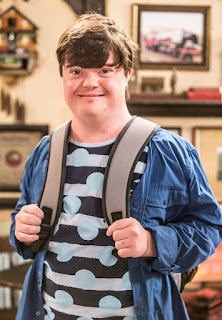 Nessa is the mother of Alex, a 28 year old lad with Down's Syndrome. He's pretty independent and often seemed to cause his mother worry when he'd go off on his own after an argument with her. He'd sometimes end up at his Auntie Cathy's house, looking for a sympathetic smile. We first met him under those circumstances. Cathy let her sister know where he was and that he was safe. Alex showed up again a few weeks later and Nessa came to fetch him that time.

It wasn't the first or the last time Alex would go walkabout, much to his mother's chagrin even if he often complained and moaned that he was 28, after all. And mostly, other than having to be told more than once that he should at least let his mother know where he is and if he's coming home, he seemed capable of looking after himself.

Enter Ken Barlow and Nessa's new crusade to bag herself a new man. Yet another one, if Cathy is to be believed. Seems Nessa regards men like children regard sweets in the candy store window. She just can't resist. So where's Alex now? So much for Nessa's over protectiveness.

The continuity of this is really doing my head in. The first time Alex came to see Cathy, she sent him home on the train. The train, people. And that tells me that Nessa lives a little distance away, perhaps not hours, but in an area enough of a distance from Weatherfield/Manchester to be using faster transport than a bus.

Now, Nessa is working at the salon and is quickly getting her feet under Ken's table. Is she taking the train every day to commute to her job? I know people do that, but there's been no mention of it.

And what about Alex? Nessa is so focussed on Ken that she must be leaving Alex to his own devices pretty much all the time, not just in the daytime while she works, but in her leisure hours, too, because she's with Ken a lot of the time, even overnight, now. But still, no Alex. No messages, no texts. I wonder if she let him know that she wasn't going to be coming home?  She doesn't seem to be the overprotective, anxious mother now. I would love to see Alex come looking for her because she didn't come home and didn't let him know she was safe! Tit for tat, right?

Why isn't Alex invited to a meal now and then with the rest of the Barlow family? What about Christmas? If Nessa is going to be part of the Barlow Christmas, will we see Alex, too? Inquiring minds want to know why the Powers That Be seem to have dropped the ball on this. Alex appears to have been used to introduce Nessa into Ken's world and now he's been forgotten.