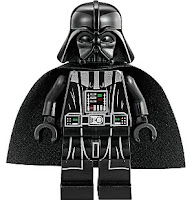 You've heard of the "butterfly effect" where one small change can have a large and long standing effect? This month, we've had a reappearance of what I like to call the Darth Vader effect where a close family member or, in this case, a close family friend turns out to be the biological father of one of the Corrie characters. The term harkens back to the Star Wars series when Luke Skywalker's mortal enemy, Darth Vader, revealed himself to be Luke and Leia's biological father, Anakin Skywalker.

It isn't new. It's quite well known in the soap world. Aunties or Uncles or mortal enemies (see above) turn out to be the real mothers or fathers of children. (This is rampant in American soaps where long lost children are reconnected with biological parents more often than the Muppets had movie sequels!)  Sometimes a character thinks their parent has died but then they turn up very much alive. This happens on American soaps frequently, too. Sometimes adopted parents, or one of them actually is the biological parent of the adoptee. Often, a man discovers children he didn't know he had, from an ill advised affair or a long lost love. 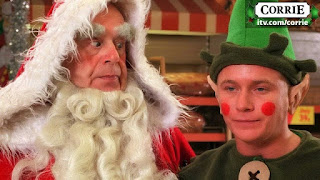 On Coronation Street, we've had "Uncle" Fred Elliott revealed as Ashley Peacock's biological father from an affair Fred had with a coworker. Ashley was reared by Fred's sister and brother-in-law. I don't recall if Ashley knew he was adopted or not but when the storyline was on our screens in the late 90s, Ashley's "father" had already passed away. Ashley and Fred became very close, a proper father and son team. 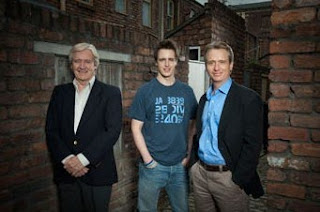 When Corrie first aired in 1960, Ken Barlow had a pretty girlfriend. Susan Cunningham. They drifted apart and Ken was shocked to discover that Susan had his son. She'd sent a letter that got lost behind a skirting board before Ken received it. Emily Bishop, who lives in the house Ken grew up in, discovered it and passed it on. The letter revealed the child's existence. Ken tracked Lawrence Cunningham down and met him though Lawrence was revealed to be a bit of a prat. Lawrence's son, James, took full advantage of his new grandfather and engineered a scam through a homeless shelter. Ken has no contact with either of them as a result. 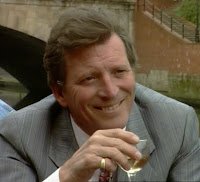 Mike Baldwin is the king of the Darth Vader Effect. All three of his sons were unaware of his existence for a time, and two of them were also unknown to Mike as his children.

After Mike Baldwin's brother died, his sister-in-law revealed that her son, Danny, was Uncle Mike's biological son after an affair they'd had many years ago. Mike was delighted to have another son though Danny was less than impressed. In the end, though, Danny took care of Mike when he had Alzheimer's and was genuinely sad when Mike died. This wasn't Mike's first time discovering an unknown child. His ex-wife, Susan Barlow, left him after apparently having a termination, not wanting to bring up a child with a husband she had fallen out of love with. Turns out she had the baby, a son named Adam, and never told anyone but her brother, Peter. It was quite a shock when the truth came out and there was the inevitable clash between Mike and his old enemy, Ken. Mike also had a third son, Mark Redmond who didn't know Mike was his biological dad until the mid 90s when Deirdre let the secret out to Tracy who in turn told Mark out of spite.

Curly Watts found out he had a daughter he didn't know about. His former wife, Raquel, came to him on the eve of the Millenium to tell him she had his daughter, Alice. Alice knew about daddy but daddy didn't know about Alice which was kind of a rotten thing to do. Raquel was bringing Alice up in France where she was working and had come to Curly for a divorce so she could remarry. Alice would be 18 now!

Don't think the women are left out, either though it's not as common. Women know they've given birth but sometimes the child doesn't know a specific woman is their mother. Leanne knew her mother had left when she was small and was dismayed to find that the new Rovers manager, Stella Price was her mother. (Stella's not an overly common name. I wondered why Leanne never mused "Oh, my mother's name was Stella" in front of Ms. Price) . Other soaps have had aunties or older sisters turn out to be the mother of a niece/nephew/younger sibling, but I'm not sure that has happened on Corrie, has it? Michelle Connor discovered the son she raised for 16 years was actually someone else's child altogether, the babies having been mixed up in the hospital. She never bonded with her biological son and that storyline is really best forgotten. 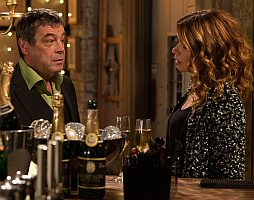 Johnny Connor, a newly arrived relative of Michelle's family is the latest in the line of men to have surprise children thrust upon them. He had a one night stand with Carla's mother 40 years ago and had always suspected she might be his daughter. But Carla's mother was a drunk and was not a faithful wife to her equally unlikeable husband so he could never be sure. Carla's brother revealed that his mother once told him about the fling though Rob never really believed her. He proposed the idea to Johnny as a fishing expedition and came up with a hefty catch.

It looks like it just might be true though so far, there's no real proof. Johnny will get a DNA test, however, and we'll know for sure soon enough. I'm pretty certain Carla will be Johnny's daughter and then we'll see scenes of her "reeling" when she finds out the truth. As much of a "lad" as Johnny is, it seems like he'd have been a much better father to her than the man that brought her up. He does seem to love the other two children he has, Aidan and Kate. She should be relieved, not upset, but as this is a soap, Carla will go off the deep end again while she gets her head round it but I predict they'll end up with a close father-daughter relationship in time.

Edited to add, thanks to commenters on The Coronation Street blog:
Jason Grimshaw and Julie Carp nearly had sex. Julie's mother, an old friend of Eileen's then revealed that she'd slept with Eileen's father who had seduced her when she was a teenager and Julie was the result. Therefore, Julie and Eileen are half sisters.

Maggie Clegg ran the corner shop for awhile. Her sister, Betty, helped her out. Betty, of course, was Betty Turpin, later Williams who served behind the bar for many a year. It turns out that Maggie's son, Gordon, was Betty's son from a relationship during the war. Betty was unmarried at the time so her married sister, Maggie, raised the boy as her own. As Maggie was leaving Weatherfield, the shop was handed over to the Hopkins family who found Gordon's real birth certificate in the shop flat. Maggie then told Gordon the truth.

Lloyd had a fling with the wife of his best friend, Johnny. He never know that Jenna was his biological daughter until she was nearly 30 when he bumped into Jenna's mother, Mandy at a gig. She was acting a bit odd, not really very happy to see him and eventually, once he met Jenna, Lloyd figured out the truth. Jenna and Lloyd eventually became close before she left town.

Bet Lynch had a son at the age of 16 and gave him up for adoption. We don't know if the boy knew he was adopted but when he was in the army he came to find his natural mother. He saw a tarted up blonde behind the bar who was kind of cheap and a big flirt and decided not to tell her who he was. Later, another soldier came to tell Bet that her son, Martin, had died.

Hayley discovered that she had fathered a son before she transitioned, during a short relationship with a friend. She and Christian found each other but it didn't go very well. Christian was resentful and hateful and even violent when he first found out the truth and a few years later, came back to "make up", and introduce her to his children but really, he just wanted money. In the end, Hayley gave it to him and he's not been seen since.

Audrey had an affair with Ted Page when she was a teenager and Gail was the result. She always lied about who Gail's father was but he came back into their lives and Audrey told him he had a daughter. Ted told Audrey he was gay which rather surprised her. Ted and Gail became close and he gave her away at her wedding to Richard Hillman. He continues to live in London.