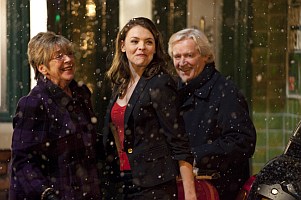 People die every day and it's always sad and heartbreaking. When someone well known/famous dies, the media goes over the top commemorating their career and it doesn't seem fair to all those people who pass away without mention.

When it's an actor that you've followed for a long time, admired and respected, that suddenly dies, people do pay attention. Tributes pour in and there's a lot of attention. It must be difficult and comforting as well for the loved ones left behind to see their beloved splashed all over the front pages of all the newspapers and on all the news shows but it must also be nice to read all the nice things about how that person brought a little joy into the lives of fans.

Anne Kirkbride played Deirdre Barlow for over 40 years on Coronation Street and she died last night, after a "short illness". They haven't said what that was and it doesn't really matter. She was an iconic character on the show. You would be if you were in it that long.

Deirdre was a quirky character and much loved. She was known for her huge glasses frames and her husky voice. She had a bad perm in the 80s and she had her share of fellas, ultimately going back and forth to Ken Barlow mostly.

The actress asked for a leave of absence last fall and it seemed odd that she would have timed it that she'd have missed some crucial storylines. I assumed it might be a bout of depression brought on by overwork but perhaps it was the illness that eventually killed her.

They will write her death into the storyline (where she's currently away visiting a friend) but it will take a few months before we see it on screen. They film 6 - 8 weeks in advance and need lead time to devise the story and aftermath so i doubt we'll see anything until late spring earliest.

Her character will be missed on the show, very much and of course the actor herself will be missed by her loved ones and friends.
Posted by Tvor at 10:59