Be afraid, Tony, be very afraid 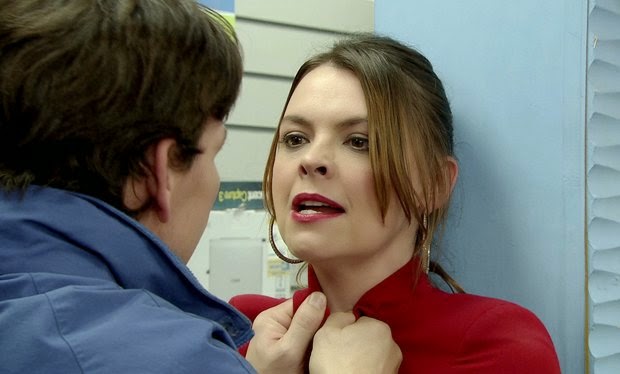 Did you see the way Tracy took that yob out the other night? He sold off stolen goods, fancy countertop mixers, and when Tony told her they were stolen, somehow she got hold of the seller and told him she wanted her money back. He wasn't about to and she provoked him into roughing her up. If that had been Todd, he'd have given the man the keys to the kingdom and run away screaming but not our Tracy.

It pains me to admit it, but I had to admire her. She's not afraid of anyone much less a posturing little toerag like this guy. She's brought down bigger and badder men that that with a blunt instrument and she used another one, her knee, to reduce this one to a snivelling muppet. Tony set the whole thing up. as we discovered, and his plan was to be the hero, saving Tracy from a dire fate worse than death. But there she was, all red lippy and defiance flashing in her eye and his plan went south. You can't really rescue a dame that can hold her own in the ring and yours in her handbag.

Tony's just going to have to get his hands on her business some other way but if I was him, I'd rethink that plan. He might think he's not stupid enough to fall for any of her tricks but he doesn't know Tracy Barlow like we do. She may end up allowing him to own part of the business so that she doesn't go bankrupt and she may end up coercing him into her bed so that she's not cold at night, but I reckon Tracy will get the upper hand in the end, don't you?
Posted by Tvor at 09:03