What's next for Fiz and Tyrone? 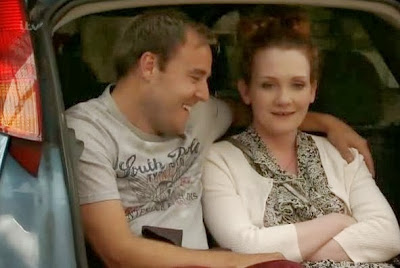 I'm chuffed to little mint balls that Fiz and Tyrone have made their way back together. There have been times in the past that I didn't think they would be suited back together but as time went on and both struggled through terrible and hurtful relationships, they grew up Their friendship never suffered though was sometimes forgotten by the writers.

While Tyrone has lots of mates on the Street, none of them were willing to stick their oars in the muck that was the disaster of Kirsty Soames. Fiz was more than willing to help her old friend at the expense of her own safety! Inevitably, they fell back in love and once Kirsty was packed off to prison, they reunited properly and I couldn't be happier.

What's next for the new family? Will there be another baby in the future? With Hayley's imminent demise, the only stable couple on the Street will be no more. I think that Tyrone and Fiz will be the up and coming replacement and I think they're well suited. They'll probably row, they'll have their ups and downs but ultimately, their love will keep them together long term.

I thought this morning about whether they will continue to live in the Duckworth house because for all of us longtime watchers, it will ever remain thus named. On one hand, it would be a nice continuation with tradition, where Tyrone was so close to Jack and Vera. But on the other hand, they have two little children with the possibility of a third down the road. Things will get crowded even though we viewers realize that most of the houses have elastic walls.

That brings me across the road to Number 6 where the Windass Armstrong lot live. Number 6 has long been a transient house. The owners or renters have never stayed there very long so maybe it's fair to assume that at some point Owen will sell up and they'll all move away. Some of you out there may plead for this outcome. They aren't my favourite family by any means but aside from a low level constant annoyance (with spikes for that dreadful Katy) they mostly fly under my radar. I can see Fiz and Tyrone buying Number 6 to have a bit more room and a proper garden for the little ones. I'd only worry that this could spell the beginning of the end for them considering the history of the house's occupants. Yes, maybe they should stay where they are, under the angel wings of Jack and Vera.

There has to be a wedding in their future though I don't picture Fiz in a white frothy dress coming down the aisle in a church on Chesney's arm. Fizz Dobbs has a strangely cute ring to it! It almost sounds a bit like Sean's nickname for her, "Fizz Bomb" doesn't it? Anyway, I predict the wedding will be a low key registry office do, and we may not even get to see the actual ceremony. Perhaps they'll elope while on holiday. It would be a bit of an anticlimax really, after all they've been through.

Whatever happens, I really, really hope the powers that be don't break up this lovely little family. I hope they do let them take the Cropper mantle and carry on the tradition of having that one stable couple that everyone can point to as a good example of how to do it right.
Posted by Tvor at 09:48